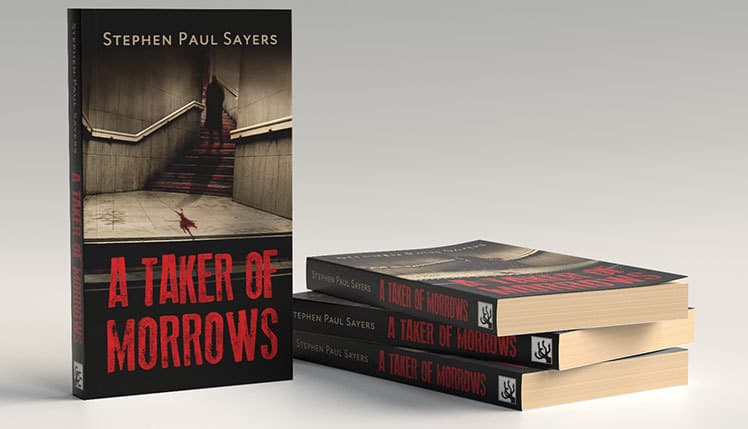 A Taker of Morrows

New author creates an afterlife of good and evil

Stephen Paul Sayers never thought he would be an author. Fiction writing seemed the furthest thing from what this research scientist and University of Missouri professor knew, but his profession was the cornerstone on which the protagonist in his first novel, “A Taker of Morrows” (June 2018), was built.

“I read something my daughter wrote a few years ago, and I couldn’t believe how good it was,” Sayers says. “And I told her, ‘I could never do that.’ But, she told me that I should try.”

After writing research grants and scientific papers for years, he says it was like a creative switch was flipped. “I decided I wasn’t going to just write her a book, I was going to write her a good book.”

Sayers knew very little about fiction writing, except what he knew from reading Stephen King novels.

“Since I was a kid, my brother and I watched horror movies all the time. The ’70s and ’80s were the golden age of horror movies, and we got really into it,” Sayers says. “That’s when I discovered Stephen King, and I started reading everything he wrote.”

Originally, Sayers thought he would write a 100-page book for his daughter, but it quickly became something much bigger. So, he attended writing conferences to explore the craft of writing. About a year later, “A Taker of Morrows” was ready to go to the editor.

While Sayers draws on the impression Stephen King made on him in his childhood for the genre of his novels, the plot
inspiration is not as clear-cut. “The story is really about the ongoing soul journey and where-we-go-when-we-die kind of stuff,” he says. “Not in a religious way at all; but it’s about that ultimate question that is on everyone’s mind.”

Instead of creating the stereotypical heaven-type afterlife, Sayers wanted to write about something less obvious. “I wanted to be completely different — it’s this place that’s very much like this — there’s good and evil and life just kind of continues on, so it’s neither better or worse.

“I had this idea in my head for a long time, and I decided to expand on it a bit.”

In “A Taker of Morrows,” Robert Granville, a college professor, discovers a world he didn’t know existed, a battleground between good and evil. There are caretakers, who protect earthly souls, and jumpers, who prey on them.

While Sayers says RG is not patterned after him, there are certain elements of people he knows in all the characters. Sayers didn’t intentionally model any characters after people he knew, but his sister noticed, after reading it, that he had.

“My sister found something that was amazing,” Sayers says. “I had no idea I had done this. The main character’s best friend is this pony-tailed, scruffy kind of guy that’s deep and reads a lot — he’s just this kind of Renaissance man. My sister read the book and said ‘Oh, that’s your buddy from high school in the book.’ And now when I look over the character, I think wow that’s him to a T. … Some people are in the book and may not want to be, but little bits of them are.”

“Everything is a series these days,” Sayers says. “You set so many things in place, with so many characters and plots, why reinvent it? If they are interesting characters and the book is good, people probably want to see them again.”