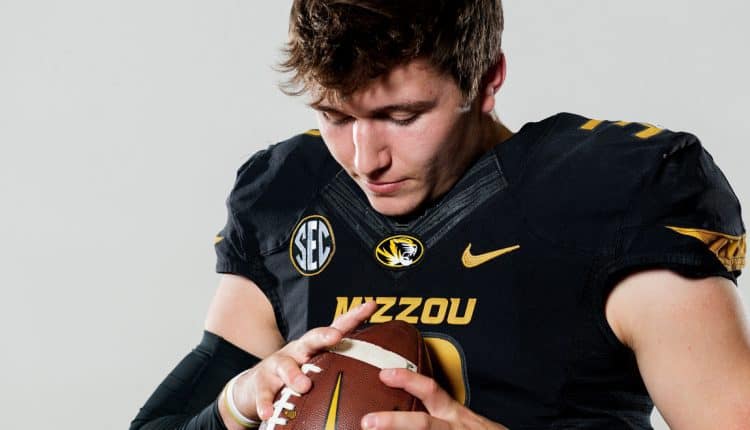 In the visiting locker room of Reynolds Razorback Stadium, after nearly four hours of battle on the field, Lock found a moment of peace with Beckner and Coach Barry Odom.

All three had done their parts to secure a 48-45 Missouri win over Arkansas, the Tigers’ third in the past four years over their rivals. Odom stalked the sidelines, working the officials for calls and keeping his players’ heads cool in fraught moments. Beckner had logged a sack and two quarterback hurries, along with helping hold the Razorbacks’ potent run game in check. Lock had thrown for 448 yards and five touchdowns — his fourth game of the year with at least five passing scores — and completed all three of the passes he threw for 43 yards on the Tigers’ game-winning field goal drive.

The three shared a quiet moment. And a sweaty hug.

“We talked about how this is why we came here: to play games like that, come down to the wire and beat Arkansas for Missouri,” Lock says. “Memories like that are why we came here instead of all the other schools we could’ve gone to.”

Missouri football was a consistent presence in Lock’s life growing up. His grandfather, Jerry, played for the Tigers in 1961-62. His father, Andy, was a four-year letterman as an offensive lineman from 1986-89 and a team captain his senior year.

So trips to Columbia from his home in Lee’s Summit were pretty frequent, and not just to see the football team. His mother, Laura, was a star athlete at Centralia High School and is a Columbia College alumna. His maternal grandfather, Steve Albert, owns a shoe repair shop in Centralia, and his aunt lives in Fulton.

Though he grew up in the Kansas City area, Lock was actually born in Columbia.

“This place doesn’t get enough credit for what it is,” Lock says. “It’s not down south, necessarily; it’s not a beach place. It’s literally right in the center of the country. People maybe get turned off by that, but once you get on this campus and even spend a semester here, you’ll probably fall in love with it. At least I did, or more than I was already in love with the university.”

Lock came to Missouri in 2015 with the understanding that he would probably have to wait his turn. He was joining a team that had just won its second straight SEC East championship and was returning the starting quarterback who took it there: junior Maty Mauk. The true freshman dazzled in fall practice and earned a spot as Mauk’s backup, with a planned series thrown in for him here and there to get his feet wet. 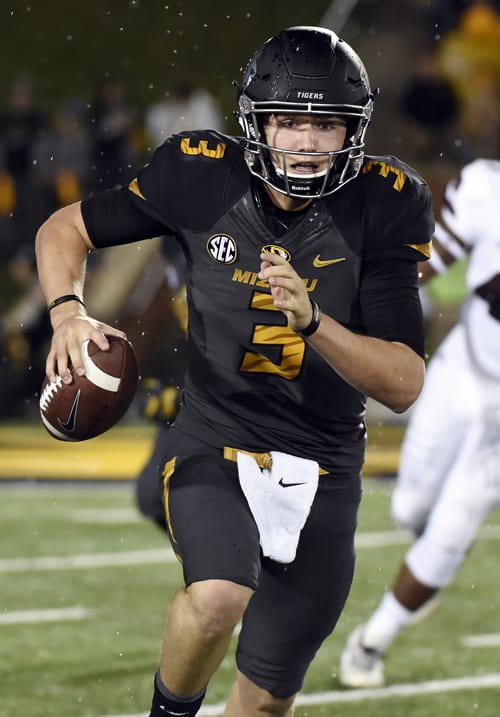 Back to School
Drew Lock scrambles during the first half of the game against Mississippi State.

It was the same tack then-Coach Gary Pinkel had taken with quarterbacks such as Chase Daniel, Blaine Gabbert, James Franklin and Mauk, and it had worked quite well.

Then Mauk was indefinitely suspended from the team. Lock had no choice but to be the main man. He wasn’t ready, and a deeply flawed offense around him didn’t help much. He managed only four touchdowns against eight interceptions as the Tigers limped to a 5-7 finish.

“Having to go in there and do it as an 18-year-old, it was something I thought about. But once it came to me, it was like, ‘Wow. This is real life,’” Lock says. “That was obviously not the best year for us and for me as a quarterback. It was pretty much using what I did during that year and not ever doing that again, whether it was the way I prepped, the way I ate, slept, the way I walked through the halls. It was just getting away from that.

“I’m glad I got to do that my first year, then had things start to change around and get better toward the end of my career.”
Lock and the offense’s performance improved considerably under new coordinator Josh Heupel in 2016, but the Tigers still struggled to a 4-8 record. Halfway through his junior season last year, Missouri stood at 1-5 after a trouncing at the hands of eventual national runner-up Georgia.

Then, the switch flipped. The Tigers won six straight games and earned a berth in the Texas Bowl. The offense scored 51.3 points per game over that stretch, and Lock averaged 329 passing yards per game and threw 26 touchdowns against only five interceptions.
Lock’s 44 touchdown passes for the season broke the program record of 39 set by Daniel in 2008. They also broke the SEC record of 42 set by Florida’s Danny Wuerffel in 1996.

Wuerffel won the Heisman Trophy. Daniel was fourth in the 2007 voting. Indeed, Missouri has begun Lock’s 2018 Heisman campaign in earnest, complete with a bobblehead in his likeness. Not that Lock notices.

“I approach it the same as if I was the worst quarterback in college football,” Lock says. “I’d keep my mindset the same, go out to prove myself right, prove others wrong and win football games with the team that I love and at the university I love.”

After the regular season, Lock sought an opinion on his pro prospects from the NFL Draft Advisory Board, a group of general managers and personnel directors who assess underclassmen considering a jump to the NFL and give them one of three recommendations: possible first rounder, possible second rounder or go back to school.

Lock got his answer before the bowl game against Texas: Go back to school. Still, he had heard enough buzz to think there might be teams out there who liked him more than the board.

“I was trying to grasp as much information from as many sources as I could, but making sure they were legit sources. There are a lot of people that can tell you what you want to hear, to try to persuade you,” Lock says. “You get teams who fell in love with you, like, ‘Dang, I really like this guy.’ Then a couple teams that thought I needed to work on some stuff. That was probably the telltale sign for me. It was kind of a 50-50 shot.”

Lock consulted with the people who knew him best: his family, Odom and Heupel, who still helped guide Lock through the process after leaving to become UCF’s head coach in early December. He looked at what the Tigers had returning from their prolific 2017 offense — eight starters besides himself, including all five offensive linemen — and watched as Odom brought in former Tennessee head coach and Dallas Cowboys receivers coach Derek Dooley to be Missouri’s new offensive coordinator.

The choice was pretty clear.

“It speaks a lot for this program and this coaching staff, just how much we want to play for this university and this state,” Lock says. “I’m hoping this senior season has something I can actually hang my hat on and be really super excited about.”

Lock knows he can still improve on his accuracy and his decision-making before going to the league. He also knows that the complexity of Dooley’s offense will give him more of a chance to show off his field reading and route progressions than Heupel’s pace-dictated, quick-strike attack.

And he knows how much is still out there for this team, the one that he’s been watching since he can remember.
“Inside the building, we have a lot of momentum,” Lock says. “I’m not really sure what others think about us. I don’t read into it very much. We’ve got a little spunk behind us this year. We’re excited to get on the field and prove it.”