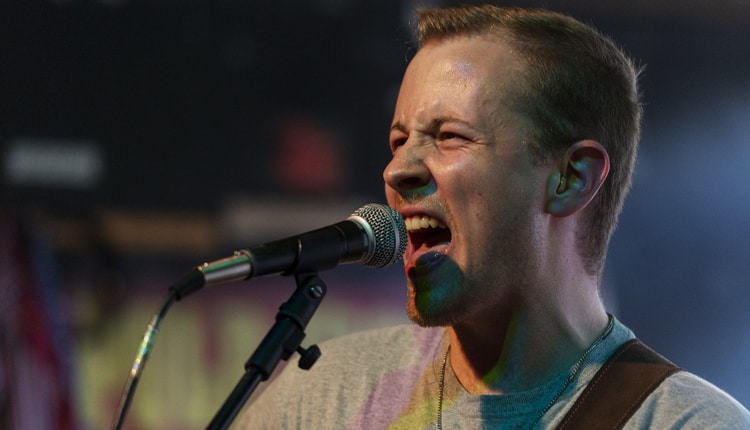 Fourteen months have passed since Aaron Schilb, a Columbia native and Mizzou-made musician, embarked upon his Nashville pilgrimage, leaving the plains of the Midwest in his rearview. This past summer, he performed back in CoMo, excited to share what has transpired in the past year, how his mid-Missouri heritage has affected his present success and what he hopes his future holds in his new Nashville home.

Schilb was in Columbia for a little less than 24 hours in July, so it was vital that he fit in some of his favorites while he could: an Eastside Tavern performance, coffee at Kaldi’s and, if time allowed, nachos from Addison’s or a few slices from Pizza Tree. It was a quick trip, but he was thrilled to be home, even if only for a day.

“This is definitely a nostalgic trip,” Schilb says. “It’s cool to come back to Columbia and say, ‘Look at me, I’m a professional now. I grew up.’ I love coming back here to play shows for people!”

Schilb was happy to give bandmate Christopher DeLisle, a fellow Midwesterner by way of Indiana, a whirlwind tour of life in his hometown. While Schilb notes that he “absolutely loves” living in Nashville, he also admits that the popular Tennessee town is missing a few things that he became accustomed to while growing up in Columbia. Aside from his favorite food stops, Schilb recounted his frequent use of the Katy Trail, admitting that this outdoor activity is one thing Nashville has not provided.

More importantly, Schilb’s move to Nashville meant leaving his family behind. “All of my family still lives in town,” he says. This list includes his dad, two brothers, grandparents, cousins and a nephew. “Everyone lives here. I’m the only one who ever left.” 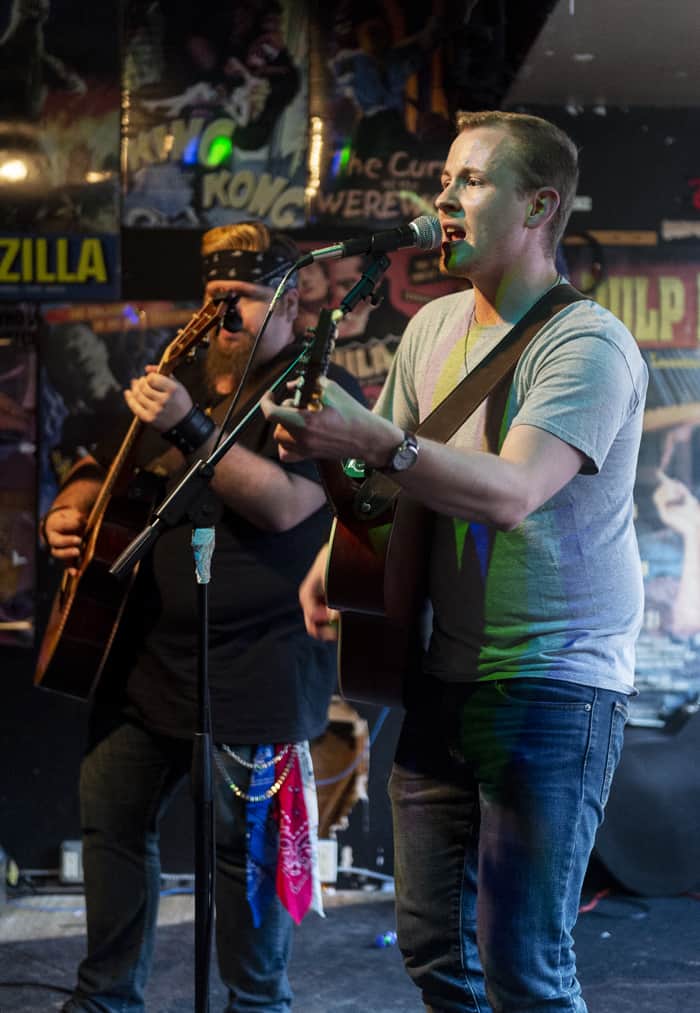 Migrating from the comforts of the Midwest was a coming-of-age decision for Schilb, who had never known a life anywhere else; however, he understood that if music was something he seriously wanted to pursue, Nashville was his land of opportunity.

“There are just endless career opportunities in Nashville,” Schilb says. “There are more live music venues there than anywhere else in the United States.

“We’ve gotten better since moving to Nashville just because you have to get better,” he says. “You can’t ever bring your B-game in a city where everyone has their A-game all the time.”

Not only must Schilb and DeLisle’s three-month-old band, Dirt Road Degenerates, compete with the “best of the best”; they also must compete with themselves, particularly Schilb, who has seemingly insurmountable odds stacked against him.

“When I was 10 years old, I was diagnosed with otosclerosis,” Schilb says. The condition is “basically where the bones in your ears harden together because there’s too much calcium.”

This overproduction of calcium eventually causes permanent deafness in those afflicted. Doctors assumed that such a diagnosis would surely stop Schilb in his tracks, bringing an abrupt end to his musical aspirations. Schilb had other plans.

Blame It All on My Roots

Early on in his life, Schilb was turned off at the thought of pursuing anything music-related, simply because he wanted to be different than his family. His dad, a pianist, choir director and music pastor; his mom, a composer, choir director and music teacher; and his brothers, both instrumentalists, caused Schilb’s initial aversion to music. “I used to watch my family and think, ‘I’m going to be the one who doesn’t do that.’ ”

Schilb held this view until a couple of unconventional sources ignited the musician within him. He credits this awakening to playing the popular video game “Guitar Hero” and watching the 2003 classic comedy “School of Rock.” Those two experiences gave Schilb the itch to switch from family-mandated piano lessons to teaching himself the guitar.

“I very delicately confronted my dad about it,” he says. “He told me, ‘That’s OK, but you have to practice.’ Lord knows he didn’t expect me to, but I got my first guitar, shut my door and taught myself how to play.”

Despite the fact that without his hearing aids Schilb is legally deaf, his diagnosis has never tainted his dreams to play music. Flash-forward to today, Schilb can be found playing any one of the following: acoustic, electric or bass guitar; piano; harmonica; ukulele; and even the accordion. He credits his somewhat stubborn attitude to his Midwest roots.

“More than anything, [growing up in Missouri] has influenced my work ethic,” he says. “I grew up in a house, as Chris did, where you work for what you want. If you want something, you just go do it.”

With their array of musical abilities, as well as their kindred spirits, it was only a matter of time before Schilb and DeLisle crossed paths in Nashville.

“Let’s talk about Jan,” Schilb says. Jan Buckingham, the woman credited for bringing this duo together, is a twice Grammy-nominated songwriter whose work has been picked up by the likes of Whitney Houston, Tim McGraw, George Jones, Lee Greenwood and Pam Tillis. Both Schilb and DeLisle encountered Buckingham by happenstance.

“She introduced us, and it was her idea to tell us to play together,” Schilb says. “When she saw us finally playing together for the first time, she was like, ‘Oh my gosh! Y’all have to be doing this together as a full-time thing!’”

Eventually, Schilb discovered that the woman responsible for introducing him to his bandmate was also a Columbian. “Jan’s a Mizzou grad too,” he says. “She’s even taught masterclass symposiums at Mizzou and Stephens [College]. Talk about a coincidence!”

Columbia connections did not stop there. Buckingham introduced Aaron to a Nashville publishing company whose owner was also from Columbia. “She’s a Hickman High School grad, just like me,” Schilb says. “It’s just crazy how I fell into this little circle of people in Nashville who are from Columbia!” 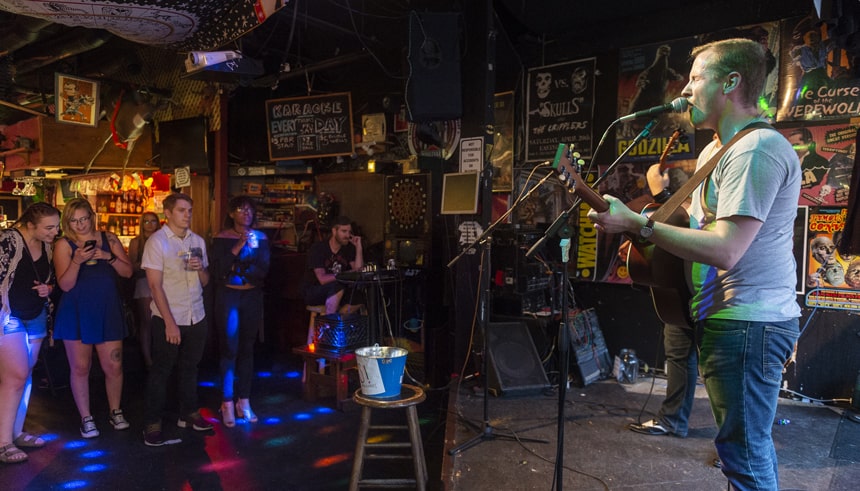 Although their band, Dirt Road Degenerates, is still in its infancy, these two musicians are anything but beginners, bringing a combined total of more than 30 years of experience to their band. Their fun and upbeat sound is a refreshing step away from the traditional pop country that so heavily permeates Nashville.

“We’ve been told several times that we’re doing something in Nashville that no one else is doing,” DeLisle says. He calls it “swamp rock” — a dirty, backwoods, country rock mixed with blues sort of style.

“Yeah, we’ve been told we’re ‘as subtle as a sledgehammer,’ ” DeLisle confirms. “We’re proud of that, though. That’s what we’re trying to be!”

One song that frequents their set list, “Rock & Roll Degenerate,” is part of their band’s namesake. “It’s the story of how the doctors told me to stop playing music because it was going to make me go deaf faster,” Schilb says. “Basically, the song is about me telling those doctors where to shove it.”

As for the future of Schilb’s hearing and, consequently, that of Dirt Road Degenerates, he is confident: “Until I can’t play music anymore, [my hearing loss] won’t affect my career path. There’s never been another
option for me.”

Yesteryear: Looking Back at Boone County