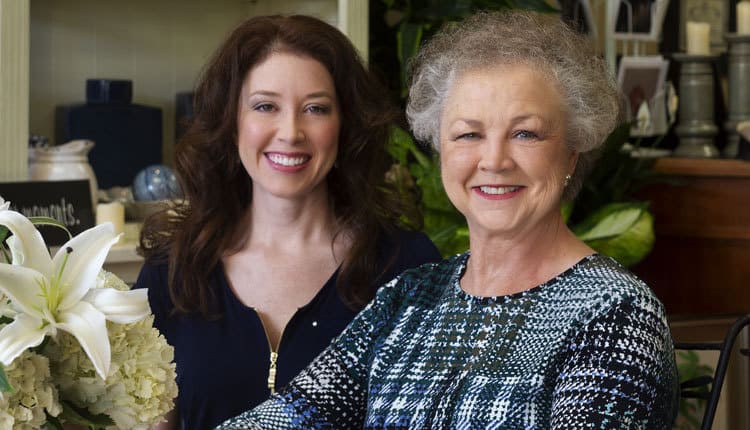 Allen’s Flowers is a perennial of a business that has thrived in mid-Missouri’s economic environment for the past 76 years. No matter the season, its floral arrangements have made homes and celebrations more festive. And the quiet beauty of the store’s flowers has made solemn occasions more bearable.

Columbians who have enjoyed shopping for bouquets and gifts at the store’s Ninth Street location might drive by the storefront and think Allen’s Flowers’ long history is finally finished. But it’s not. The business is still growing strong at its new location on 401 S. Providence. Sandra Ferguson, the store’s owner, is a floral designer by education, having long ago become an effective business owner by experience. In the course of a busy week, she may serve as the business’s remodeler, custodian, marketing director and customer sales rep. She created her first bouquets at a floral shop back in 1968 in her hometown of Richmond, Missouri, and she still enjoys arranging flowers a half-century later.

Ferguson is a soft-spoken woman, energetic and with an air of confidence. Growing up on a farm has prepared her with a can-do attitude. “I love the business,” she says. Like most successful small business owners, she enjoys the variety of experiences that each day brings. As she oversees a staff of four full-time floral designers (including her daughter, Amy) and a delivery person, she does whatever needs to be done — from drilling holes in a new counter to placing orders with her wholesalers to scheduling ads in local media. But what makes it all worthwhile is that she appreciates being part of the lives of the Columbians she serves. “That may mean consoling people with a death or helping with birthdays, parties or weddings. You never know. We also decorate homes and businesses,” she says.

Ferguson, who smiles as she talks about her work day, pauses for a few seconds, then says thoughtfully, “We love to make their lives happy and easy. People are so busy. They want nice things; they want their party to turn out right, and they call us to take care of it.”

Allen’s Flowers has been a part of the lives of mid-Missourians since Paul Allen bought Baird Flowers in 1942 and changed the name of the business. After Allen’s death, his wife, Naomi, married Edwin Bornemann, who kept the business going. Sometime in the late ‘50s, the business changed hands, with William Scofield becoming the new owner. Recalling the history of the business, Ferguson notes that Scofield sometimes delivered flowers on his bike. In 1973, Scofield placed an ad in the newspaper, seeking a floral designer. Ferguson applied for the job, got it and has never worked anywhere else since.

A decade after she went to work at the shop, Scofield died. The business survived, with Ferguson taking on the responsibility of managing the store for Scofield’s widow, Mable. Fourteen years later, in 1999, Ferguson bought Allen’s Flowers from Mable.

While generations of Columbians celebrated, grieved, courted and consoled each other with flower arrangements from Allen’s Flowers, the business world digitized, and the flower business evolved. If there’s a secret behind the success of Columbia’s oldest floral business, it’s that it keeps innovating and adapting to change. Ferguson’s daughter, Amy, has just returned from a Washington, D.C., training trip, where she learned the latest in floral design trends and techniques. Amy, in addition to her design work, is in charge of Internet marketing for the store. It’s an important responsibility, considering the number of national floral services that compete for consumers’ attention and money.

Few people realize it, but when they buy flowers from one of the national flower delivery companies, they pay an unnecessary premium, says Ferguson. The web-based companies are little more than order-taking services that pass the order on to local stores, such as Allen’s Flowers. The local stores then prepare and deliver the order. By going straight to the Allen’s Flowers’ website, customers can avoid the extra charges that the national services add on, Ferguson explains.

Operating a successful business is as much an art as it is a science. Her many years in the business have given Ferguson a sort-of sixth sense about running her store. “I’ve done it so long I can look around and say we need this and this,” says Ferguson. “That’s why I’m teaching Amy, so that one day she might take over the business.”

It’s not that Ferguson is looking forward to retirement anytime soon, but like other small-business owners, she would like to occasionally take a break. She looks over to Amy and laughs lightly. “I wouldn’t mind having a day or two off once and awhile,” she says.

Business Through the Ages