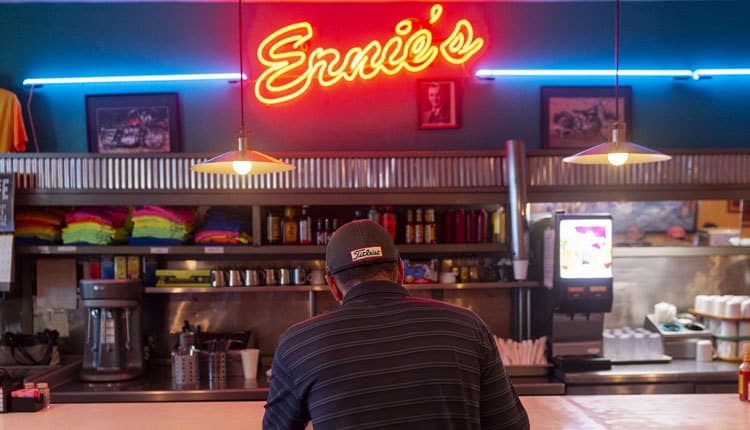 Tom Spurling is the man behind the diner

The scene at 10 a.m. on a Monday inside Ernie’s Café and Steakhouse is one that is happening at countless diners across the country. At one end of the counter, near the front door, a waitress, dressed casually in shorts and an apron, is accepting cash from a customer. Groups of customers are clustered in booths, others sit singly at the counter on metal stools, topped with red upholstered cushions. Tinny music comes from a small speaker, the melody almost lost beneath the clatter of dishes and the sound of 15 or so conversations rising from the tables.

But Ernie’s is not just any diner. Ernie’s has a special place in Columbia’s past and present. It is one of Columbia’s iconic businesses, both reflecting the area’s culture as well as defining it. And behind Ernie’s – and usually behind the grill – is Tom Spurling, owner-operator for the past 22 years and cook, as well.

Spurling was attracted to the restaurant because he liked its “unique personality” and the diversity of its customers. He’s worked to keep the personality and the customers. “I think we cast a wide net in our community,” he says. “We don’t have one pigeonhole in the market, but our clientele just about mirrors the community – judges, lawyers, doctors, students, homeless people, clergy, tourists, whatever…”

Ernie’s is a casual, comfortable place that blends the feel and style of a mid-century American diner with the ambiance of a European sidewalk café. It’s open from 6:30 a.m. — 2 p.m., and its menu features Boone County ham, “chopped cows” (hamburgers), a range of breakfasts and luncheon specials.

The inside décor is vintage diner – complete with black and white linoleum floor, a Coca-Cola sign on one wall, Formica tabletops and a room-length counter with a corrugated stainless-steel base accented by more stainless steel along the wall and kitchen galley area. If the Fonzie walked in, he’d feel right at home. A large picture window facing Walnut Street opens to a view of the restaurant’s front patio with its outdoor seating. Through spring, summer and part of the fall, Ernie’s customers can enjoy their coffee and meals beneath leafy trees, while watching Columbia’s downtown scene.

Coffee and soda, yes. Alcohol, no. Part of Ernie’s ambiance is its family feel, and Spurling enjoys it that way. “The number one priority in my life is family,” he says. One of the rewards of owning the restaurant and spending most days there is that Spurling can see how Ernie’s has become a part of the lives of so many other families. “We’ve had families who have come in with their kids, and when the kids have grown, they’ve come back from college, and they eventually come back again and there are grandkids,” he says.

There was an Ernie’s before Spurling, and there will certainly be an Ernie’s at Walnut and 10th Street for the foreseeable future. So far, the diner has had five different owners, starting with its namesake, Ernie Lewis, who opened the business in 1934 at a different location. For a while, Ernie’s had an upstairs dining room, called the Pyramid Room, which had been named after a local club. After Spurling took over, he converted the space into an apartment, so that he could provide better service in the main dining room. Gone, but not forgotten, the Pyramid Room lives on in Ernie’s menu, as the name for a group of sandwiches, the “World Famous Pyramid Clubs.”

A better-known part of Ernie’s history is captured in a drawing, framed and hung on the kitchen galley wall behind the counter. Chester Gould, the artist behind the long-running Dick Tracy comic strip, drew the fictional detective for the restaurant back in the ‘40s. Gould was a fan of the diner who would stop in when visiting his daughter, a Stephens College student.

Something about Ernie’s turns customers into fans. People don’t just eat there, they want to remember the experience and make each return trip into a memory. “I have a big clientele of parents who come in from Chicago — they have a community up there who are kind of Ernie’s friends and fans. We also have a contingent since we became SEC, people coming in from Alabama. It shows the community aspect of a restaurant, Spurling says, “we’re open to everybody and we’re all inclusive.”

Although Spurling makes occasional upgrades to the restaurant, he safeguards its image. “We’ve made subtle changes, such as painting and changing the art work,” he says, “but it’s still a diner. We’ve stayed consistent with the diner motif. Even the front was redone in ’96 in the art deco style that diners are known for.”

One thing about Ernie’s won’t change as long as Spurling still owns it. And that’s his commitment to his customers. “They come in here hungry, so we do the best we can. That’s the main objective of each day — to do the job and do it well.”