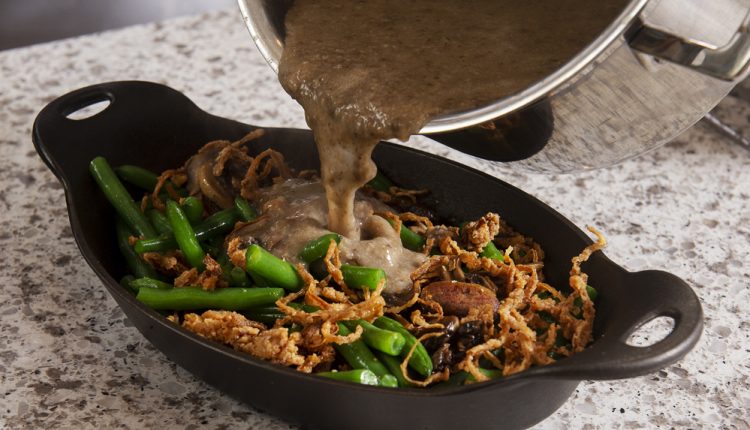 Take this holiday staple to the next level

Green bean casserole was first introduced in the 1950s and has grown in popularity, particularly at Thanksgiving. Although the original recipe was intended to be made with frozen green beans and canned cream of mushroom soup, I have made a few changes over the years. Like most dishes made during the middle of the century, someone found a way to break down each component and make each one a little “better.” Just like other preplanned dishes, some of these components can be done days or weeks beforehand and frozen until ready to combine.

Making a cream soup only takes a few steps. Most of the technique is just the ability to turn the heat down and simmer, stir and not scorch the bottom. Each ingredient builds the flavor of the soup. While the soup is cream of mushroom, the addition of onions, garlic and herbs will help build some depth of flavor. Sweating the onion and mushroom can add a much deeper flavor to the soup than just mixing the roux with raw mushrooms, adding stock and simmering. Adding a little garlic in can round the flavors out, especially with a little thyme, oregano and cayenne, if desired.

1 pound mushrooms, roughly chopped
1 medium onion, diced large
2 ounces butter
2 to 3 cloves garlic, roughly chopped
½ cup flour
1 quart chicken stock or milk (Stock will have a deeper flavor, milk a creamier, rich flavor.)
1 cup cream
Salt and pepper to taste
Directions:
Sauté mushrooms and onions in a saucepan with butter until mushrooms are soft and onions start to develop a little color on the edges. Add garlic and sauté for a minute or two until aromatic but without color. Add flour and incorporate with the butter to create the roux. Whisk stock or milk into the roux (not warmer than room temperature to help emulsify). Simmer for 15 to 20 minutes until flour taste has cooked away. Make sure to stir every few minutes to prevent sticking to the bottom. Once flour taste has cooked away, purée soup with a hand blender or stand blender. Add cream, bring to a simmer and season to taste with salt and pepper.

Contrary to how your green bean casserole might have looked growing up, green beans should be green. I know you want them cooked, but that does not mean they need to be cooked until all the color has faded away and the beans have lost all texture. Blanching can be your friend. Bring a large pot of salted water (about 1 tablespoon kosher salt per gallon) to a boil. Taste it; it should taste like the sea. Add in your trimmed green beans, stir for 60 to 90 seconds then remove and plunge into ice water. This can be done a day or two in advance. The blanching process helps to set the chlorophyll (green color) while also retaining the nutrients. The beans are now ready to be mixed with the cream of mushroom soup, baked, topped with onions and enjoyed.

In a large stock pot or saucepan, blanch the beans in about a gallon of boiling water with about 1 tablespoon of salt added to the water. Cook green beans for 1 to 2 minutes until the beans turn bright green. (This can be done in batches if needed.) Remove from water and put into ice water to stop cooking and set the color. Keep in the ice water for 2 to 3 minutes until completely cool; remove and reserve until needed. The beans can be blanched a day or two before making the casserole and kept in the refrigerator.

I know that the onions in the bag or cans are easy, but the taste just can’t hold a candle to freshly fried onions. Onions add a great texture, flavor and color contrast to the dish. They really are not that hard to do and can be made several days or weeks beforehand. Just keep them in the freezer to keep the moisture in the air from making them soggy. I do recommend making about twice as much as you need if you have “snackers” who like to come through the kitchen; the onions tend to disappear.

1 large onion, thinly sliced
1 cup buttermilk
Salt and pepper
1 cup flour, seasoned lightly with salt, pepper and paprika
Oil to fry as needed
Directions:
Soak sliced onion in buttermilk for a few hours to overnight with a little salt and pepper. When you are ready to make the green bean casserole, lightly coat sliced onions in seasoned flour, shake off excess and fry in 350-degree oil until brown. If you do this more than a day before making the casserole, put onions in the freezer to keep crisp.

Most of the components of this dish can be made days beforehand, or months beforehand and frozen. The actual bake does not take long. Most of the pre-made components can be assembled the night before you are ready to make the casserole. This way, you are ready to pop it in the oven once the more complicated items have been completed. Don’t feel confined to a 9-by-13-inch oven-safe glass dish. You can use just about any oven-safe pan or dish. If you have a cast-iron pan or another dish you would like to serve your casserole out of, feel free to give it a try.

2 to 3 pounds green beans, ends trimmed and halved (more beans for a drier, more bean-forward casserole)
½ pound mushrooms, sliced, sautéed and seasoned in butter or oil (Optional)
Oil, salt, pepper, water and ice water as needed
Casserole Assembly:
Mix green beans, sautéed mushrooms (optional) and about ¼ of the fried onions (the large clumps if you have any) together, lightly season with salt and pepper. Place mixture into casserole dish or another cooking vessel of your choice. Pour mushroom soup over beans, make sure it is about a half-inch from the top of the dish to prevent boiling over when baking. Bake for 20 to 25 minutes until casserole has bubbled throughout and the green beans can easily be pierced with a knife. Set on a trivet and cool for 10 to 15 minutes. Top with fried onions and serve.