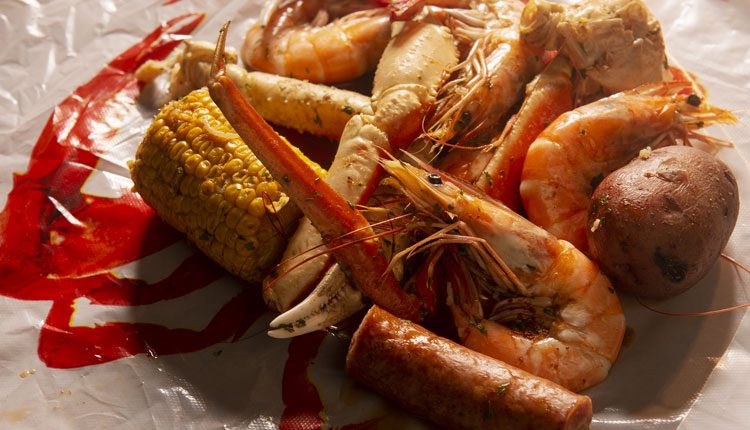 Feel the heat at the Cajun Crab House.

Around noon on weekdays, the parking lot is typically packed at Cajun Crab House, where Kevin Dinh and Linh Nguyen have been serving Southern-style seafood to Columbia residents for a little more than four months. The way Dinh tells it, though, the restaurant’s ongoing success is a bit of a happy accident.

“I had not planned to open a business here,” he says. “Actually, I didn’t plan anything.” A former resident of Columbia, Dinh had dropped by in December last year simply to visit an old friend while on a business trip to St. Louis and Kansas City for the wholesale seafood distribution company he and Nguyen were then operating out of Mississippi.

From there, Dinh says, what was only supposed to be a short visit quickly grew into a promising business opportunity. But upon searching for a suitable place to open a seafood market, he and Nguyen found that the only available location had been built as a restaurant — a business Dinh admits he had no experience running. Still, he says, he did have one more ace up his sleeve: “I learned Cajun cooking from one of my clients who ran one of the top 10 Cajun restaurants in New Orleans.”
So, drawing on their combined experience working as servers and cooks in family-owned restaurants and their knowledge of Cajun cuisine, Dinh and Nguyen opened the doors of Cajun Crab House seven months later.

Despite the success they have achieved as restaurateurs, however, Dinh says plans are in motion to realize their original goal at another location nearby.

“Less than a year later,” he says, “I already have this second business: the seafood market that I wanted to open in the first place.”

In the meantime, seafood ingredients can still be purchased at the restaurant from the cooler at the left end of the counter, all caught fresh and shipped by Dinh and Nguyen’s company. Those same ingredients go into the menu items at Cajun Crab House.

“Nothing is precooked or preseasoned; we make it all from scratch,” he says.

Dinh stands behind everything they serve at the restaurant, but he somewhat bashfully admits there is one slight difference between the food at Cajun Crab House and what you might find in New Orleans.

“When I do it, it’s too nice,” he carefully explains. “And down in New Orleans, it’s, well, it’s not so nice. People come here, and they think the food doesn’t quite have that Cajun feel because I make it too nice!”

Asked what he prefers, Dinh points to the oysters and shrimp, both fried, but he understands that not everyone likes their seafood prepared the same way he does.

“If you want it plain, steamed with butter, we can do that. Just ask when you order,” he says. “But if you want that Louisiana Cajun flavor, however spicy you want it, just let us know and we’ll make it for you.” Upon request, they will happily make your order so spicy you’ll be coughing after the meal is through. ”