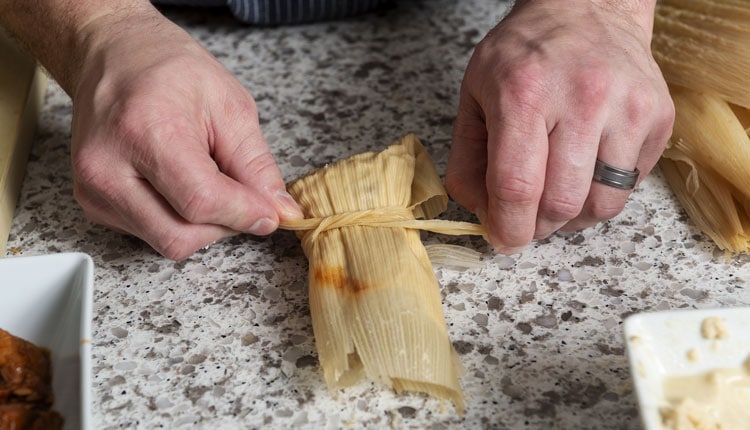 You can't eat just one

You can stuff just about anything into tamales. Cheese, vegetables, braised meat, seafood, chicken, venison, turkey, beans and dessert are all common, but you can come up with so many more with a little imagination. If you talk to anyone who has a tradition of making tamales in their family, they will probably gladly give you some advice on making them. If you are lucky, they might give you a recipe.

Corn husk is king — not the only choice but the predominant one.
Banana leaf, plantain leaf, avocado leaf, wax paper, parchment and foil are some other options. OK, the last few are non-traditional, but the concept is still the same: The wrapper protects the dough, and the dough protects the meat. While tamales are very popular in Mexico, they are regional across Central America. The filling and wrapper change depending on what is available in the region.

Masa harina is a corn flour. The production is a process of cooking, soaking in alkaline solution and washing to remove the hull of the corn. The center of the corn is ground and can either be used as fresh masa dough or dried into masa harina corn flour that is shelf-stable. The dough or the flour can be made into tortillas, dough to make tamales, a savory tart base or sprinkled on a thin chili to help thicken and more.

Traditionally, tamales were filled with venison and turkey because those were indigenous to Central America. Once chickens and pork were brought into Mexico, they became popular fillings. Cheese, egg, seafood, beans, vegetables or not stuffed at all and just used as bread with the meal are also common varieties.

To me, tamales always seem like three parts: the dough, the meat and the sauce. The sauce can be anything from a pico de gallo or sour cream to one of my favorites, salsa verde.

Once the tamales have been wrapped in corn husk, banana leaf or another wrapper, they need to be steamed. They need the direct, low, even heat of steam; being submerged in water would cause them to fall apart, and an oven would cause them to dry out. The wrapper helps protect the dough and hold in the moisture. Depending on the size of the tamales, they should take about 45 minutes to an hour to cook. When the
tamales release easily from the wrapper/husk, they are done.

3 to 4 pounds boneless pork shoulder or beef chuck (another cut of pork or beef may be substituted)
Salt and pepper as needed
1 teaspoon cumin
1 teaspoon Spanish paprika
Oil as needed
1 large onion, halved
4 to 6 garlic cloves, whole
4 to 6 assorted dried chilies, seeds removed (Ancho, Guajillo or California)
5 cups water
6 to 8 ounces queso fresco as needed to stuff tamales
Directions:
Cut pork into 1-inch chunks and season with salt, pepper, cumin and paprika. Brown in sauté pan with oil until brown on all sides. Transfer pork to another saucepan; add onion, garlic, seeded chilies and water to the first sauté pan and bring to a simmer to deglaze (remove crust in the pan from browning pork). Once the water comes to simmer, add liquid, onion, peppers and garlic to pork. Cover and simmer over low heat for about 2 hours until pork is tender.Drain liquid, but save a cup with fat from the top of the liquid to make the dough. Add onion, peppers and garlic to the remaining liquid and purée. Add back into pork and bring back to simmer, seasoning with salt and pepper as needed. Cool slightly before stuffing tamales. Extra meat can be frozen and used later for tamales, enchiladas, tacos or anything else.

2 cups masa harina
1 teaspoon baking powder
1 teaspoon kosher salt
½ cup fat from cooking meat, butter, lard or shortening
1 cup cooking liquid, more water as needed to make the dough
Directions:
Mix masa harina with baking powder and salt. Add in fat and liquid from cooking meat until dough is the consistency of thick pudding. It should be spreadable but not runny. If you are not cooking meat and stuffing with cheese or another stuffing, you can replace the liquid with water.

1 pound tomatillos or green tomatoes
4 garlic cloves
3 serrano chilies
1 medium onion, large diced
1 bunch cilantro, ripped into smaller pieces to purée
1 lime, juiced
1 cup water or more as needed to purée
Salt and pepper to taste
Directions:
Peel husks off tomatillos and rinse. Cut or pull tops off chili peppers and place tomatillos, serrano peppers and garlic cloves into a dry saucepan. Heat saucepan over medium heat until tomatillos, peppers and garlic start to brown. Add in onion, cilantro, lime juice and water. Purée and season to taste with salt and pepper. Chill and reserve to serve with tamales, tacos or other dish.

Soak corn husks for at least 1 hour in hot water or overnight in warm water to help them become pliable. Using the back of a wet spoon, palette knife or wet fingers, spread masa dough onto smooth side of the cornhusk. Place about a tablespoon of meat into the center and top with a small amount of crumbled queso fresco. Fold corn husk over to encase the meat and cheese.

Cheers to the Holidays