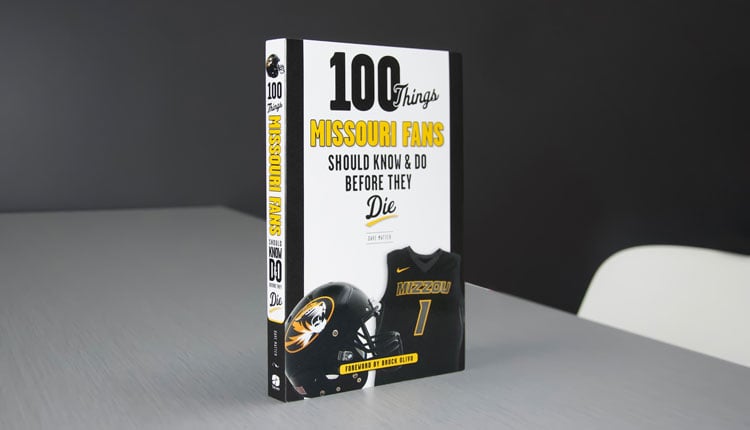 The Ultimate Book for Tigers

Dave Matter's latest book is one for the fans

Former Columbia Daily Tribune sports reporter Dave Matter, who now covers University of Missouri athletics for the St. Louis Post-Dispatch, has given Mizzou fans a new reason to cheer. In “100 Things Missouri Fans Should Know & Do Before They Die,” released in September, Matter puts his expertise as a Mizzou Tigers connoisseur at front and center as he concisely whittles down the history and tradition of the Tigers to 100 essential stories, profiles and insights — no small task.

For the few who might not recognize his name, Matter is a longtime resident of Columbia who grew up in St. Louis and has covered MU athletics for nearly two decades. While attending the Missouri School of Journalism, Matter got his start as a sports reporter working part time for the Tribune. He moved up to full-time status covering Tigers football after he graduated in 2000.

Matter continued covering the Tigers for the next 13 years with the Tribune. In 2013, he began his MU athletics beat with the St. Louis Post-Dispatch and was able to stay in Columbia. It was the ideal situation for his wife, who is from Columbia, and their three sons.

“It’s really home for us,” Matter says. “This is perfect for me; I get to live in Columbia, and I get to write for the paper I grew up reading as a kid and that made me fall in love with sports writing. But I get to do it all here in town. It’s really the best of both worlds.”

Although “100 Things” comes on the heels of Gary Pinkel’s autobiography, “The 100-Yard Journey,” which Matter co-authored last year, it stands apart as a book written for devoted fans of MU football and basketball but also is an excellent source of information for those new to black-and-gold fandom. As a part of a series of sports books published by Triumph Books, the book covers the essential traditions and stories Tigers fans know and love — and some they might want to forget.

Highlights include profiles of Chase Daniel, Jon Sundvold, DeMarre “The Junkyard Dog” Carroll and others. Moments of anguish and infamy such as the Fifth Down and the Flea Kicker are relived. Among those tales are the making of legends and the rich and varied history of University of Missouri athletics.

“If your heart is black and gold, it’s covered with a layer of scar tissue from breaking so many times,” Matter writes in the introduction.

Matter packs the pages with great interviews, amusing anecdotes and loads of statistics. The short essay-like stories are a mishmash of football and basketball knowledge and trivia ranked from 1 to 100.

Matter opens with the most important figures to Mizzou’s history: No. 1 being Don Faurot, of course. After the first 20 chapters, the order is less intentional.

“I kind of have a soft spot for the ’97-’98 era and all the people that were associated with the program then,” Matter says. “That’s also right when I first got into sports writing, so those are my earliest memories of covering Mizzou, my earliest experiences.”
Takeaways from “100 Things” include new interviews from former players on Mizzou legends. Matter does an excellent job of weaving in these little gems that are sure to please and possibly surprise Tigers fans. He invested countless hours in reading, researching and getting fresh, original interviews to include in the book and to give some of the most well-known stories “a bit of fresh paint.”

“Those were the chapters that were probably the most challenging, but also the most rewarding. I had to get that part right,” he says, “for this book to really be good.”
Die-hard Mizzou fans should recognize most of the titles for the short stories and essays compiled in the book. Those who are new to the Tiger family will enjoy the rich history found in “100 Things” and will undoubtedly appreciate Matter’s efforts to not only put them in one place, but to get at the real stories behind the legend and lore of the University of Missouri Tigers.

Cheers to the Holidays