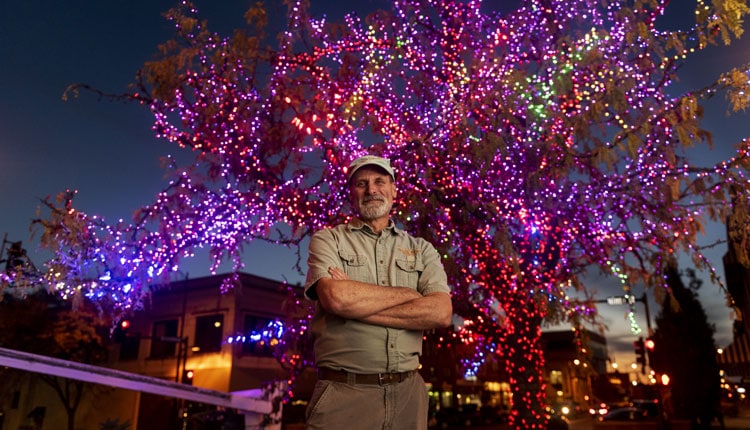 There is something magical about the combination of crisp December air and twinkling lights that makes the holiday season special for many Columbians. That magic is felt when darkness falls over the Village of Cherry Hill shopping center. Thousands of tiny colored lights, wrapped around every branch of a tree, illuminate the grassy block in the center of the square. Their glow brings loved ones together to admire the lights of The Magic Tree each year. Since its debut in 1995, The Magic Tree has ignited a sweeping movement across Columbia, capturing the hearts of the community.

The Birth of an Idea

The man behind The Magic Tree, Randal Fletcher, prefers the name Will Treelighter. Growing up as the son of a lumberjack, he always had an appreciation for trees. As a child, his father would take him hiking and could call out nearly every tree they passed by name. Treelighter carried his admiration for trees into adulthood. One Christmas, a tree with its trunk wrapped in Christmas lights caught his eye. He thought to himself, “It would look really nice if the lights were wrapped around every branch.”

The next year, the Christmas of 1995, The Magic Tree was born.

Because of the tree’s popularity and his over-crowded front yard, Treelighter decided to design and execute The Magic Tree on a larger scale at an alternate location. The move would have to accommodate a larger volume of visitors with additional parking and space to gaze up at the tree. In 2010, Treelighter took his talents and 45,000 LED lights to the Village of Cherry Hill shopping center, where they can be admired today.

“I like being up in the tree and being surrounded by the colored lights,” Treelighter says. “It’s a joyful place to be.”

To Treelighter, The Magic Tree is an artform. He takes the color scheme into deep artistic consideration when laying out the design. To ensure the tiny beams of color don’t blend, he groups several sets of the same color together, so they are vibrant to viewers at a distance.

Treelighter says he limits the number of displayed colors each holiday season because he doesn’t want the tree to look the same year after year.

“I ask myself: What haven’t I done before?” he says.

Considering the tree to be his artistic expression, Treelighter wants to convey a meaningful message to those who come to admire it. He created a beautiful thing but wants it to serve a greater purpose to the community than simply looking pretty.

The purpose of The Magic Tree is threefold, Treelighter says. The first reason: It’s beautiful. On his website, Treelighter writes, “Beauty has a way, when we recognize it, of paradoxically putting us at ease while at the same time exciting us. This paradox is known as the state of joy.”

Treelighter uses the phrase “beauty is in the eye of the beholder” to explain the second purpose of The Magic Tree. He hopes that each visitor, while admiring the lights, will recognize his or her own natural and inner beauty.

Meaning, The Magic Tree is beautiful only because the observer decided it is. Treelighter believes this is a powerful attribute that is often overlooked.

“Beauty is an expression of love,” he says. “You can find it anywhere you choose to look.”

The Magic Tree reflects the inner goodness each person already possesses. Understanding that an individual has the power to call something beautiful or ugly has a significant effect on a person, Treelighter says.

Furthermore, Treelighter created The Magic Tree as a sign that a great being of hope, goodness, healing, peace and love is emerging at this time. The Magic Tree is a beacon for the return of a great presence on Earth to restore balance in humanity for all religions and also for those without religion. Treelighter considers it “a call to goodness, drawing out our own innate desire to be the positive changes we want to see in the world.” The threefold purpose of the tree is tied together by this symbol of unity surrounding each purpose.

“A ton of individually diverse lights come together to form something beautiful — the community,” Treelighter says.

Since its move to The Village of Cherry Hill, the concept of The Magic Tree has swept across Columbia and reached other cities in mid-Missouri, as well. Treelighter began receiving phone calls from people who wanted to hire him to re-create the display at other locations. In addition to the official Magic Tree on Cherry Hill, Treelighter is responsible for displaying lights on trees outside the Unity of Columbia church and Central Bank on Broadway each year. His artwork can also be seen along Interstate 470 in Lee’s Summit and outside the Daughters of the American Revolution headquarters in Boonville. Each tree is a Will Treelighter original and features thousands of lights that shine from dusk until varying hours of the night.

As more of Treelighter’s Magic Trees popped up around town, people began to wonder whether they could create a similar phenomenon in their own front yards.

“I’m gratified that other people see my work and want to do it, too, at the same kind of magnitude,” Treelighter says.

In 2017, The Magic Tree movement captured the attention of the staff at The Crossing, an Evangelical Presbyterian Church in Columbia, which aimed to display something that made Christmas special for the whole community. They viewed the concept of The Magic Tree as an opportunity for Columbians to connect with important people in their lives in a meaningful way during the holiday season. After learning from The Magic Tree master, The Crossing put a crew together and created its own display of lights for the first time last year.

“Our tree has about 200,000 lights on it, which is approximately the number of people living in Boone County,” says Keith Simon, co-lead pastor and executive team member at The Crossing. “Each light represents a person in the community.”

At The Crossing, the staff was surprised by the initial praise and buzz that surrounded the tree’s debut.

“There was this couple who visited our tree last year,” Simon says. “As they were looking at the tree, they turned to me and asked, ‘What is this place?’ ”

Next to the building that is The Crossing church, the couple happened to notice the colorful lights glowing from the street and wandered up. They weren’t initially familiar with the church, but the lights from the tree caught their eye and encouraged them to join the festivities.

“Everyone celebrates Christmas in some way,” Simon says. “Our tree brings people from all walks of life together.”

The tree at The Crossing is lit from 5:30 to 10 p.m. nightly until New Year’s Day. Each Friday night in December, The Crossing tree’s lights will be accompanied by a special event. The events are intended to bring the community, hot cocoa and a photo booth together beneath the twinkling lights.

As the sun sets and loved ones gather at the base of Columbia’s Magic Trees in the glow of the lights, the rest of the world seems to fade. Under The Magic Tree, all that really matters is beauty, joy and the spirit of togetherness.

“I love doing this, and I love that Columbia as a whole seems to love it,” Treelighter says. “I’m pleased to be able to do something that people find enjoyable.”