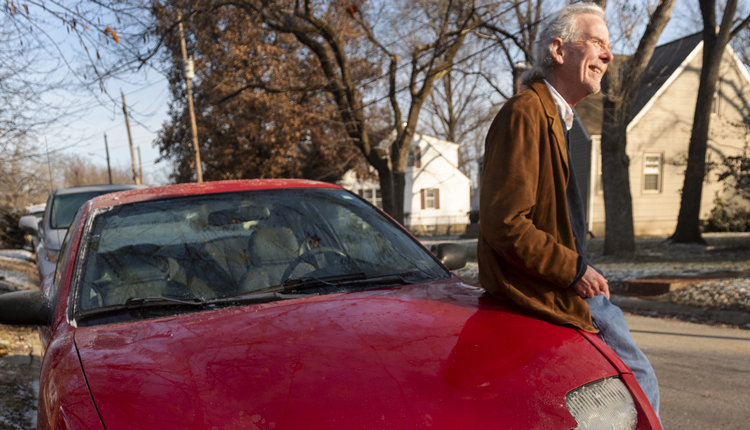 At some point in our lives we become primary caregivers for an aging family member. My most recent patient wasn’t a parent or a pet. It was a Pontiac.

From the tow truck’s shotgun seat, looking through a shoebox-sized side mirror at my car in chains, I had time to reflect on her journey. In the side mirror, she balanced on the flatbed. She bit into the wind like she always does, but her wheels were not turning. She was racking up miles while her gears sat still. Her gurney, this flatbed, was rushing her to a trusted family physician — her mechanic at University Garage — who would excise her alternator like a bad gall bladder and fix her with a new one. For Jack, the tow truck driver, this delivery is just a job. For me it’s another setback in caring for an aging family member.

Some folks would give up on her. They’ve told me so. “Get a new car. New-car smell. And GPS.” But my allegiance runs deep.

Her air conditioner has long since lost its cool. She has no GPS to ensure our course, but her radio still plucks the forecast from the sky. And she trusts me to read the thumb-worn maps in her shotgun seat to guide us past danger. Or into it. She accepts her fate with quiet dignity.

You wouldn’t pick her for World’s Greatest Car. Her headlamps have filmy cataracts. Her doors are dented, and she suffered the insult of a salvage title after her complexion was pocked by a hailstorm. She smells of antifreeze. Her transmission whines. Her brakes squeal. She’s blue-collar in a red dress. But she’s a keeper.

I met her in a car lot 17 years ago. She was sleek and new and lipstick-red, and even though I didn’t realize it at the time, she would set course on a journey no other car has made: She’s driven every mile of every road on Missouri’s highway map, racking up 305,000 miles on her odometer.

Despite today’s setback, she remains strong, reaching an age when 99 percent of her peers have been pounded into refrigerator magnets.

With little planning, Erifnus and I began a string of shortcuts that lasted beyond a dozen years, a journey that left our tire tracks along every inch of state-maintained pavement, every county road from AA to ZZ and thousands of miles of gravel and dirt, trouble and stories. Tracking those roads was like mowing a 64,000-square-mile lawn.

Erifnus and I covered more miles than the combined travels of Marco Polo and Magellan, Columbus and Zebulon Pike, Lewis and Clark, and Dr. Livingstone. The only difference between us and those other explorers is that their amazing feats of bravery changed the world. We just drove around — a lot.

She’s witnessed the toaster-trading frenzy at OcToasterFest and the fruits of mass castration at the Testicle Festival, and a mineral spring with two iron pipes that deliver separate healing waters to Democrats and Republicans. She’s outlived the company that made her, but I wouldn’t trade her for the Mona Lisa.

This car won an Emmy. Oh, I went along for the ride, but the car was the star of the show, a Missouri Conservation series called “Finding Wild Missouri.”

Erifnus doesn’t care. Even as she nurtures a small patch of rust beneath her passenger door, she’s a workhorse, waiting patiently for her mechanic to fix her. He thinks she’ll make it to 500,000 miles. I hope so.

John Drake Robinson is a former director of the Missouri Division of Tourism and has driven every mile of highway in the state. He is the author of “Souls Along the Road.”

The Versatility of Meatloaf