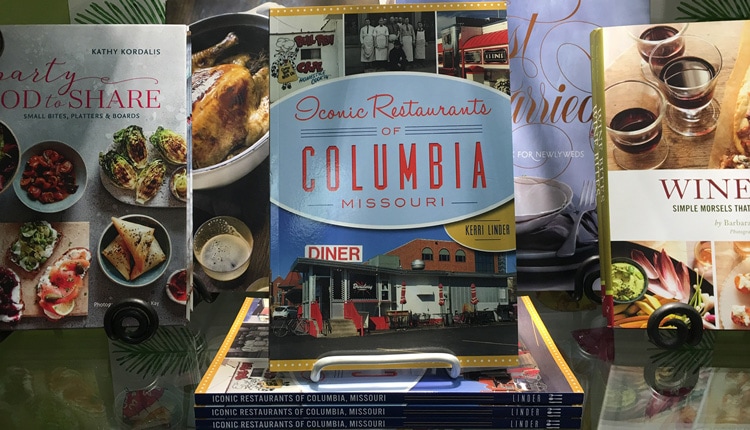 Kerri Linder, author of the recently released Iconic Restaurants of Columbia, Missouri, never would have seen herself becoming an author of a culinary book back when she was working as an accountant for State Farm Insurance. She realized one day that she needed a job that provided flexibility in her schedule to accommodate the busy lifestyle that comes with having four young children.

“I had done a lot of celebration planning,” Linder says. “Of course, there were lots of birthday parties for the kids, and I always gravitated toward those committees at State Farm. I’ve always enjoyed entertaining.”

A self-described “history nerd” about the town where she has lived her whole life, Linder helped found, in 2014, Columbia Culinary Tours, a business where people can enjoy a walking tour through Columbia’s restaurants (maybe four or five in one evening) while being educated on the history of the area they are touring.

“We had done culinary tours traveling to other places, and I thought Columbia would be a good town to have something like that,” she says.

Linder might seem a likely candidate for a book about the history of restaurants and eateries in Columbia, but she is quick to point out that the book was not her idea.

“History Press does different series of historical books about different regions,” Linder says. “They like to use local authors to write about local history, and that’s why they reached out to me. I told them, ‘I’m not a writer.’ ”

History Press thought the writing Linder had posted on the Columbia Culinary Tours website indicated that she was.

Although most of the restaurants mentioned in the book no longer exist, each one mentioned (and many that weren’t, the author emphasizes) left its mark on the city it helped to build and shape. The book tells of a restaurant/hotel where hallways were 14 feet wide to accommodate two ladies with hoop skirts and their male escorts. This same location hosted the likes of Mary Todd Lincoln and Mark Twain.

The book also educates readers about the restaurants located in Sharp End — a historic black part of Columbia back when the city was segregated. Here, readers learn the story of Annie Fisher, a black woman who once served her famous biscuits to President Taft.

Linder discusses various restaurants that hosted the Round Table Group, a collection of prominent Columbians who gathered to observe such rules as “never agree” (this group didn’t take itself too seriously).

Other notable stories include those of the adventuresome brothers who owned the O-Boy Drive-In and their creative means of generating publicity. One example would be the time they attracted customers by hoisting a flagpole in their lot, with a shelter on top, in an attempt to break the Guinness world record for someone staying the longest on top of
a flagpole.

Despite the fact that most of these restaurants have closed, the owners themselves felt the experience was worth it. Mary Evans, one of the owners of the 63 Diner (closed in 2015), says she has “no regrets. I left totally in love with it.”

For several of the restaurant owners, Linder notes, it really wasn’t about making money. They helped give the city its personality and a sense of community. When the longstanding Bull Pen Café closed in 2007, owner Jackie Cockrell wrote a farewell letter in which she talked about how grateful she was to be a part of her customers’ birthday parties, weddings and even funerals. These culinary entrepreneurs created families out of their customers.

“That’s one of the things I wanted to convey the most,” Linder says. “It was the passion that these people had for their restaurants.”