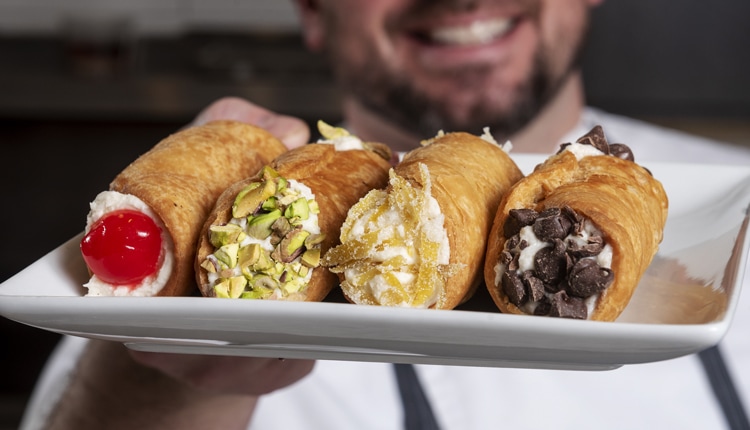 Get crazy with this traditional Sicilian pastry.

Cannoli, “The King of Sicilian Desserts.” If you say the word “cannoli,” there is a 50-50 chance that someone will tell you to “leave the gun, take the cannoli.” Cannoli were adapted from a dish brought to Sicily by the Moors more than 1,000 years ago. The Sicilians adapted it to what we know as cannoli today.

If you have ever played with Play-Doh, you can make this dough. A mixer is nice but not necessary. Most of the time, I mix in the bowl or mixer for just a little bit, then finish kneading by hand. It is very easy to think you need more liquid and add too much if you are using a spoon or mixer. The dough should be smooth but not overly wet. Wrap with plastic wrap and rest in the refrigerator for 30 minutes to an hour (this is a great time to make the filling). Flour a clean surface and roll the dough out to a little thinner than — inch. This should hopefully cut about seven to eight rounds, each being about 3½ inches. Wrap the dough rounds around a cannoli tube; use a little egg white at the very end to help seal the dough as you pinch to the other side. Try not to get any egg white on the tube. This will help remove the tube more easily after frying. Make the extra dough into a ball and cover with a bowl or plastic wrap. Rest on the counter while you roll the cut rounds around the cannoli tubes and fry them. You can hopefully roll the extra dough out again and get about six or seven rounds, then once more and get another two or three.

Cannoli traditionally were fried in lard. If you don’t have any lard, shortening will come in a close second. Peanut or vegetable oil will also work. I like to fry in oil at about 330 to 350 degrees. It is hot enough to blister and puff the dough but does not make the shell too dark. Let the cannoli cool in the tubes for 10 to 15 minutes, then remove. I find that by holding the shell very lightly and tapping the tube on the table vertically, it will help loosen the tube to pull out easily.

I have heard that you can fill cannoli with anything. (Singular is cannolo. Plural is cannoli.) I don’t necessarily agree with that — true cannoli have a ricotta filling, so that is all I am going to talk about. Ricotta from the store will probably be a little too moist to whip; you will need to place into a strainer and drain some of the excess moisture. Powdered sugar, nutmeg and cinnamon are common in addition to ricotta. Coffee, chocolate, peanut butter, strawberries, lemon and mint are a few other common ideas to flavor the ricotta. The common ratio is about 2 cups of ricotta to 1 cup of powdered sugar, but you can make it sweeter or more savory as
you wish.

Here is where you can really get crazy. Once the shell has been filled with ricotta, you can get just about anything to stick to the ends of the cannoli. Nuts, chocolate or candied fruit are the traditional toppings (not mixed together, but individually). You can get a little crazy with fresh fruit, candy or even sweet cereal; just make sure when you go overboard that your Sicilian grandmother does not find out.

In a mixer with dough hook or in a bowl with a spoon, mix all ingredients except the Marsala. Add about an ounce of Marsala at a time until the dough starts to come together. Remove from the mixer or bowl and knead the dough until it forms a solid mass. Add a little more Marsala if needed. Be sure not to get the dough too wet; it should be only slightly sticky. Wrap with plastic wrap and refrigerate for 30 to 60 minutes. While dough is resting, make the filling and organize toppings.

Mix ricotta, powdered sugar, salt, nutmeg and cinnamon in a mixer or in a bowl with a whisk. Whisk until smooth and thick in consistency. Adjust with cream as needed, and sweeten more. Add other seasonings (cocoa, instant coffee, fruit, other spices) if desired.

Place filling into a piping bag or into a Ziploc bag (tip of bag can be cut when ready to fill shells).

Once the shells have cooled and been removed from tubes, filling has been made and put into a bag, and toppings are ready, cut the tip of the bag or use a piping band and fill a shell starting in the center and progressing toward the outside. Overfill the shell by about ¼ inch so the topping can stick to the ricotta. Repeat on other side of the shell. Dip each end of the cannolo into the topping so it will stick to the ricotta. Place on a plate or tray, dust with powdered sugar as desired and serve.

Above, Beyond and Somewhat Ridiculous

Many people would go to the store and buy the ricotta, chocolate chips and whatever else looks nice to shove on the ends. If you want to go above, beyond and somewhat ridiculous, here are a few ways to do so.

It is not very hard. If you save your Inside Columbia issues, check out the March 2017 Cooking with Brook. Here is a quick rundown:

½ gallon whole milk
2 cups cream
1½ teaspoons or 6 grams kosher salt
2 ounces lemon juice
Bring milk, cream and salt to simmer over medium-high heat, stirring occasionally. Reduce heat to medium and add lemon juice. The mixture will start to curdle and separate. Keep at a low simmer until large curdles form. Use a ladle and pour through a strainer with a coffee filter or cheesecloth and allow to slowly drain (keep whey for other uses). Remove from the filter and use as desired. This is a perfect drained amount for the filling above.

The ricotta can be put into a sealed container or bag and kept in the refrigerator for four to five days or in the freezer for several months.

Candied lemon zest is also a popular cannoli flavoring. You might be able to find it in a specialty store, but this will be much cheaper, better and you already have the ingredients if you are making ricotta. Remember, it is much easier to peel or zest the lemon before cutting in half and juicing.

2 lemons
Water as needed
Granulated sugar as needed
Use a peeler to remove the outermost layer of the lemon. If you pull the peeler across very gently, you can get as little pith (white) on the zest as possible. Use a paring knife to remove any small bits of pith that are left.

In a saucepan, cover zest with a few inches of water and bring to a simmer; discard water and repeat. Cover zest with a small amount of water and about the same amount of sugar. Simmer until water and sugar mixture thickens to a syrup and zest has become almost transparent. Turn off heat. Coat a plate, tray or flat container with a thin layer of sugar and remove candied zest one piece at a time with a fork or small tongs from the pan and lay flat on top of sugar. Try not to have the pieces touch to help prevent them from sticking. Once the layer is full, coat the pieces with more sugar and continue. Make sure that they have all been coated with sugar, then place into an airtight container and cover with sugar. When you are ready, cut zest into thin strips for cannoli or other uses.

Candied zest will keep for one to two months in sugar.

Once the shells are completely cool, unfilled shells can be placed in an airtight container and be kept for three to four days. I find that they are not quite as crisp and flaky as the first day they are fried. If I want to fill some cannoli a few days later, I keep them in the airtight container, then fry for about 45 to 60 seconds again about 10 to 15 minutes before filling them. They will cool much more quickly because they are not filled with a metal tube. I find that the texture is even more desirable because the oil can now crisp the inside of the shell as well since the tube has been removed.