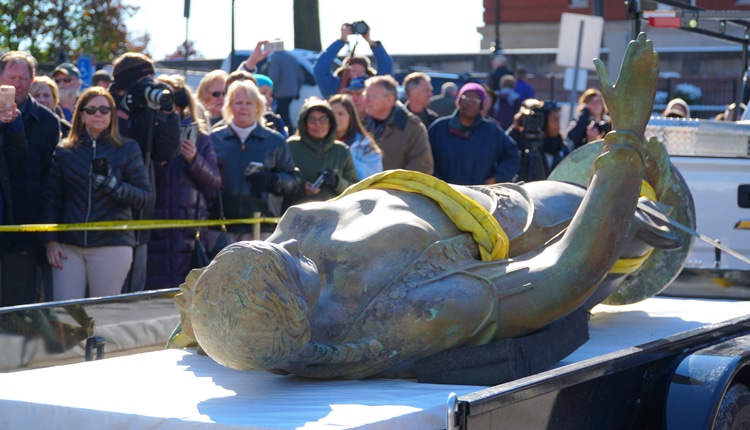 The goddess gets a makeover.

The goddess has left the building. She is the Roman goddess of fertility. Her moods cause the seasons to change. And the common people of Rome identified with her more than any other god.

When the 10-foot-4 statue of Ceres, goddess of agriculture, mounted the Missouri State Capitol dome in 1924, she planned to stay on top of Missouri politics for a long time. But even goddesses need a break to refresh, right? After all, she has endured scores of lightning bolts.
It’s tough being a goddess.

So last fall, after the harvest, a giant crane gently lifted the statue off her pedestal and lowered her back to earth, where she was strapped to a railroad flatbed car and whisked to Chicago for a makeover. Her skin will receive the healing therapy of laser treatments and waxing.

The kids, of course, are Missouri legislators, busy as fourth-graders beneath the Capitol dome. And while the goddess is away, the kids are offering helpful ways to change your world one law at a time.

Some proposed laws are fun, like the bill proclaiming July 7 of each year as “Missouri Sliced Bread Day,” a nod to Chillicothe, the home of the world’s first automatic
bread slicer.

Other bills are more serious, such as the measure that would increase animal abuse penalties from a misdemeanor to a felony in certain conditions involving cruelty to pets or companion animals, cockfighting, bull baiting and sex with an animal. Another proposal would provide immunity from civil liability for people who assist animals trapped in motor vehicles.

Not to be outdone, good Samaritan legislators want to extend liability protection to people who stop to provide emergency medical care to people in need.

Meanwhile, one proposal would relax penalties for speeding through a highway work zone.

One legislator would require public schools to teach students appropriate online behavior. Maybe parents should take this course, too. Another proposal would throw the book at people promoting prostitution via the Internet. On the other hand, some legislators are angling to make sports betting legal in Missouri.

Another legislator wants to require school districts to teach cursive writing. Other bills will once again try to curb texting while driving. lol

Currently, lawsuits for personal injury must be filed within five years from the time the injury occurred. One bill would tighten that time frame to two years from the injury date. Another would give customers 15 years to sue a manufacturer for injury caused by a dangerous or defective product.

Two perennial tourism-enhancing bills are back. One measure would allow adult motorcyclists to ride without a helmet, which would attract riders who currently circumvent Missouri on road trips. And your kid will be able to work an extra week or two at Worlds of Fun if legislators can delay the start of school until no more than 10 days before Labor Day.

Ceres has heard most of these arguments before. She will benefit from her time away. And a few months after the last bill is voted up or down, she’ll return — bronze and beautiful — to her
stormy perch.

Such is the life of a goddess.

John Drake Robinson is a former director of the Missouri Division of Tourism and has driven every mile of highway in the state. He is the author of “Souls Along
the Road.”