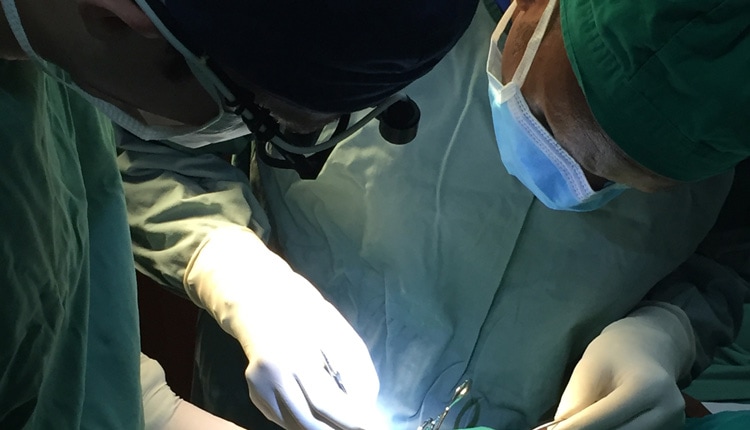 Sitting on the sticky, white paper covering the exam table, about 200 patients are told they need brain surgery each year at University of Missouri Health Care. Whether it is benign or cancerous, brain tumors can be life-altering for the men, women and children who face the prospect of surgery. The surgery can be invasive and painful, resulting in a long recovery time and massive scars. MU Health Care’s Steven Carr, MD, offers a new surgical technique that may assuage the way we feel about brain surgery. The innovative technique could benefit patients cosmetically, functionally and pathologically. Carr is the only neurosurgeon in the area who performs this less-invasive keyhole technique to remove brain tumors for MU Health Care’s patient population.

Carr joined the MU Health Care’s neurosurgery team in July 2018 with several years of experience under his belt. He attended medical school in Chicago at Rosalind Franklin University of Medicine and Science and completed his residency at the University of Colorado Health Sciences Center where he found an interest in minimally invasive cranial surgery.

Upon completing his residency, Carr participated in a fellowship program in Sydney, Australia, where he became specialized in this minimally invasive keyhole brain tumor surgery. Throughout his fellowship at the Prince of Wales Private Hospital, Carr practiced and learned the principles of the charismatic and world-renowned neurosurgeon Charlie Teo. Teo is considered to be a pioneer of minimally invasive keyhole surgical techniques. Using the keyhole method for every brain surgery he does, Teo is known for performing revolutionary surgeries to remove brain tumors that other surgeons have deemed inoperable. Prolonging the lives of many hopeless patients, Teo has an intense passion for caring for his patients that he instills into his trainees. After completing his fellowship in June 2018, Carr carried Teo’s surgical techniques and philosophies of compassion into his new position.

“I wanted to bring this method to Columbia because not everyone can travel around the world to gain access to this kind of training,” Carr says. “As surgeons, we have to continually push things forward for the good of our patients.”

Historically, brain tumor surgeries have required a traditional craniotomy. A craniotomy generally calls for a large portion of the scalp to be shaved so a large incision can be made, removing part of the bone from the skull to expose the brain. Most brain tumors are relatively small; therefore, some surgeons are questioning the necessity of larger exposures to perform a brain tumor removal. Over time, technology has improved and adapted, allowing neurosurgeons to minimize the amount of disruption of normal anatomy. This new technology has resulted in the development of the keyhole surgical technique.

In comparison to traditional techniques, the keyhole method is not that dissimilar to customary brain surgery techniques; it is mostly just strategic modifications to standard accepted approaches “The philosophy is to make the smallest exposure that is to accomplish the same goals of surgery,” Carr says.

The keyhole method allows neurosurgeons to sneak in and out of sections of the brain by strategically removing only the bone that is necessary to access the tumor. Keyhole brain surgery can be done anywhere on the head, depending on the location and size of the tumor.

For example, Carr can perform a minimally invasive “eyebrow” craniotomy to access tumors located near the front of the brain. In this operation, he makes a keyhole-sized incision in the eyebrow that gives him access to the brain. For the removal of skull base tumors or tumors located towards the back of the brain, Carr may perform the keyhole craniotomy through a small incision behind the ear. With a smaller skull opening, the procedure calls for specialized tools that expand the surgeon’s vision of the brain.

“Studies show that using endoscope cameras adds the additional benefit, as opposed to the microscope, of being able to see to the side, whereas the microscope can just see straight ahead,” Carr explains.

Carr compared the procedure to standing in a doorway. If a person is standing far away from an open door, they are limited to only being able to see what is directly visible through the open doorframe. If a person is standing right in the doorway, they are able to see around the corners of the doorframe and into the whole room. Meaning, the keyhole-sized incision only allows the surgeon to be able to see directly through the hole and it’s the specialized tools, a result of advanced technology, that opens up Carr’s vision of the brain. As a result, neurosurgeons are able to remove the tumor causing less disruption to brain tissue than a traditional craniotomy.

Although the recovery time is about the same for traditional brain surgery techniques and the keyhole technique, MU Health Care’s hope for any patient is to have them up and going as soon as possible. The hospital is involved in an Enhanced Recovery After Surgery (ERAS) program, of which these kinds of keyhole techniques seek to supplement specific strategies to manage post-operative pain and get patients back to functioning independently as soon as possible. The keyhole method is considered to help patients return to their normal lives quickly because a smaller incision involves less pain and minimal scarring.

“From a psychological standpoint, patients tend to feel less like they have had brain surgery when using keyhole techniques,” Carr says. “Everyone responds differently to having surgery, but it’s nice when patients are pleasantly surprised and feeling like themselves even in the early recovery period after surgery.”

The procedure doesn’t feel as painful as a traditional craniotomy because there hasn’t been as much dissection of the scalp and other parts of the head. After surgery, most patients can use over-the-counter pain medications to manage their pain rather than opiates. Patients tend to be cleared to leave the hospital in about one to three days after surgery. Cosmetically, the small incision doesn’t result in as noticeable of a scar as traditional brain surgery. The incision is stitched up neatly and doesn’t leave the patient with a large shaved patch on their scalp where their hair used to be. With the keyhole method, there are less wound healing problems overall.

Breakthroughs in medicine have significantly impacted almost every aspect of modern life. People live longer and are given the opportunity to live like never before. As technology progresses, dynamic techniques and innovative tools will continue to empower medical professionals to better serve patients in Columbia and around the world.

“Traditionally things work,” Carr says. “But, we should never be satisfied with the way things are done.”