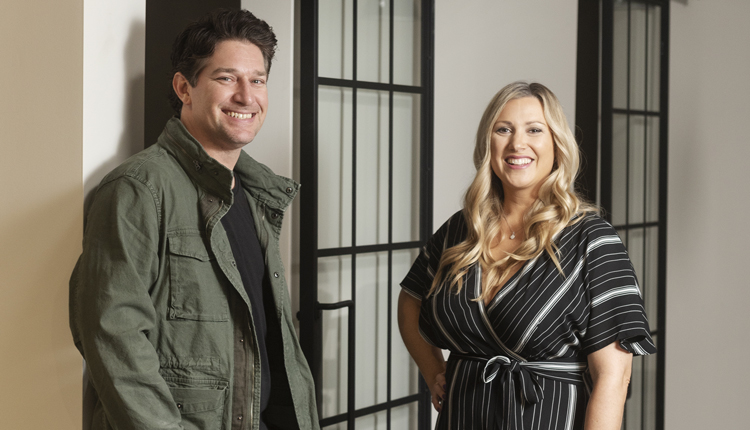 The Power of Two

The CEO and the president of one of the Midwest’s fastest growing ecommerce sites are sitting next to each other on a large couch in their south Columbia home. Business titles don’t fit Sam and Jesse Bodine well. After 13 years of marriage, the birth of two sons, and with a puppy on the horizon, they look more like the typical family next door than the strategic entrepreneurs that they are. At ease with themselves, their surroundings and their company, they are changing the way consumers throughout the United States decorate their home interiors and buy furnishings.

“Our whole philosophy is that we want to make design easy,” Jesse says. “We believe your surroundings affect your well-being, your happiness, your mood. So, no matter what your budget, we want to inspire people to put beautiful things around them.”

They do this through their Columbia-based ecommerce business, Scout & Nimble. Their website, scoutandnimble.com, presents an ever-changing universe of home décor products and ideas. Rather than being organized as a mere catalog, the site also shows how their products can be combined to create different looks. Visitors to the site can choose to shop for specific products, browse through rooms that interior designers from around the U.S. have arranged in an assortment of popular styles, or discover new designers and their latest projects. And almost everything displayed can be bought instantly. Sam explains, “We’re an interior designer-driven ecommerce site that focuses on making design accessible to all.”

Kate Spiro, a Brooklyn-based designer who was recently featured on the Scout & Nimble website, appreciates what the company is doing for designers as well as the public. “Scout & Nimble provides designers with the opportunity to reach a wider audience of potential clients, and they give people a way to transform their home with one click,” she says.

The lure of an ecommerce business is that it looks simple and inexpensive to start. Hire a website designer, connect with a few suppliers, then promote the store on Twitter and Facebook. For Scout & Nimble, their website is just one layer of a multi-layered business. The nuts and bolts of their business operates out of sight, behind the web. Teams that support the business are scattered throughout the U.S. and overseas. In Columbia, the Bodines have about 15 employees who are working out of their new headquarters, a 6,000-square-foot space on Vandiver. Outsourced work includes a product management team in India, an advertising team in Florida, a content writer in Minnesota, web development team in Poland and an email marketing team out of St. Louis. In addition, their team includes a rotation of anywhere from 50 to 100 interior designers who are approved to display rooms on their website.

Managing the company takes Sam and Jesse about 60 hours a week each. Although they spend a lot of time together, they’ve figured out how to divide their work and at home responsibilities efficiently. “I take the design side — focusing on design projects, content, social media marketing and the creative parts of the business,” says Jesse. “I manage the day-to-day operations, such as web development, order fulfillment, customer service, paid search marketing and the businesses finances,” Sam says. “And we both handle supplier management.”

Sam and Jesse had no idea when they were first married that they would ever start and run a major ecommerce business. Jesse worked as a neonatal nurse and Sam started a mortgage company. Jesse’s enjoyment of interior home design led her to start a blog, where she could share her ideas with others. “I’ve always had a passion for design,” says Jesse. “But I never thought I could make a living at it.”

Her blog caught on and her following grew. People started writing her, asking for advice on home design. “I started looking at my blog as a possible business,” she says. She realized, “I can’t be the only designer struggling to build my brand, my business and getting access to top manufacturers for my clients.”

Jesse’s intuition was backed up by Sam’s business background. “We did a lot of market research before jumping in,” he says. “Before putting any money into building a website, we needed to know whether this is going to work.”

In 2014, they launched their website with a soft opening. At first, like all small businesses, they had to cope with the stress of more money going out than coming in. But before long, that changed. Using Instagram, Facebook, Pinterest and email blasts, they kept extending their company’s reach. Today, over 5 million people each month are engaged with Scout & Nimble via the Internet. “We’ve always had lofty goals,” says Sam. “And we keep hitting them. We’ve had 135 percent growth each of the past two to three years. Now if we can hit this next year’s goal, it’ll be a big one for us, allowing us to almost double the number of employees we have.” Their growth will also allow them to have their third co-founder and partner, James Roberts, work with them full time this year.

So far, 2019 is off to a strong start for Scout & Nimble. “We just had one of our best months, January, which is traditionally a slow time of the year for home décor companies,” Jesse says.

Columbia seems like an unlikely place for an ecommerce business to take root. “You think ecommerce, and you think east or west coast,” says Sam. But mid-Missouri had the right people and resources to nurture their business. REDI (Regional Economic Development Inc) was there when the Bodines needed support in the business community as well as office space. Bill Turpin, of the Missouri Innovation Center, was there for them with advice and connections.

The Bodines also consulted Jack Stack, Springfield business guru and author of “The Great Game of Business.” The Bodines have embraced Stack’s open-book business method, which keeps employees informed about the costs and profits of the company. “One of the most rewarding things about this is seeing employees take our goals and enlarging them, making them their own,” says Jesse.

The Bodines have succeeded in taking an amateur blog and using it to bootstrap Scout & Nimble into one of the major players in the home décor space on the internet. One thing about their company is certain: It isn’t done growing. “Every time we hit a goal, we’re setting new ones,” says Jesse.