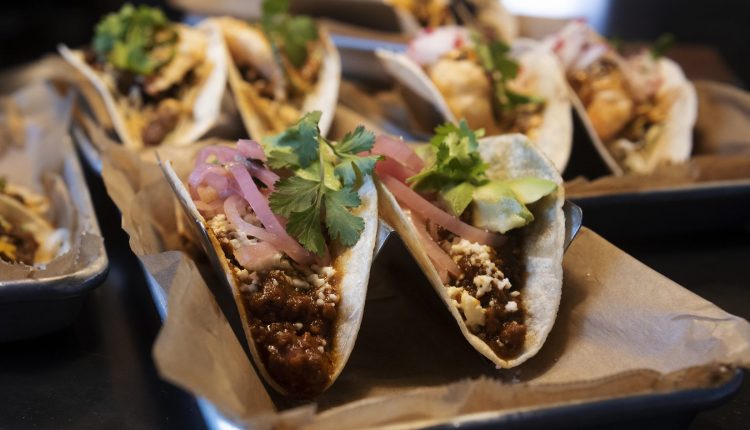 Some nights call for a bit of Latin flavor. While you could pick up a quick bite at a chain restaurant, consider taking advantage of the authentic Mexican and Latin-inspired restaurants Columbia has to offer. And while you can never go wrong with tacos, there is a smorgasbord of dishes from which to choose.

Columbia has a variety of Mexican or Tex-Mex restaurants, but Peruvian influences can be found at Carlito’s. Gourmet fusion dishes are on the menu at 44 Canteen. Authentic Mexican favorites served with margaritas at — you guessed it — Las Margaritas. Here are a few of the fabulous Columbia restaurants that serve up food with lots of Latin flavor. But don’t take our word for it. Go. Eat.

For a little kick, try the Camarones a la Diabla, featuring tiger shrimp in fiery ranchero sauce, or stick with a favorite like Arroz con Pollo. Don’t forget the margaritas available at this Mexican bar and grill. The restaurant’s namesake is for good reason. Flavored margaritas include mango, strawberry, peach, raspberry and its signature lime.

12 A Business Loop 70 E.
Add a little Peruvian to your Latin dining experience at Carlito’s Cabo. The concise menu features simple and genuine Latin food. Carlito’s is known for its authentic street tacos. The most popular is the six-pack, which has six soft tacos topped with pork, steak, onions, cilantro and house-made carnitas sauce. Peruvian specialties include Pollo a la Brasa, a blackened chicken from the city of Lima made popular in the 1950s, which can be specially ordered for events, and Lomo Saltado, a beef stir fry with red onions, tomatoes and Peruvian yellow peppers.

The owners are originally from Peru, and opened the eatery in 2003. When you visit Carlito’s, be sure to visit during the week, as Carlito’s is closed on the weekends. But they make up for it with a convenient drive-thru.

The large selection of fajitas is commendable, with options for steak, vegetarian, chicken, shrimp and other seafood, and combinations of them. Their “specialties” section highlights classic favorites such as Chile Colorado (sliced round steak in a rich tomatillo sauce) but also features unique dishes such as the Chile en Nogada, a poblano pepper filled with pork, fruits, almonds and aromatic spices topped with a walnut cream sauce.

For the daring, La Siesta offers the Three-Pound Mega Burrito overflowing with fajita vegetables, chicken, steak or a mix of all three.

1013 Park Ave.
You don’t have to visit Rose Music Hall just for the music. Pepe’s is worthy of the trip and offers takeout. Pepe’s occupies the kitchen in Rose Music Hall, which was formerly Mojo’s. While not a true dine-in restaurant, it shouldn’t be overlooked. Pepe’s is quick, easy on the wallet and tasty.

Guacamole is included with burritos, nachos and quesadillas — no upcharge for the green good stuff. Gluten-free tortillas are also available. For as simple as the menu is at Pepe’s, there are multiple options for everyone.

You have a small window of opportunity to appreciate Pepe’s, though, usually only on weekends, so be sure to check their hours on Facebook. Stay for the music, or get your food to go. There is no cover charge when ordering takeout, and happy hour at the music hall is free.

1412 Forum Boulevard
La Terraza’s large menu offers brunch choices along with lunch and dinner. Their Mexican dishes include six types of quesadillas and nine enchilada variations. But a trip to La Terraza is not complete until you’ve had the tamales, which are spicy. In fact, most of La Terraza’s dishes are spicier by design than what you would normally expect. Ask the wait staff to customize your order to your heat preference.

Order the Guacamole Live appetizer made tableside for a fun demonstration (and to learn how to make guacamole). But what sets this restaurant apart is the homemade seasonings that have been collected from friends and family from Jalisco, Guadalajara, and continue to be fine-tuned, says owner Maria Hernandez. That’s why some of the menu items might pack a little more heat than dishes at other restaurants.

The chorizo is made by hand, and the pastor pork is flavored with pineapple, red chile and spices. The variety of street snacks include beef tongue street tacos, tortas and flautas, and the selection of salsas, from mild to hot, is another crowd pleaser.

Hernandez and Luis Ramirez, the husband-and-wife team who own La Terraza, met in Texas while working at the same restaurant and applied their decades of experience to La Terraza. This family-friendly local establishment offers a fun atmosphere, large portions, unique seafood plates and more than 30 types of tequila. Like the menu says, “Make Tacos, Not War!

Take off In Style

Pooches & Patios: Places to Bring Your Pets in Columbia

Put Your Own Spin on the Philly Cheesesteak

Enjoy A Homegrown Twist To A Classic Cocktail