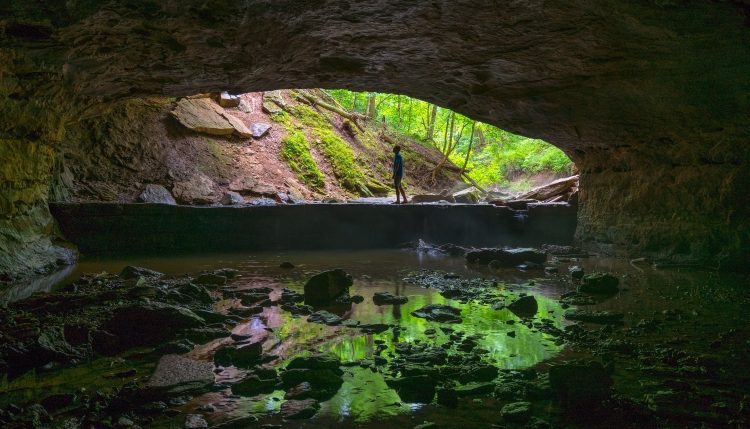 Rock Bridge Memorial State Park has long been a mid-Missouri gem. For Columbia residents, and those who visit the city, the scenic park offers plenty of outdoor fun from hiking and mountain biking to cave exploring and wildflower spotting.

The namesake of the park is a massive, tree-topped limestone rock bridge that was separated from the rest of the cave system when a portion of the cave roof collapsed.

In the 1820s, Nathan Glasgow brought the land that is now Rock Bridge Memorial State Park from the federal government for $1.25 per acre. Over the next century, a series of mills operated at the site, including a gristmill and the first paper mill west of the Mississippi River. The area was also home to two whiskey distilleries which functioned on and off until 1908 — bouncing back from a Union raid in 1863 and a fire in 1889. In the late nineteenth century, the small town of Rock Bridge Mills (now known as Pierpont) boasted a general store and a post office, several homes and a blacksmith. It was a lively place that was often a venue for political rallies, celebrations and family gatherings.

In 1922, Jess and Mary Calkins of Nebraska purchased the rock bridge and 860 adjoining acres. They opened an amusement park on the land. According to a July 23, 1922 announcement in the Columbia Evening Missourian, the amusement park showcased a “merry-go-round, doll racks, popcorn, fairy floss candy machines … and elaborate fireworks in the evening.” There was also an outdoor dance floor.
Rock Bridge Memorial State Park covers 2,273 acres. 229,534 people visited the park in 2018.

The Calkinses gave their daughter Naomi and son-in-law Dennis Ingrum a deed to the rock bridge and 320 acres as a wedding present. As a farmer, Ingrum was dedicated to the land and loved to share it with all who were interested in its wonders. His hospitality made the rock bridge and Devil’s Icebox Cave a regular spot for school field trips and university students on dates. Although the couple turned down big offers from developers, they eventually agreed to sell their land for a state park.

Rock Bridge Memorial State Park is dedicated to Carol Stoerker, the daughter of a University of Missouri professor who was killed in a hit and run car accident in 1961 at age nine. The Stoerkers, their friends and other members of the community raised money to purchase the park as a memorial for Carol. Boone County and the city of Columbia donated $25,000 each, and former University of Missouri president, Frederick Middlebush, gave $10,000 to the cause. Another $3,000 came in from an anonymous donor. In total, the grassroots drive raised over $180,000. With the help of matching government funding, they had enough to purchase the land for $360,000.

Rock Bridge entered the state park system in 1967. On April 10, 1974, at a celebration of the 50th anniversary of the state park system, former Missouri governor Christopher Bond dedicated a stone monument and plaque in “appreciation to the Rock Bridge Memorial Park Association, Inc. and the Columbia community” and “in memory of Carol Stoerker.”

A big celebration with music, food, games, presentations and tours marked the park’s 50th anniversary in 2017.

A Day at Rock Bridge

There is more than enough to see and do during a day trip at Rock Bridge. Picnic sites and two shelters provide comfortable spots to relax or break for lunch. A playground in the day-use area has swings, slides, platforms and more for children. Dogs are welcome throughout the park as long as they remain on a leash. History buffs can check out the Hickam Log Cabin, which the Friends of Rock Bridge restored in 2014 after it was discovered inside a house that was being torn down. The family who built the cabin moved to the area before Missouri became a state. Articles about the founding of the park are available to read at the park office. The diverse vistas can be explored on foot — and when the trail is dry — bicycles, are another great way to get around. Park naturalist Roxie Campbell recommends packing a flashlight, drinking water, snacks, sunscreen, a hat and insect repellent to best enjoy all that Rock Bridge has to offer. 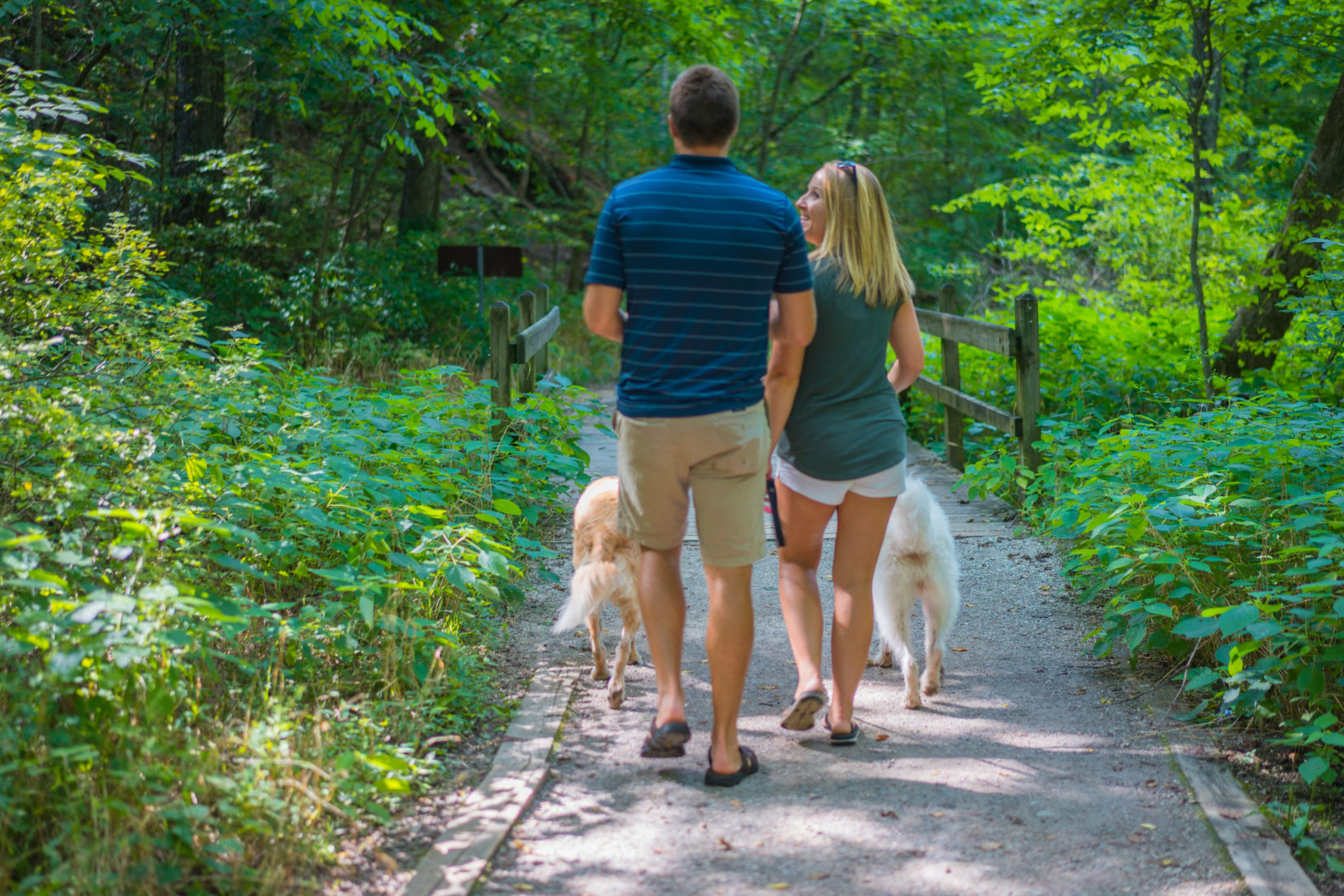 “Rock Bridge is significant for its cave and karst features that are easily accessible,” Campbell says. “There are nearly 25 miles of trails that take you through a variety of habitats from woodland to prairie to streams and sinkholes.” (A karst is an irregular limestone region with sinkholes, underground streams and caverns.)

The namesake of the park is a massive, tree-topped limestone rock bridge which was separated from the rest of the cave system when a portion of the cave roof collapsed. It’s 63-feet high, 125- feet long and about 50-feet across inside. The half-mile Devil’s Icebox Boardwalk travels over the rock bridge to two of the park’s most popular sites: Devil’s Icebox and Connor’s Cave. Interpretive panels are placed along the way to explain the awe-inspiring geological features and cave animal life.

The Devil’s Icebox Cave is a double sinkhole that collapsed to provide an opening into the cave. It gets its intriguing moniker from the underground stream and constant surge of chilling air that flows through it. Unique to Devil’s Icebox Cave is the pink planarian, a small flat-worm that hasn’t been found anywhere else in the world. Spiders, millipedes and springtails also seek refuge there. From April through September, a maternity colony of endangered gray bats uses the cave as a safe place to raise their babies. In addition, big and little brown bats, the tri-colored bats and the endangered Indiana and northern long-eared bats call Devil’s Icebox Cave home.

Since 2010, the cave has been closed to the public to protect the bats from white-nose syndrome, a devastating wildlife disease that has killed millions of bats across North America.Fortunately, visitors can tour the neighboring Connor’s Cave, which is 166-feet long. You can stand up in it and walk through without crawling. Helmets, flashlights and closed toed tennis shoes or hiking boots are recommended to navigate the cave, and visitors should expect to get their feet wet.
There are 12 caves in the park. Devil’s Icebox is the seventh-longest cave in Missouri with 6.5 miles of mapped passages.

“Rock Bridge is one of the significant cave parks in the system,” says Campbell. “ Another highlight of the park is the Gans Creek Wild Area, which spans bottomland forest, limestone bluffs and wooded hills. The 8-mile loop trail is a popular destination for hiking and birding. Horseback riding is permitted when the trail is dry. Native wildflowers and fruits, such as Spring Beauties and wild plums, fill the landscape.

“It’s a fascinating place to be,” Campbell says. “You’re only a few miles from Columbia, but you can look out over a scene that is totally natural. It’s a nice retreat from city life.”

Bat Program, June 29
Get an in-depth look at the unique characteristics and amazing abilities of Missouri’s bats during these family-friendly, interactive events. The highlight is seeing the bats fly out from Devil’s Icebox Cave.

Water Festival, July 13, 9 a.m.-noon
Adults and children can learn about streams and the aquatic animals that live in them through displays and educational activities, such as tours of Connor’s Cave and using nets to catch aquatic animals.

5 Places to Get Your Feet Wet