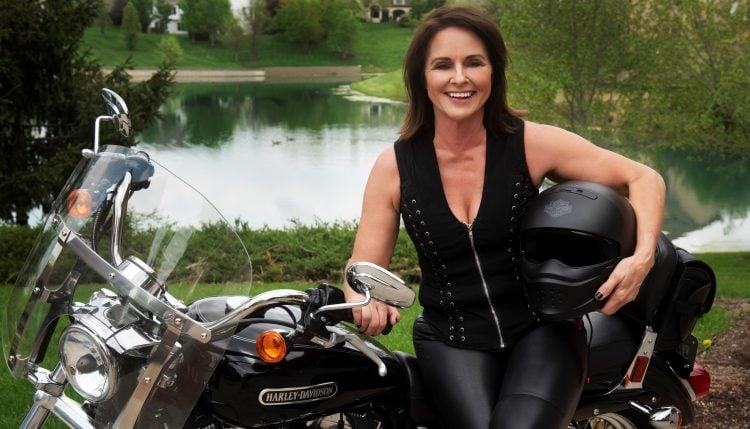 Women Who Thrive on the Ride

Romana Mack is Roaring Ahead

A Harley Davidson Sportster 1200 weighs 591 pounds. Romana Mack does not. Although she is in no way intimidated by her Harley, she takes a cautious, commonsense approach to riding. After all, she’s not one of those people who were born to be wild. It wasn’t until she was approaching the tail end of her 50s that she bought her bike. “My brother had a motorcycle, but I never had any desire to ride it,” she says.

What she had wanted out of life, she was getting. She had been a nurse, a wife, a mother and a grandmother. She was going strong until five years ago when her husband died. Along with the sadness and distress that comes from losing a spouse, she became bogged down in the state’s probate process. After working through her grief and the courts, she realized that she needed to get back in control of her life. “I had been through some struggles after my husband passed away, and I didn’t want my story to be a sad story. I wanted to redirect my life. It just seemed like I needed something to focus on, something that could make me happy again,” she says. 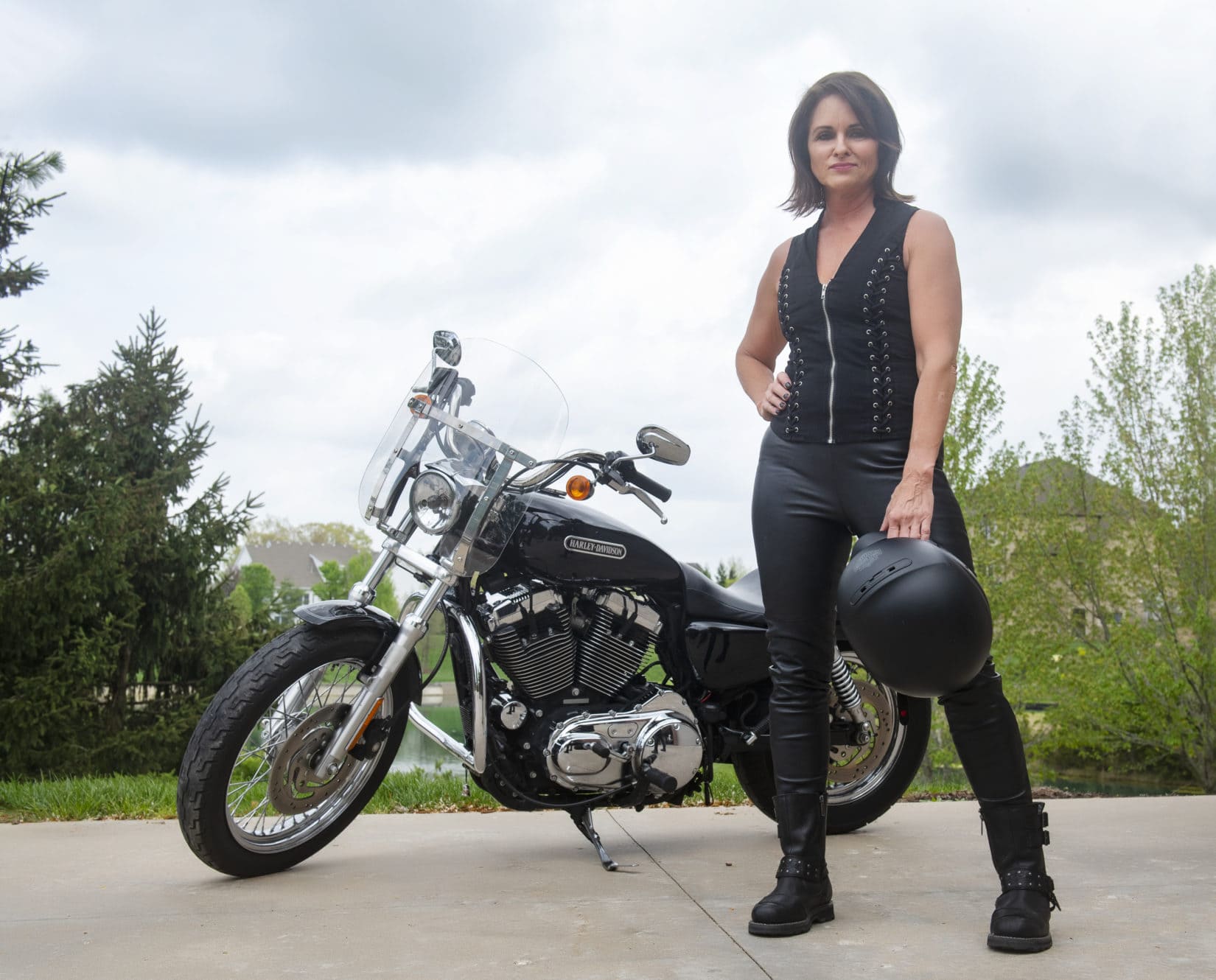 That something turned out to have two wheels, one set of handlebars and a full throttle roar. Mack’s decision to bike her way into a new life was gradual. When she felt it was time to get on with her life, she started dating someone who had also lost a partner. He owned a Harley and occasionally would take her for a ride. “Although I liked to ride, I didn’t like being on the back,” she says.

Coincidentally, a friend worked at the Harley dealership, and Mack started paying attention to the cycles he advertised on Facebook. “One thing led to another,” she says. “I was surprised to see how many women were buying bikes. A lot of them were first-time buyers, and it was kind of empowering to hear their stories.”

Before long she was taking a class that taught her how to ride. When she was sure that she could handle a Harley, she made space in her garage, then filled it with a new Sportster 1200. No longer consigned to the backseat of her boyfriend’s Harley, she now enjoys riding alongside him and a group of friends. She still considers herself a novice and doesn’t feel comfortable on the interstate or riding after dark. But her limitations are no problem for her riding buddies. “They’re really good about letting me be part of the group by taking backroads and getting home before it’s dark,” she says.

Not every woman feels comfortable with the idea of riding a Harley. The stereotype of the tough, tattooed motorcycle mama stands in the way. But the rewards of seeing past this stereotype were well worth the effort for Mack. For her, the biking experience is all about the beauty she finds riding along quiet backroads. It’s about the feeling she gets when she twists her Harley’s throttle all the way open and its engine rumbles and roars. “It’s freedom,” she says. “You feel empowered and self-reliant. It sparks your happiness.”

It makes her feel more alive. “There’s something about death that makes you realize that you need to start living,” she says. On rainy days and on evenings when the weather is too cool to hit the road, Mack finds a way to get in touch with the energy and joy that her Harley inspires in her. “Sometimes I open the garage door and start it up, just to hear it. Boys have fun doing this, so a girl can too,” she says.

Terri Eiffert is a Daytripper

Two songs from two different eras describe Terri Eiffert’s adventures on the back of the blue Harley Road King that she rides on with her husband, Greg. There’s the quaint old song about a bicycle built for two, and there’s Steppenwolf’s rock anthem that calls for bikers to “Get your motor runnin’, head out on the highway.” Terri lives somewhere in between those different styles.

Actually, Terri lives in Columbia, having moved from Tipton when she was a teenager. She met her motorcycle-riding husband Greg while they were students at Hickman High School. After they married, it seemed natural for her to take a seat behind Greg while he drove them around town, throughout mid-Missouri and to the Lake. Now, 35 years later — their three daughters grown and on their own — she and Greg can be seen around town, Greg driving, Terri behind him.

It didn’t take Terri long to figure out that she preferred daytrips to long cross-country touring. “It’s funny,” she says. “I have a two-and-a-half-hour time limit before the seat feels too hard.” She has no regrets about not qualifying as a member of the Iron Butt Association, reserved for bikers who endure 1,000-mile rides. Terri rides for the fun of it and the pleasure of being outdoors. 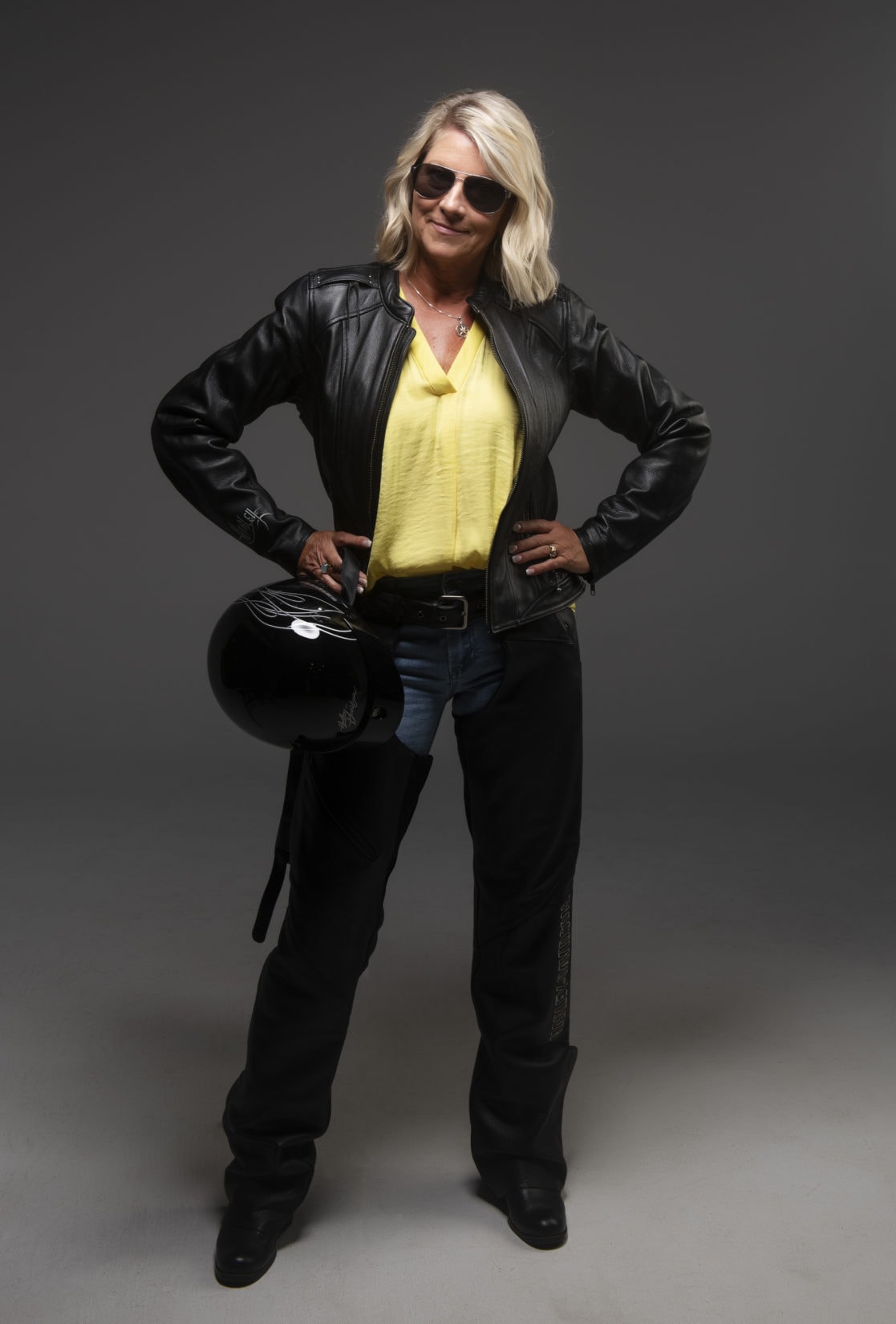 “Riding is different than being in a car because you don’t have any barriers to nature,” she says. “You get to feel the temperature changes. It’s really crazy how you can feel warm pockets and cool ones. You can smell the Jasmine, and when you get up higher, you can smell the evergreens.”

She and Greg like to pull their Harley behind their RV, set up a base, then explore different parts of the country. Terri’s favorite places include the Smoky Mountains, the Black Hills and the Ozark Mountains in Arkansas. Sometimes, when traveling with friends, the men will ride their cycles to their destination where they’ll be met by their wives who have driven together in the comfort of their cars. 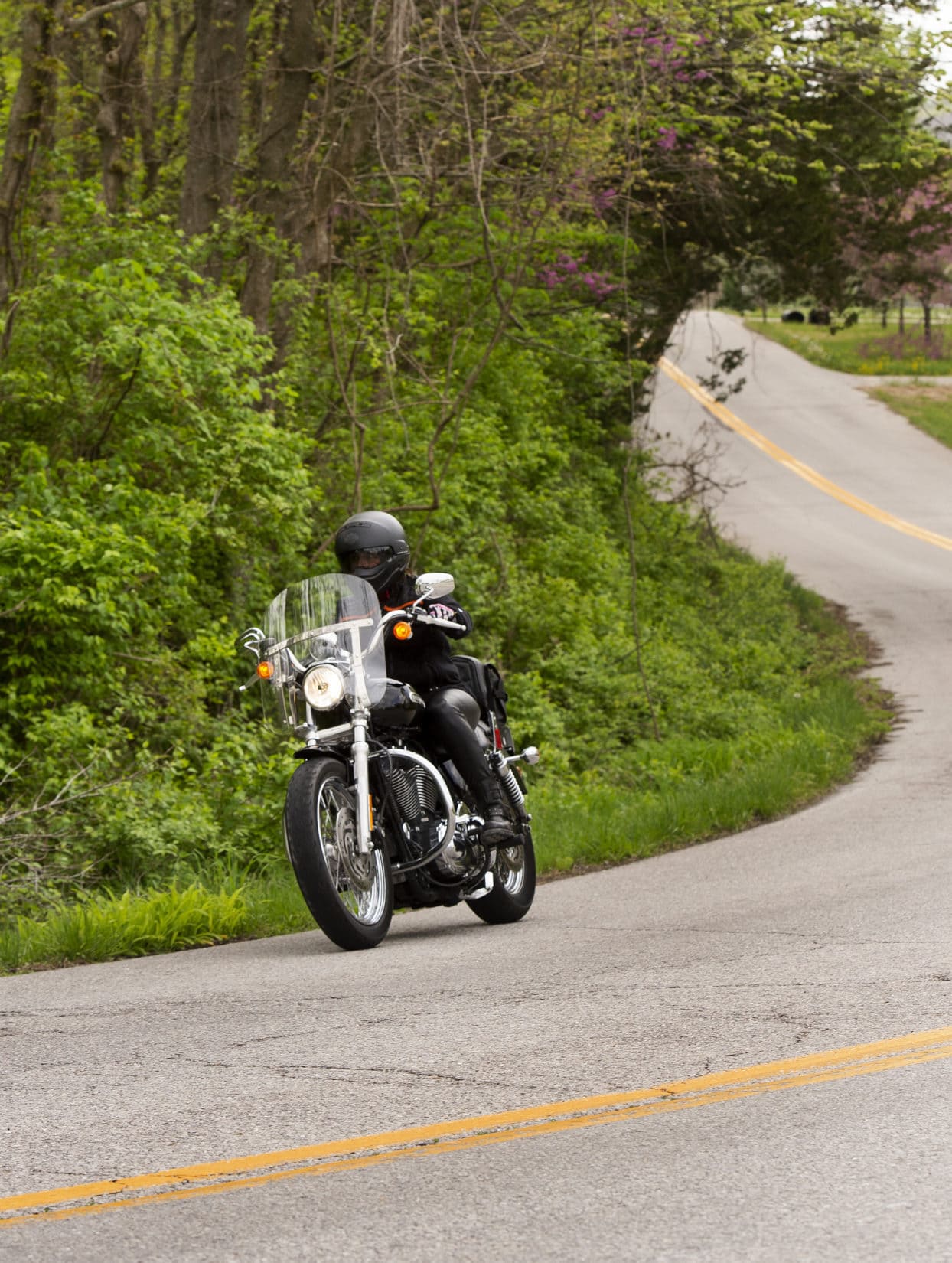 Terri speaks enthusiastically about their trips together. She has a light, high voice that could belong to someone much younger. Her excitement about biking is genuine; her tone, animated. It’s a voice that might sound familiar to mid-Missourians. About three years ago, she took an adult education class on how to be a voice actress. She followed up the one-evening course with sessions with a voice-training coach in New York. She has since gone on to do voiceovers for a variety of companies. Her voice is also familiar to the other board members of the Central Missouri Stop Human Trafficking Coalition.

Despite decades of accident-free biking, Terri makes safety a priority. “You have to be super, super defensive. It’s almost like people don’t see motorcycles,” she says. “I would never get on the back of a cycle with just anyone driving. Greg has been riding since he’s a kid and has really good instincts. He knows how to avoid overreacting,” she says.

One technique that motorcyclists must master is learning how to lean into corner turns. “It’s a bit counterintuitive,” she says. “Although I feel like I’m going to fall, I’ve learned to lean with Greg, to follow his body and hit the curves just right.”

It’s not just on the Harley where she follows Greg’s lead. The couple has taken up ballroom dancing. When they aren’t leaning into curves at 50 miles per hour, they are just as likely to be leaning into each other on the dancefloor.

Setting a Table with Style