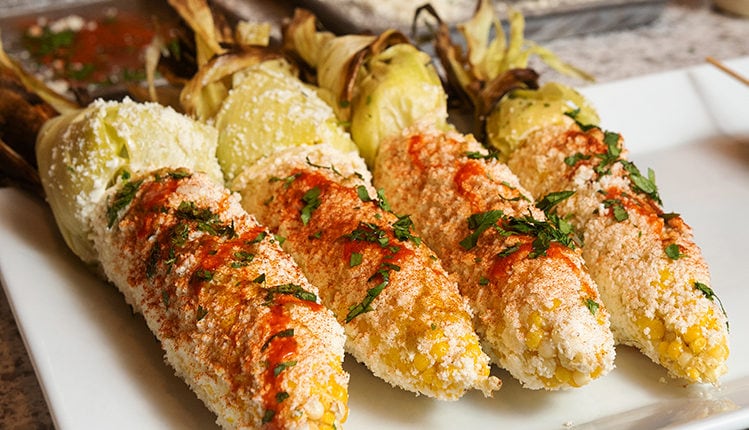 Elotes Mexicanos or Mexican Street Corn may not be on your radar yet. It was not on mine, but once you have had it, there is no turning back to plain boiled corn. It is an unexpected mixture of tangy, cheesy, spicy and sour that makes you wonder, “Why am I just now having this combination for the first time, and when can I have it again?” If you can cook corn and spread butter on it, you are halfway to making Elotes on your own.

Corn
Summertime in mid-Missouri is prime time for excellent corn. How you cook the corn depends on your preference. You can bake, grill, boil or broil the corn. You also have the option of keeping the husk on or off. If grilling bare, grill over medium heat, rotating often, until the corn is spotted with the level of char you desire, and the corn has some give. If grilling with the husk on, soak the corn in warm water for about 10 minutes. Grill over medium heat, rotating often until the outer layer of husk is charred. It is ok if some are charred all the way through the husk. This will steam the corn and also impart some of the charred flavors of the husk. If you would rather not fire up the grill, place the corn on a baking sheet and broil in the oven following the same method as grilling (the heat will just be coming from above). The corn can also be baked for about 20 to 25 minutes, or boiled for about 10 minutes. Once the corn has been cooked, skewer the base of the corn. If you have the husk on, it can be peeled down (the silk will remove easily at this point) and the husk can be wrapped and tied around the skewer. 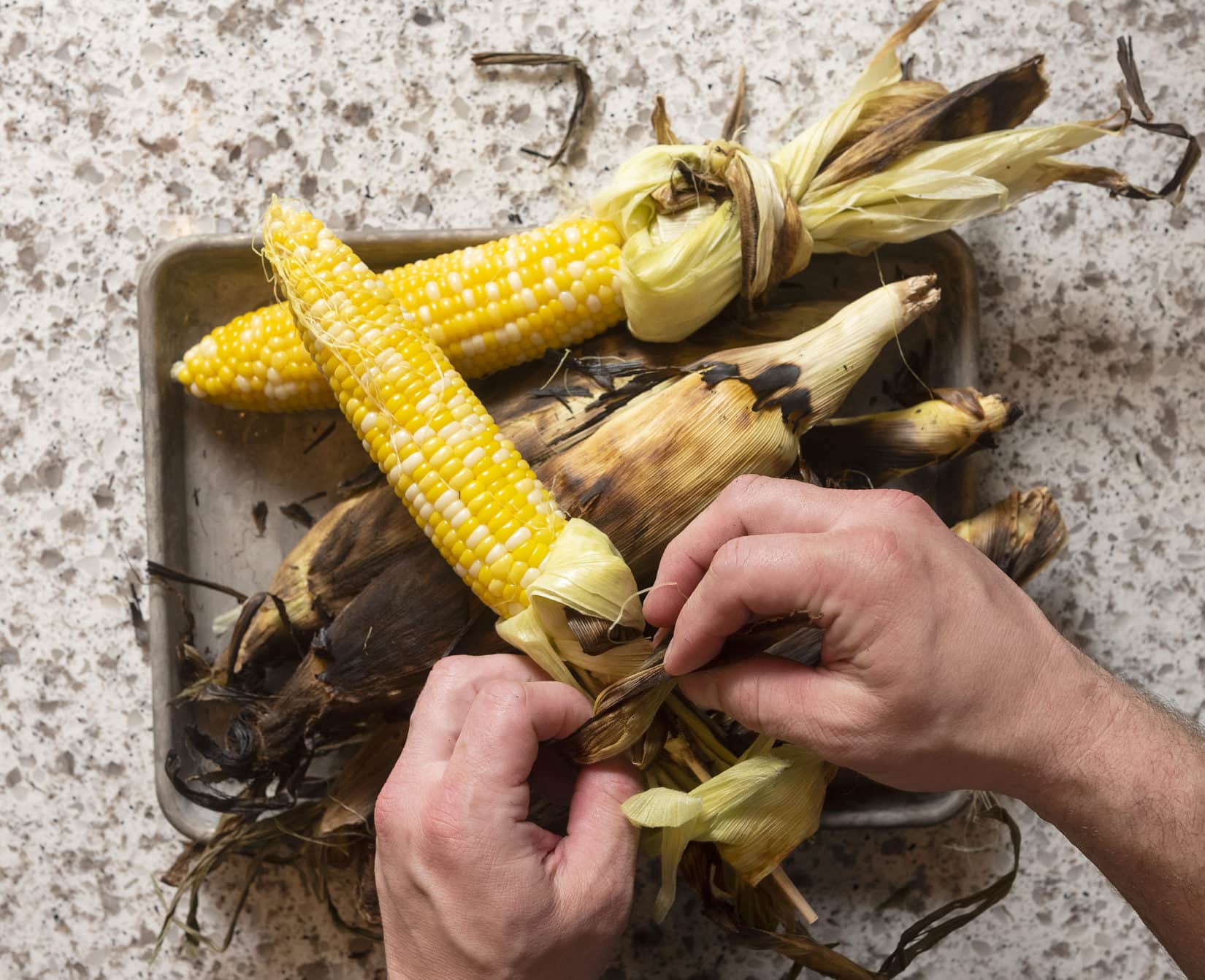 Butter and Mayo
Once the corn is cooked, brush or roll the corn heavily in the melted butter and salt lightly. Brush the corn lightly with mayonnaise — this will help the cheese or other toppings stick. The mayo can be seasoned with lime juice, garlic, cilantro or any other flavors you might want to impart. The mayo will help the cheese stick to the corn as well as give it a tangy flavor. Don’t like mayo? You probably won’t even know it is there. The first time I made it for my wife, I did not tell her that there was any mayo and she had no idea. Some recipes mix the mayo with Crema Mexicana (a Mexican style cream) or add other seasonings — it is up to you to personalize it. 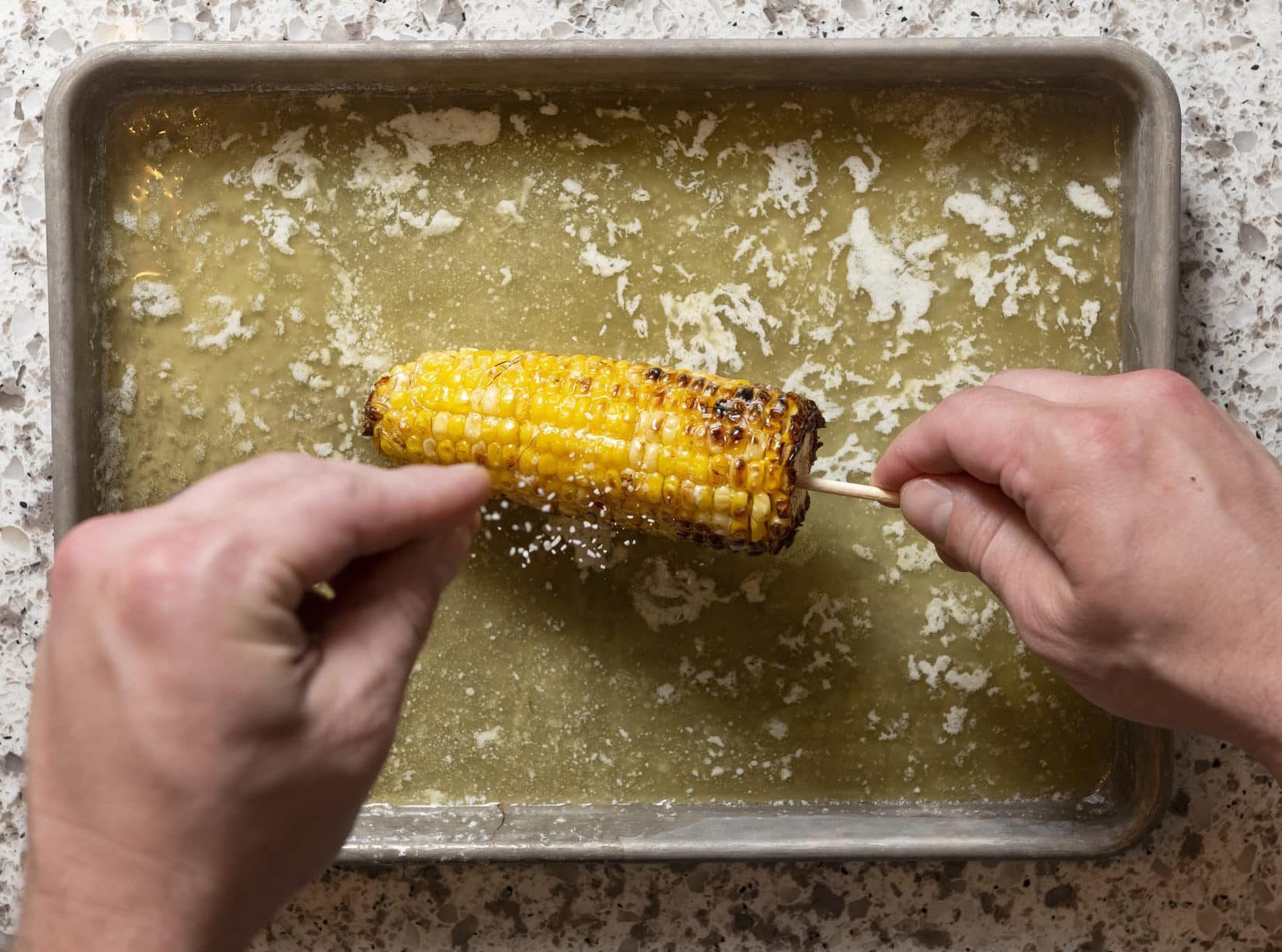 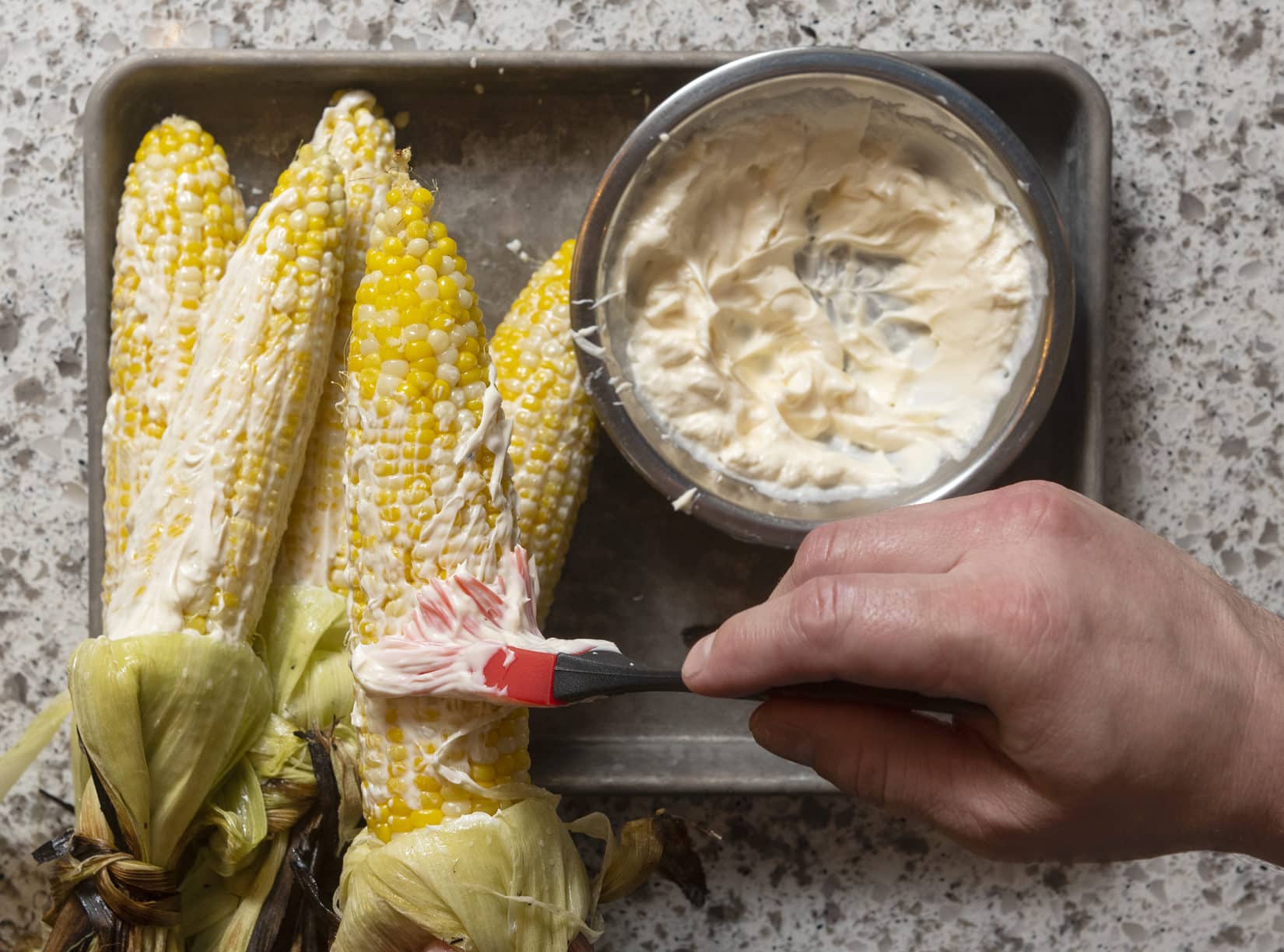 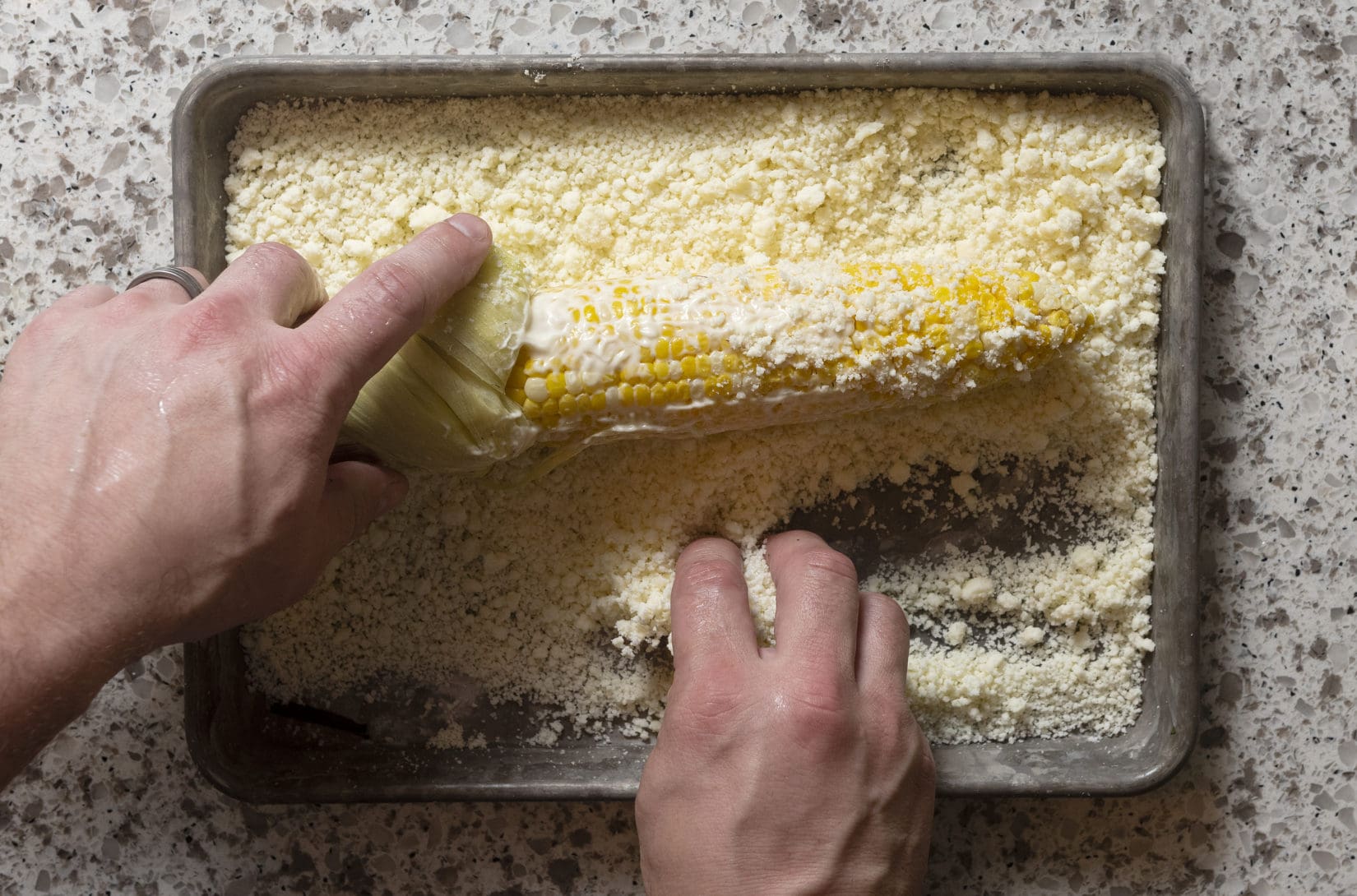 Cheese
Cotija is a Hispanic style cheese named after the town of Cotija de la Paz where it was created in Mexico. It is a hard, crumbly cow’s milk cheese that works great to stick to the mayo on the corn. Some recipes call for Queso Fresco — it will work and is delicious, but is a little harder to stick to the corn because of its high moisture content. Parmesan or Pecorino Romano can be substituted or mixed with the Queso Fresco if you can’t find any Cotija.

Toppings
Traditionally chili powder and lime are the baselines for toppings. This can somewhat be combined with Tajin, a staple Mexican condiment that combines chili, lime and salt. Herbs and hot sauce can also be added. If you want to step way out of bounds, try pulverized chips, Flamin’ Hot Cheetos, or just about anything delicious you can crumble and sprinkle on the corn.

Eating
This corn is not a dainty thing to eat. Maybe not the best thing to eat on a first date or when you don’t have a napkin. It will get all over your face — it’s okay. A fork or knife is not necessary — remember, this is street food. It should be on a stick. Do the best you can and use your fingers to pick up any pieces of deliciousness that fall off. 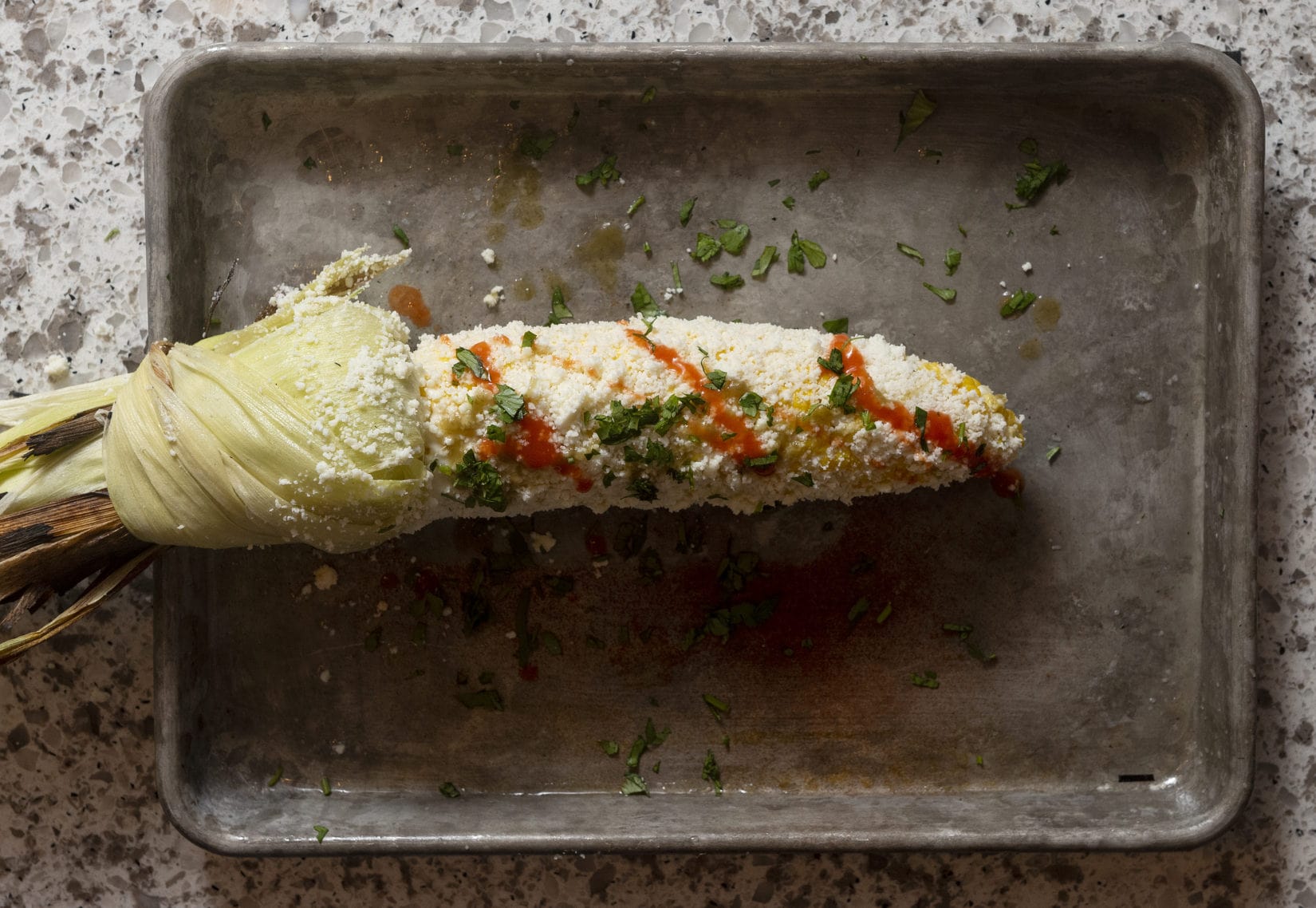 Bake, grill, broil or boil your corn. While warm, brush with butter then mayo and garlic mixture. Sprinkle or roll in Cotija cheese. Sprinkle with chili powder, cilantro, hot sauce or other toppings as desired, serve with a lime wedge or squeeze on just before you serve.

Note -— If you happen to make more corn than your guest can eat, you can put in into the refrigerator until the next day. You can then turn it into a salad by cutting the corn off the cob, tossing with some avocado, extra Cotija cheese, lime juice and cilantro and serving chilled. 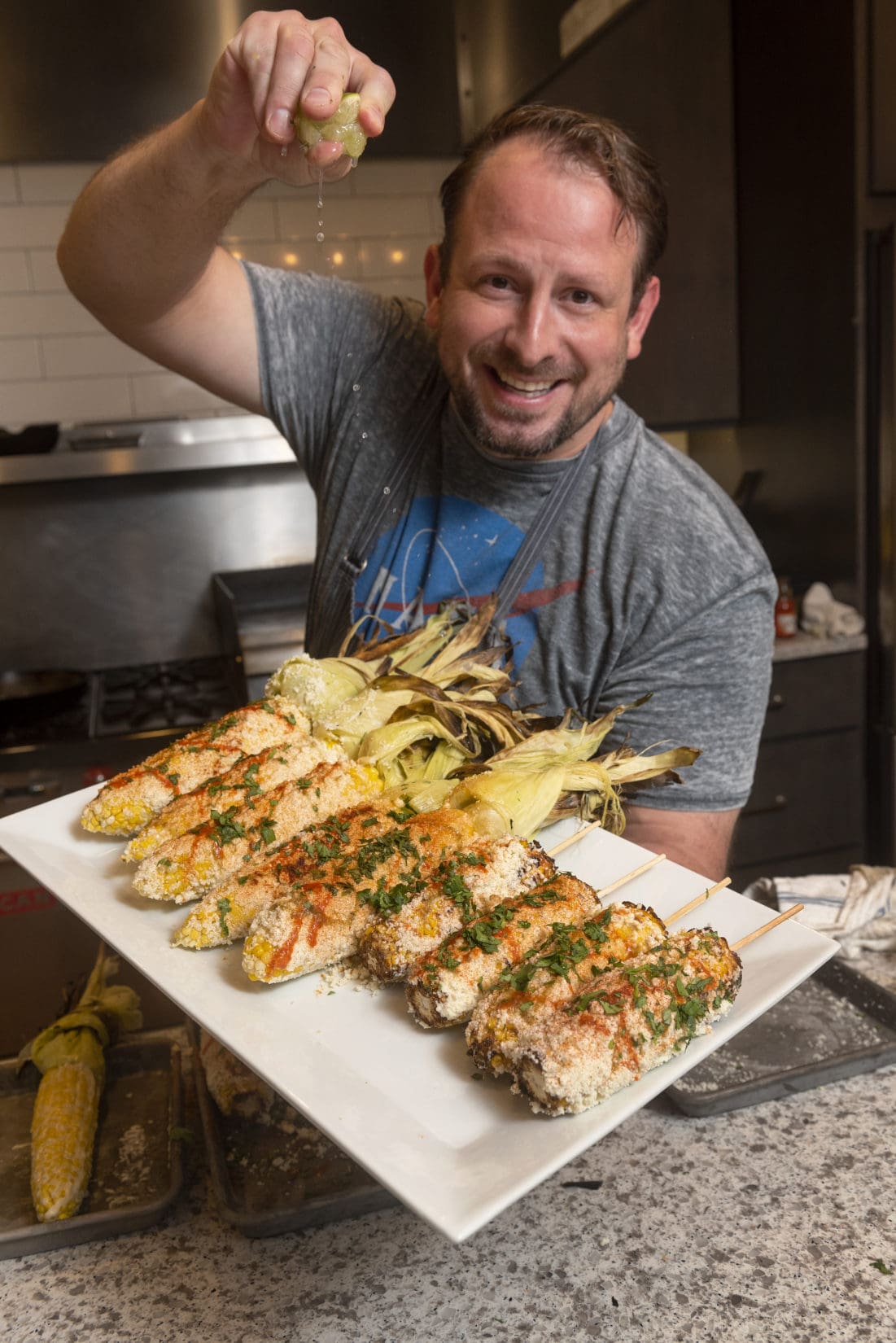