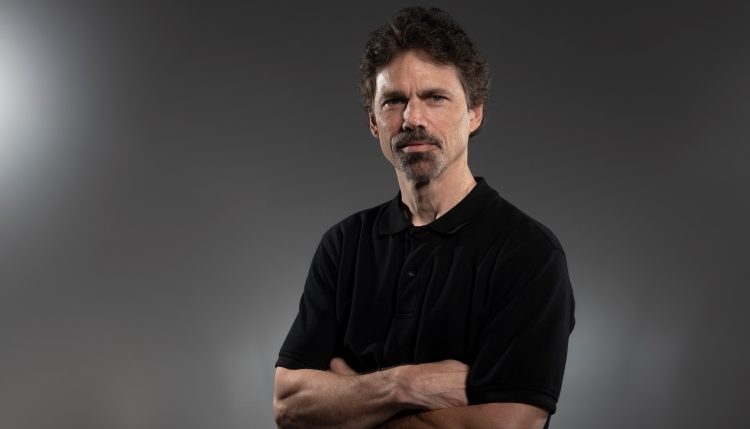 Stephen Paul Sayers became a bestselling author on the dare of a teenager — specifically, the prodding of his own daughter. An associate professor of physical therapy in the School of Health Professions at MU, Sayers didn’t seem a natural candidate for the role of supernatural thriller writer. But something about the look in his daughter’s eye, combined with a lifelong obsession with Stephen King, set off something like a chemical reaction. Sayers split himself into two identities: university researcher by day, fiction writer by night. He’d thought this was merely the result of a deep bond with his daughter; he’d give her the book as a birthday or Christmas gift, or at least as proof that, Hey, look, your old man still has some tricks up his sleeves. There was no reason to expect the story would be published, let alone that it’d become an Amazon bestseller.

But that’s exactly what happened. The story took on a life that Sayers thought worthy of sharing beyond the confines of his home, and soon he nabbed a publisher, Hydra Publications, and a release date: June 2018. On New Year’s Eve, 2018, Sayers was driving home when his publisher reached out to him to ensure he’d check his Amazon rankings that night. Turns out, A Taker of Morrows, the first in The Caretakers series, had cracked the Amazon Top 10 international bestsellers list. This fall, the third book in the series, The Immortal Force, will arrive, wrapping up the story of college professor RG Granville, his wife, Kacey, and the otherworldly powers they wield together.

Sayers insists his books aren’t intended to stir up religious fervor, but they draw upon spiritual questions all the same: Where do we go when we die? What — or who — is vying for our souls? Do we have any say in the matter? In The Caretakers books, RG and Kacey discover that our plane of reality is, in fact, a battleground between good and evil. The good guys, who seek to protect our souls, are the “caretakers.” Bad guys, who hunt our souls as prey, are the “jumpers.” In The Immortal Force, a particularly powerful jumper has uncovered the secret to immortality, and he’s hoping to shuttle it back to his kind, with, of course, the end goal being world domination.

That is, until super-powered RG and Kacey get in the way. This husband-and-wife team is the darkly comedic heart of the series, and the reason that Sayers pitches the book to colleagues as “Stranger Things” meets “The Incredibles.”

“These books deal with how we live and the things that can happen to us, perhaps, if we live a certain way.”

But considering Sayers injects a fair amount of horror influence into his stories, you might want to keep this one away from kids — unless one of them happens to be Sayers’ daughter. She’s an avid reader of her father’s work, and frequently he’ll run ideas by her for consideration before making any final decisions. The two actually write together, sometimes occupying opposite corners of a table or bed and clacking away at keyboards in silence. Or, they’ll go on hour-long walks and suss out ideas. Sayers has already pitched his publisher on one of his daughter’s young-adult drafts, and he’s hopeful she’ll have her first novel out soon.

When Sayers, a Connecticut native, moved to Columbia 16 years ago for a position at MU, he had to look up Missouri on a map to remember where it was. Now, the university — and its surrounding college town — is home. But even after transitioning from New Englander to Midwesterner, Sayers is again redefining his identity. He doesn’t discuss his fiction with students or colleagues, and instead reserves that part of himself for the page. But he’ll admit that finding a passion for writing at a later stage in life has, in fact, reinvigorated his academic work, as well. And the success he’s had, though part luck, is also undoubtedly due to a researcher’s proclivity for big questions.

“These books deal with how we live and the things that can happen to us, perhaps, if we live a certain way,” he says. “There’s more [for people to] consider than just, ‘What’s on TV tonight?’” He wants readers to recognize that RG and Kacey might be bigger-than-life characters in a world far stranger than our own — but what if, maybe, our world is that strange, and we haven’t been looking closely enough? Perhaps we ought to pay more attention to what we fear, and how we act, and how it pushes and pulls the state of our souls. Perhaps we ought to wonder whether or not we’re such good people.

Of course, The Caretakers is also just fabulous entertainment, and there’s nothing wrong with that. If Sayers’ daughter has taught him anything, it’s that entertainment is meaningful — and when our kids push us to get creative, perhaps we should stop and listen.