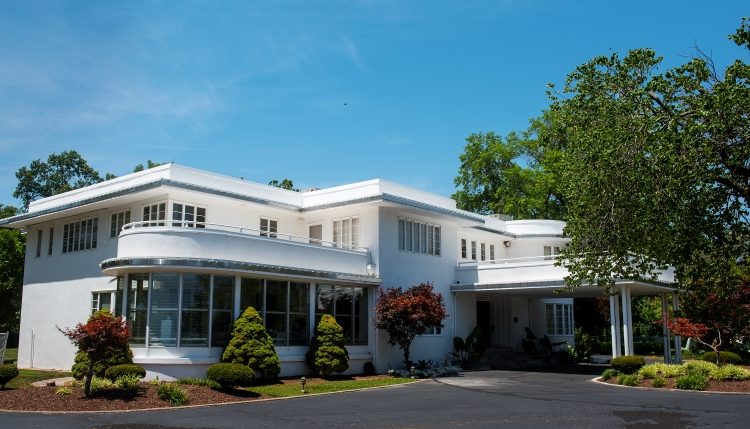 Step Into Style and Back In Time

The Chatol House and Gardens in Centralia Make a Comeback

Like a movie-set built for a 1940s Hollywood film, the Chatol House and Gardens (pronounced Sha-tall) in Centralia preserves the look and feel of another era. Guests passing through its doors find themselves stepping back to a time when movie screens were lit with scenes of glamour and elegance. Unlike the Hollywood fantasies, The Chatol is real and serves today as a chic setting for weddings and special events.

The home’s curved white exterior creates an instant impression of sophistication and style. The two-story building seems to float on the flat green acres that surround it at the corner of Jefferson and Lakeview. Approaching the house along its main drive, visitors arrive under a spacious carriage porch, topped by metal railing. A set of stone steps leads from the porch to two burgundy doors with ship-like round port windows and horizontal metal striping along their bottoms. It is no coincidence that the home’s design accents are reminiscent of a ship.

“In the era when the home was built, people were enamored with ocean liner travel,” says Tam Stone, owner and executive director of the home. “The Queen Mary, the Normandy – these ships were very much in the social consciousness at the time. There’s a lot of ship styling in Chatol.” 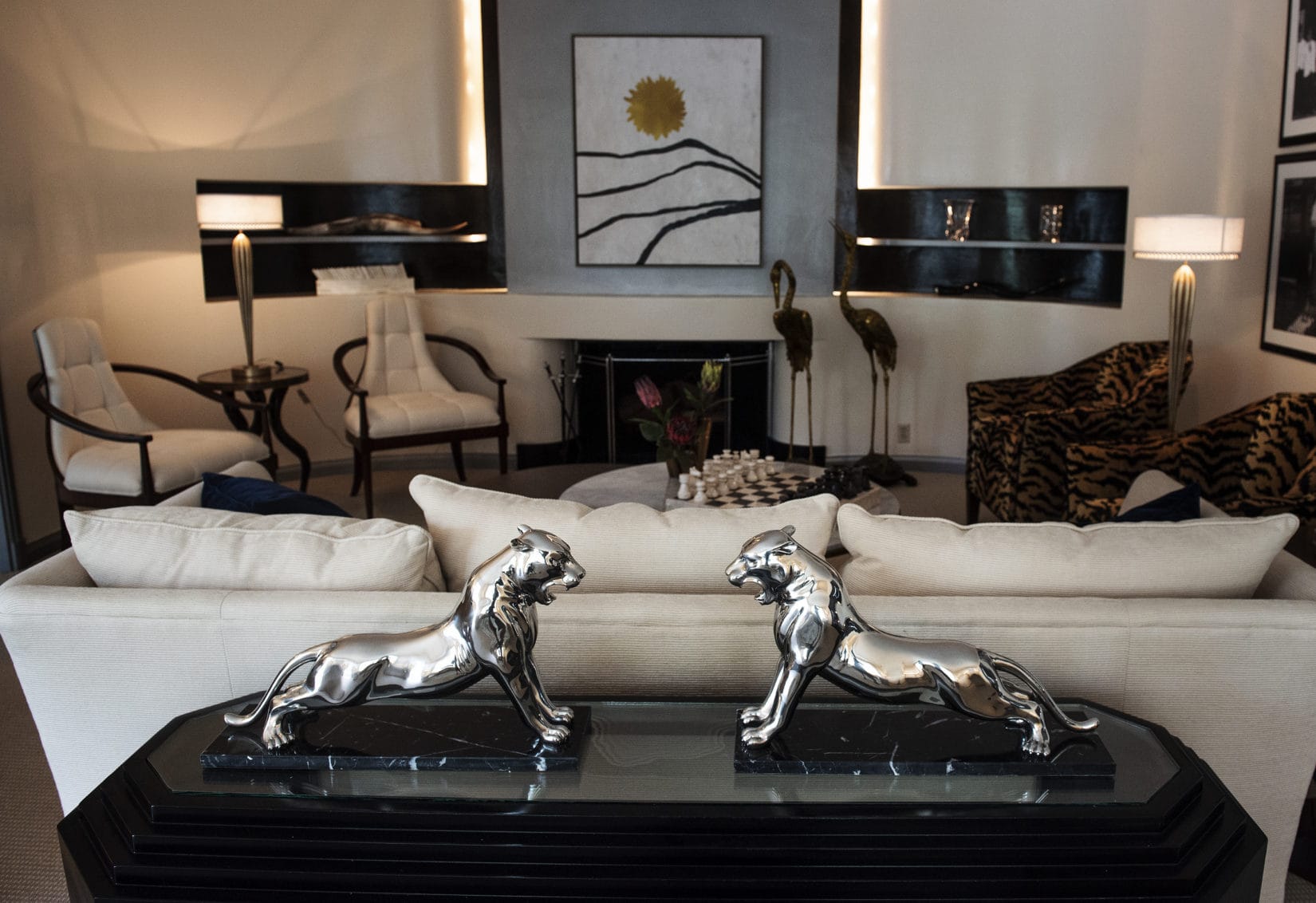 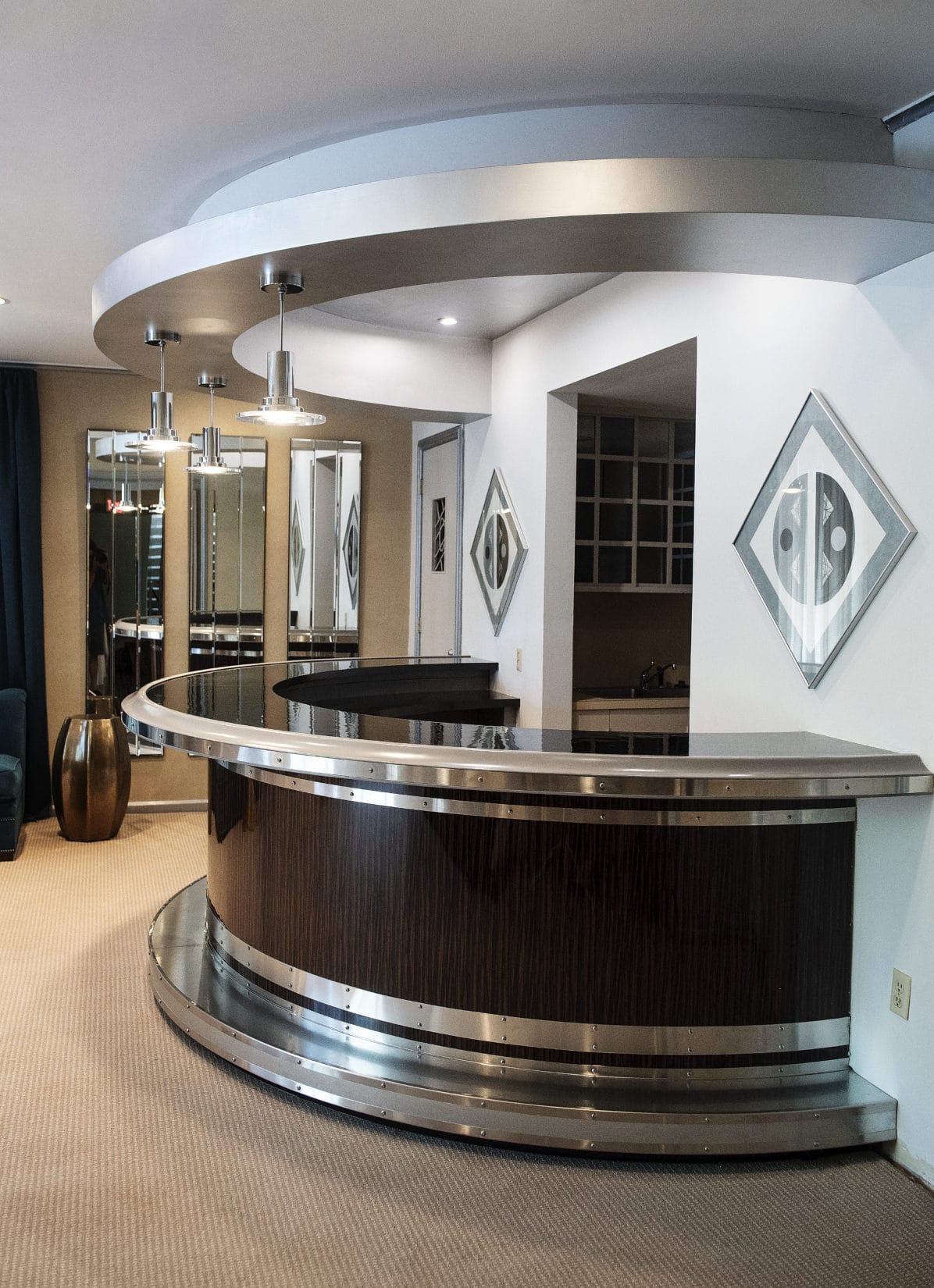 Stone oversaw all elements of the renovation and restoration. She started plans for the event venue in October, began knocking down walls in January, and by June she had opened the doors to Chatol for a sneak preview. She’s used to completing major projects on time and on budget. “My specialty is historic renovation,” she says. “I’m a contractor and do the construction as well, designing from conception through the actual building, all the way through the decorating.”

Elegant, uniquely stylish, an Art Deco beauty – these are dry words for describing The Chatol. As an interior decorator, Stone has a more graphic way of explaining what visitors to The Chatol House and Gardens can expect. “I am going for ‘wow!’” she says. “I’m going for something you’ve never seen before – a crown jewel that people will come to for their most significant celebrations, whether it’s a wedding, a 50th anniversary, a family reunion or an 80th birthday.”

The Chatol has already hosted cocktail receptions for 250, but going forward, “I’ll probably limit group size to 180 inside the home,” says Stone. “We can also open up the back of the house and step down into a tent.”

Developing the wide range of skills required for this type of renovation has taken Stone years of experience in a wide variety of fields, ranging from her years as a college professor to her experiences as a building contractor and historic renovator. In addition, she holds three different college degrees – including a Ph.D. in process design and quality management – plus advance training at Parson’s School of Design. But there’s another ingredient, not as tangible as her diplomas or her more than 20 years as owner of Tam Stone Interiors. Stone has a strong sense of stewardship for The Chatol and its surrounding acreage.

Her husband, Gil, is a descendent of the Chances. His great-grandmother, Sally, was the sister of A.B., namesake of the Chance Company. Since 1940, The Chatol has been in the Chance family, originally as the private home of Gano Chance and his wife, Ann, who raised their two sons there. In the ‘70s, the Chances moved out and the home became a guest house for visitors conducting business with the A.B. Chance Co. The flag of a visiting businessperson’s country was flown beneath the American flag during the visitor’s stay. When Gil and Tam purchased the house in 2006, they found a closet filled with the flags of 40 different nations.

Founded more than 100 years ago, the A.B. Chance Company started manufacturing early telephone equipment, then moved on to products such as land anchors for power lines. Throughout most of Centralia’s history, A.B. Chance has been the town’s main employer. In the ‘70s, the Chances sold the company to Emerson Electric, which in turn sold it to Hubble Power Systems.

The Chatol is a bona fide national treasure, having been listed in the National Historic Registry of Places in 1979. Now that it has been restored, it has become a living museum of past architectural style and furnishings. “Actually, the house is International Modern, which is a type of Art Deco. Specifically, it’s American Deco,” Stone says. 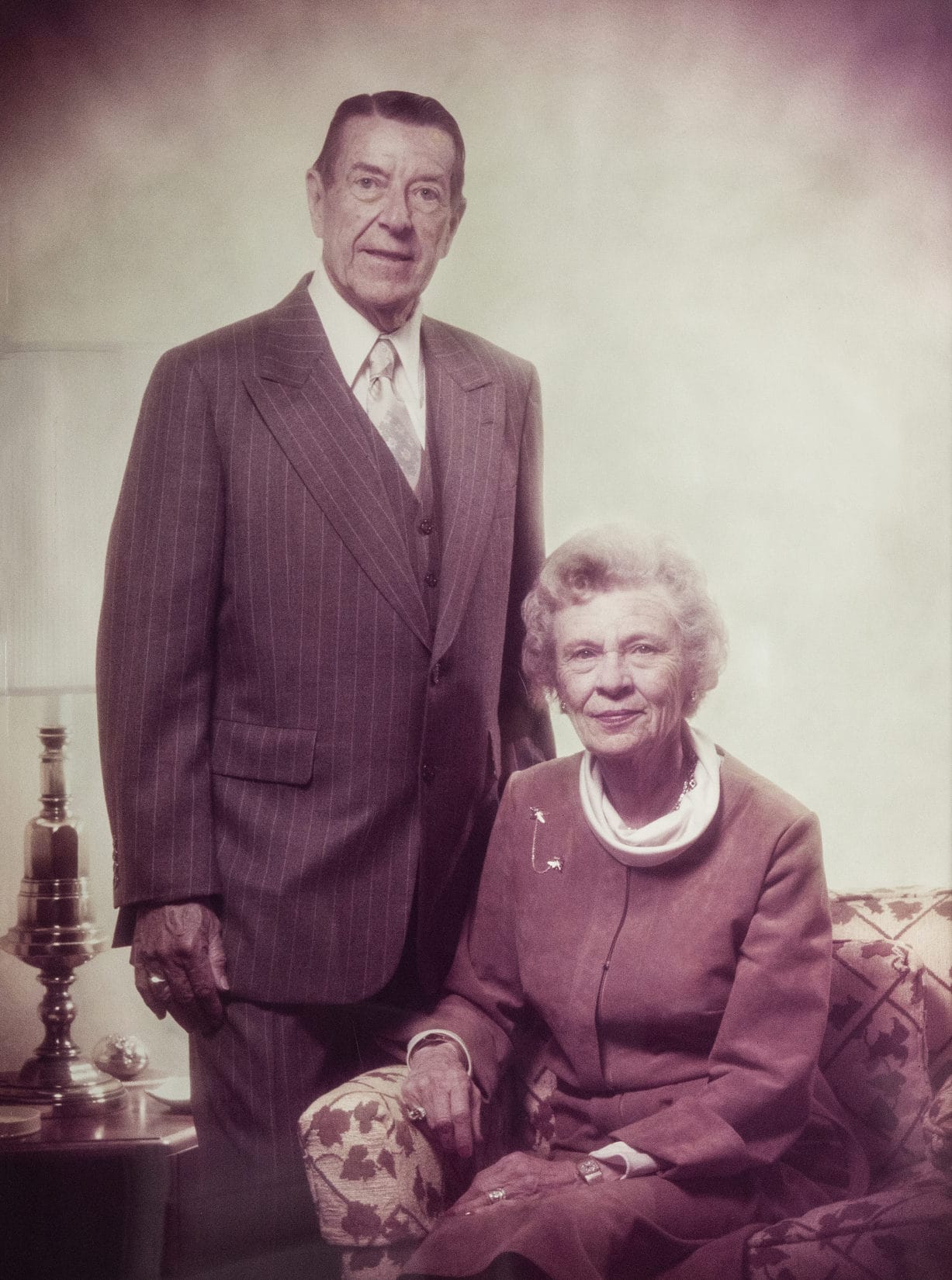 This style is less ornate than European Art Deco. It is recognizable by its clean lines, porthole windows, stairstep motifs and geometric patterns, such as the horizontal lines that are modeled after those typical of ocean cruisers. When designing or purchasing additional furnishings for the house, Stone integrated those features, repeating them subtly, carrying the design throughout the house. 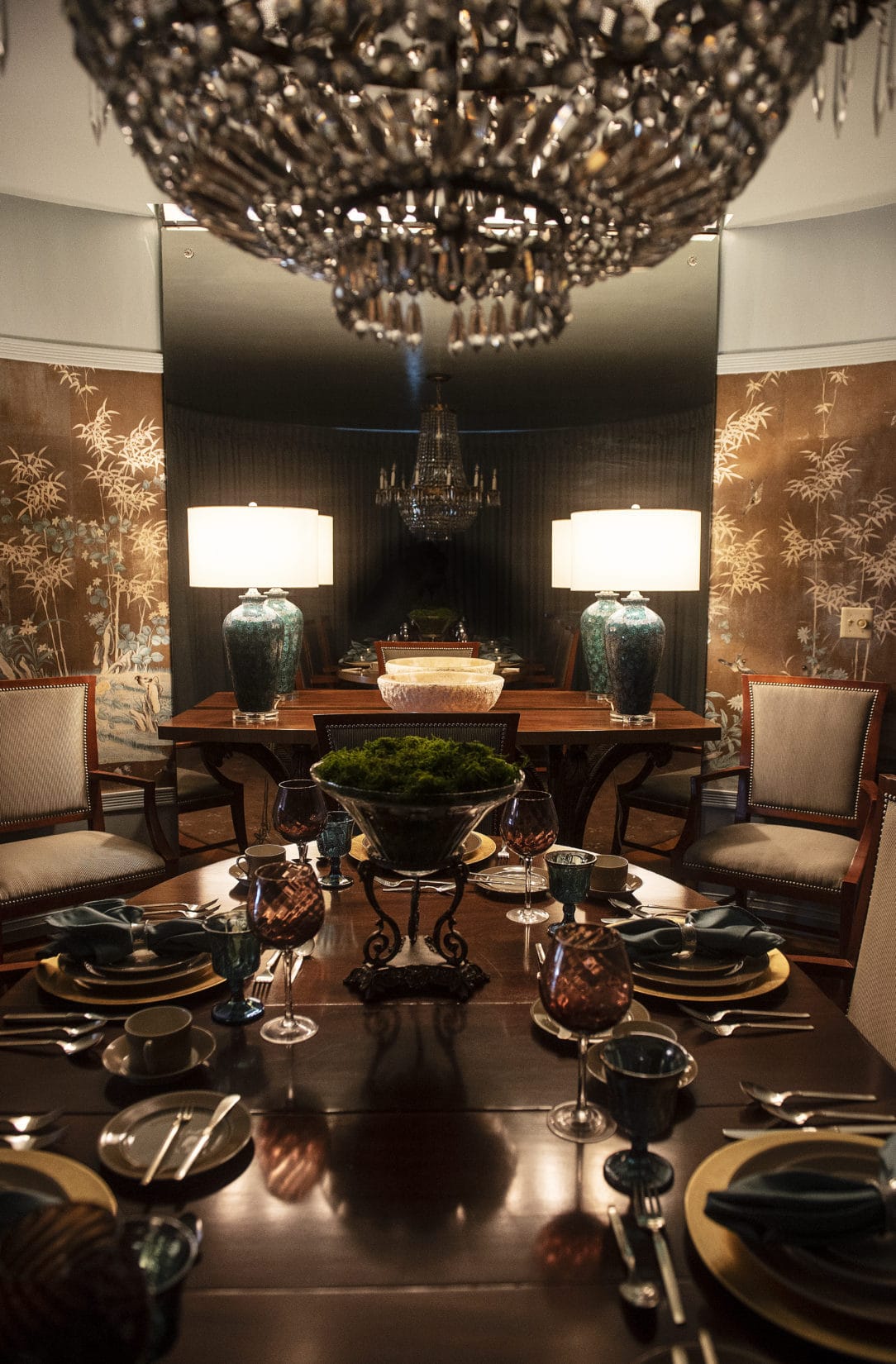 The 10,000-square-foot house includes a ballroom (previously a meeting room and originally an outdoor swimming pool); a library, now a setting for displaying the home’s history; several dining areas; a serving kitchen; a living room and bar; guest bedrooms and a bridal suite that fills the entire front half of the second floor. For this part of the house, Stone created a world of soft pinks and plush furnishings to surround the bride and her bridesmaids. “I wanted the bridesmaids to be the focal point in a beautiful room. I didn’t want it to be a plain white envelope,” she says.

Although the bridal suite creates a tranquil environment that supports quiet conversations and last-minute preparations, the bar, located on the floor beneath it, supports an entirely different mood and experience. The bar echoes the style of the observation deck bar of the Queen Mary. It features a semicircular counter, topped with exotic wood veneers and anchored with a base accented by horizontal steel banding. A photo of the Queen Mary, embarking on its final voyage from Southampton, England, hangs on the wall opposite the serving area. Not only is the room stylish, but it conveys a sense of fun and nostalgia.

Many of the furnishings throughout the house are from the ‘40s and belonged to the Chances. The dining room table was purchased at the 1933 World’s Fair in Chicago, when the Chances visited the “Homes of Tomorrow” exhibit. Some of the furnishings were designed by Stone, who had them custom built; others are reproductions.

“Keep in mind,” Stone says, “the original furniture was appropriate for a family home. We’ve bridged the furniture that was in the home when we purchased it with other pieces that are either from the period or new pieces that are reproductions.”

Stone, who is something of a perfectionist, paid close attention to all aspects of the renovation. The Shoji screen wallpaper in the dining room had been purchased by the Chances in Japan. A hand-painted screen, it is a main feature of the dining room. Matching the painted areas of the room to the exact hue of the wallpaper meant that Stone tried 15 samples of blue paint before she was satisfied that the match was perfect.

Stone isn’t content to have restored the home to its glory. She also wants to restore it to the community. In addition to hosting weddings and other celebrations, Stone is looking forward to making the home an integral part of the Centralia community. “We want it to be a community resource, something that the people who live here are proud of and use. We’ll have more community-based events, such as date night dinners that allow the community to feel like they are part of experience,” she says. 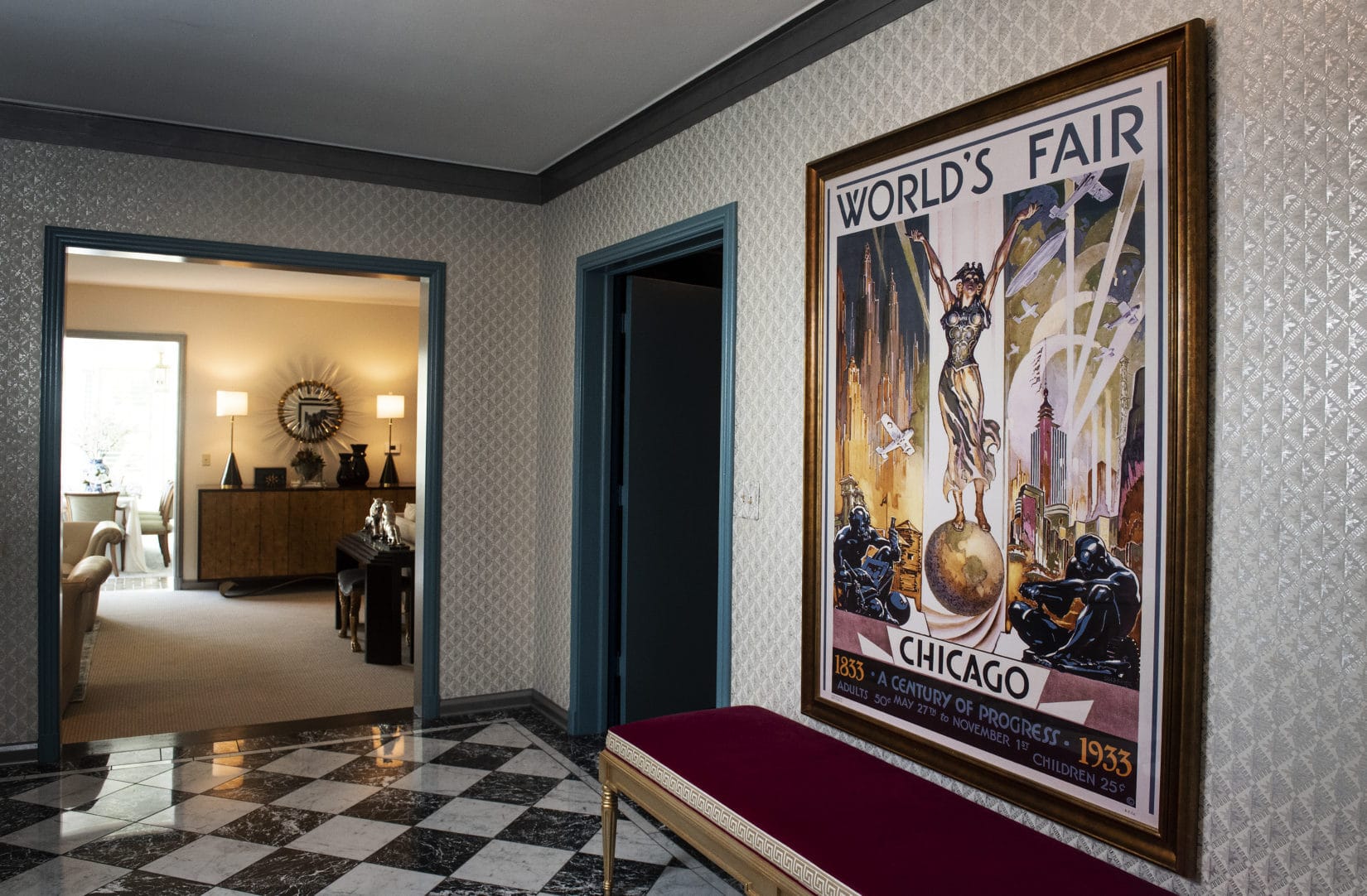