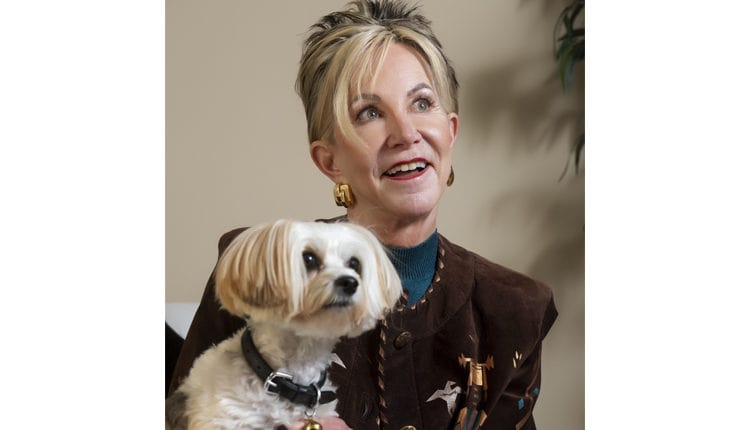 Dr. Jahnae H. Barnett has been president of William Woods University since 1990. “My entire career has been dedicated to higher education, beginning when I started teaching at Northwest Mississippi Junior College at the ripe old age of 20!” she says. Four years later she and her husband Eddie moved to Missouri where he was working for the governor and she joined the Missouri Department of Planning (now DESE). Two years later, in 1973, she joined the faculty at William Woods and has been there ever since — 47 years and counting!

Although Barnett may be a big dog at her university, it’s a small dog who has her heart at home: Diego, a 5-year-old Morkie. “The Morkie is a mixed breed dog,” she says. “A cross between the Maltese and the Yorkshire Terrier breeds. Small, energetic and super silly, these pups inherited some of the best qualities from both their parents.”

She acquired Diego from Mike Wills, director of residential life and campus safety at William Woods. He had sent her a photo of the little pup when he first got him for his children. When she saw the picture Barnett said, “If for any reason this does not work out, I want that little dog! Cutest thing ever!” As her luck would have it, Mike’s children needed a much larger dog for playing tag, ball and general roughhousing so he called her. “I said YES, and the rest is history,” she laughs. The match almost seemed preordained — she and Diego share the same birthday.

Barnett says Diego is the perfect companion and has more American Airline miles than most people. In describing him she says he’s “fiercely protective, always one step behind me, loves all people, and has a special bond with my 19-year-old Ragdoll cat, Sake.”