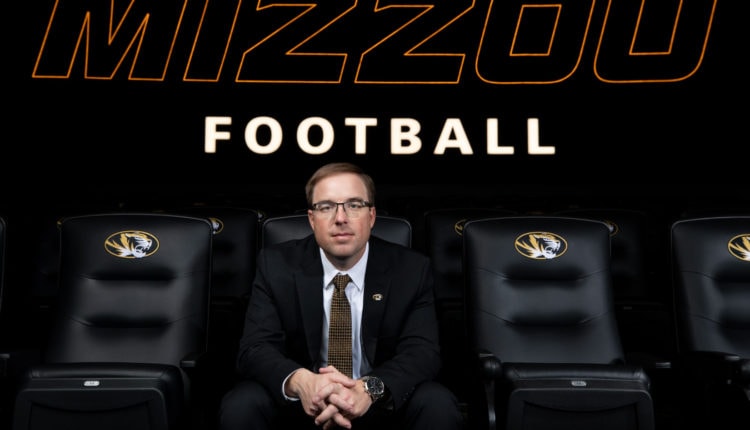 For one pregnant pause, Eliah Drinkwitz gathered himself at the podium. This wasn’t unfamiliar territory; after all, he’d given a speech a lot like this just 359 days earlier, to a room filled with dignitaries and pundits and dreamers like these. Perhaps the significance of the moment struck him — officially named the University of Missouri’s 33rd head football coach earlier that morning, officially a Southeastern Conference head coach at age 36, officially granted life-altering money for himself and his family, officially afforded a chance to achieve all he could dream of in his line of work. Drinkwitz might have just lost his place in the notes, but in the world of head coaching, all of the minutiae are analyzed, even here. In less time than it takes to wonder about all this after the fact, the words arrived. “… but I can’t do it alone. I am not the magic. We are the magic.”

Finding the magic for Mizzou Football had eluded many bench bosses for many years until Gary Pinkel’s renaissance era, and the hope for Athletic Director Jim Sterk is that Drinkwitz is the one to find it. Sterk moved on from former coach (and MU alum) Barry Odom despite three straight seasons of six wins or more — results that would have been hailed as the salad days in the deep, dark 1980’s. The SEC has a way of heightening the stakes, though, and Sterk’s decision to land Drinkwitz as Odom’s replacement has plenty of upside.

Missouri’s new hire went 12-1 in his first-ever head coaching campaign this past season, at Appalachian State. Drinkwitz’s Mountaineers were the first Sun Belt Conference team to post that many victories in a season, and the first in the league’s history to defeat two “Power Five” teams (North Carolina and South Carolina) along the way. The coach could have chosen to stay in Boone, N.C., but described Mizzou as too good to pass up.

“I owe [App State] … an unpayable debt of gratitude for all that they did for me and my family, and I would be remiss not to thank them and that place, but this opportunity was an opportunity of a lifetime and it wasn’t just another job,” Drinkwitz said during his introductory remarks. “It was an opportunity of a lifetime. And I preach all the time that if an opportunity presents itself, you have to be bold enough to take it. And at that point I felt like, all right, this is the right one for me with the right people, with the right support. And I firmly believe that we can do great things together.”

To grasp how fleeting these opportunities can be — and why college football sees more and more movement among its leadership — consider this example from 2019’s post-season coaching carousel: You can plausibly draw a line from Ole Miss’ Eliah Moore mimicking a dog’s bathroom habits on the field (this actually happened) to the firing of the Rebels’ head coach, Matt Luke. From there, you can plausibly draw another line from Mississippi State learning of Luke’s replacement — offensive wunderkind Lane Kiffin — to the Bulldogs firing their own Joe Moorhead and hiring Mike Leach to replace him. It’s also a trickle-down economy … for every coach newly sainted, there’s another newly splattered. So, when your iron’s hot, it’s time to strike.

Once you understand that level of strangeness, other curiosities of such a closely-knit profession make a lot more sense. It’s the backdrop for the words Barry Odom wrote for Drinkwitz’s bio at Appalachian State’s website when the Mountaineers hired him in 2018. “I’ve gotten to know Eliah over the past few years,” Odom said, “and am so impressed by his vision, work ethic and ability to relate to all. His abilities show through in the ways his team plays. He sees the big picture and will put his kids in a position to be successful in every area of their lives.” Of course, Odom couldn’t have guessed he’d be writing that glowing review for his replacement.

By all accounts, the brass at Missouri sees Drinkwitz the same way Odom once did. Sterk introduced his new hire by saying, “He’s got that magnetic personality that makes his players, his coaches and everyone he meets want to give him their very best.” University of Missouri Chancellor Alexander Cartwright raved about their first conversation — ranging from classroom philosophies to the Masai Tribe — and added “We love having someone who really is not just a coach, but a scholar” at the helm of the football program. 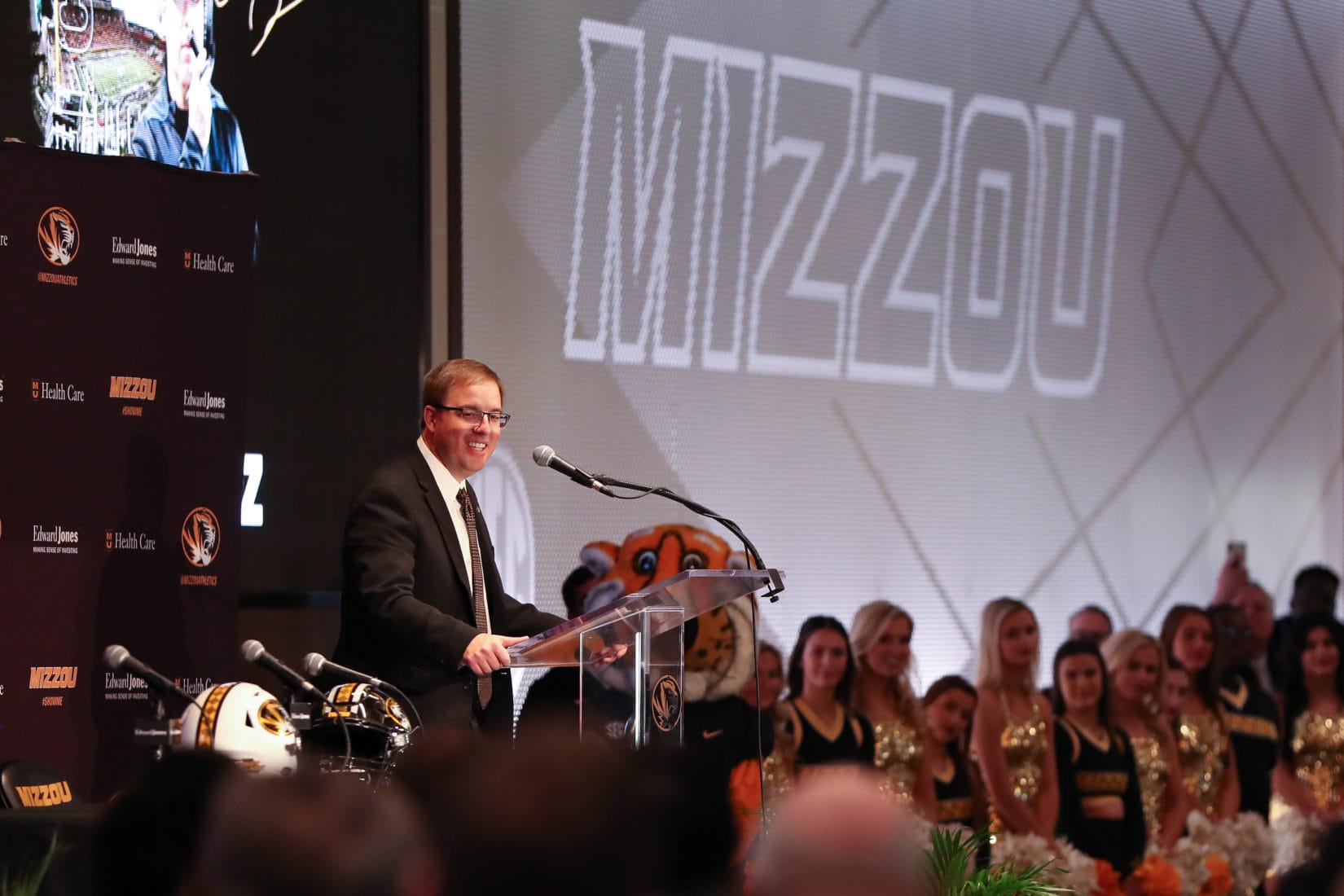 Much of that enthusiasm has been driven by Drinkwitz’s first impression, which includes the sense that he carries over some success from his earlier stop, or at least a plan to get there. He set the bar high in his opening press conference. “We’re going to win the SEC East and a bowl game with class, integrity and academic excellence, and it’s important for me to do it with those three things,” Drinkwitz proclaimed. He says he’ll devote more time and effort to finding the next crop of Tiger players from within Missouri’s borders, ones who match his F.I.T.T. profile: “Focused, Intangibles, Talented and Tough.” Why? “Those four characteristics are the hallmark of a championship football program, and those are the kinds of kids that we’re going to recruit and I know those kids are in Missouri.”

There’s some history between the new coach and the Show-Me State. Drinkwitz’s coaching career began not too far away in his hometown of Alma, Arkansas, and his brother Jeremy is president of a hospital in Joplin. Drinkwitz hasn’t been shy about showing who he is since arriving at Mizzou. He seems grounded in his personal faith — when a reporter asked him to reflect on his fast rise in the sport, Drinkwitz quoted Proverbs 16:9 — and perhaps a sense of humor, as the quips are starting to stack up.

For instance, what did getting a year of head coaching experience teach him? “I’ve only got about eight more haircuts left.” What would be different if he had been offered a job like Missouri’s before proving his worth at Appalachian State? “I probably wouldn’t have gotten the same contract value.” He follows the jokes with substance, but Drinkwitz understands that in college football, style points matter. He’s active on Twitter (@CoachDrinkwitz), and when the camera caught him at the Braggin’ Rights basketball game in St. Louis, his first move was to raise his arms to pump up the crowd. After all, as he told reporters before the tipoff that day, “St. Louis is passionate about St. Louis.”

The quotable moments often give way to the moments of substance MU administrators rave about; the reasons they signed a deal to make Drinkwitz a $4 million-a-year man for the next six years (“It’s humbling to know that the entire state is putting their hope in our football program, and to my vision,” he said about the trust placed in him). The moments that will ultimately define the coach’s time at Missouri won’t be in front of a microphone, but out on a gridiron for all to see and hear, praise or admonish.

After all, the end of the Barry Odom era came about with different opinions among Tiger fans about how to push the program in the right direction. So perhaps it was not lost on Eliah Drinkwitz that his first statement as Missouri’s new football leader should conclude with a call for help, to assert that he could not go it alone on a quest to build a winner.

“We must reignite our passion. We must unify our purpose. We must restore the pride in Mizzou football. We must all come together, believe in our players, believe in our mission. We must compete every single day to be better today than we were yesterday. And if we do that, the future is bright at Mizzou and I can’t wait to push this program forward. MIZ!”