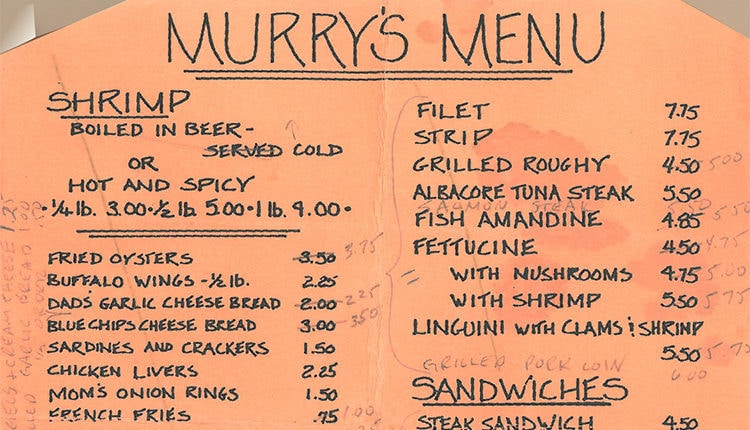 Speak with any restauranteur who has been in the business more than 10 years in CoMo, and you’ll find an intriguingly intertwined evolution.

Most of the locally owned restaurants can be traced back in some way to three places: Murry’s, Boone Tavern and Booches. Sure, there were places before Murry’s and Boone Tavern — and maybe Booches, but that’s going back a ways — but Columbia’s current dining scene was ultimately shaped from these three.

“The great thing about Columbia is that all the independent restaurants help each other,” says Trish Koetting, co-owner of Hoss’s Market and Rotisserie. “It’s friendly competition; anyone in the industry would do anything to help somebody else. That’s the nice thing about the restaurant community here, that everyone wants everyone else to succeed.”

Kurt Mirtsching, general manager of Shakespeare’s Pizza, agrees that the locally owned restaurant community is unlike any chain restaurant, partly because its members need the mutual support. “Chains have other restaurants to draw on for support and ideas, but when you’re just one restaurant, you don’t have that breadth,” he says. “A lot of the people that are independent (restaurant owners) share knowledge, insights and employees.”

Mirtsching is definitely right about one thing: The local restaurants share a lot of employees. Not convinced? Keep scrolling.

If you’re not familiar with the history of Columbia’s dining scene, there is one place you have to know about before successfully tracing the connections. Trattoria Strada Nova, which was on Ninth Street where 44 Canteen is now and offered Northern Italian cuisine, was a hub of activity for restaurant owners, bartenders and workers in the ’90s and early ’00s, before closing in 2008. Many of the people who went on to open restaurants in Columbia have some sort of connection to Trattoria.

During its prime, Trattoria was owned by Rocky and Cheryl Galloway.

Got it? Let’s dive in and start where it all began — Booches Billiard Hall.

Established in 1884, Booches has been at its current location on Ninth Street since 1928. Back then, such restaurants weren’t as unique as they are now. “A long time ago, places like Booches were kind of a dime a dozen,” says Mike Odette, chef of Central Bank of Boone County and former owner of Sycamore. “The three owners who took it over in the ’70s liked the oldness of it, and they curated it and made it into what it is today.”

Odette worked at Booches in the early 2000s (after his time at Trattoria Strada Nova) and went on to open Sycamore in 2005 with Sanford Speake, who still owns the restaurant on Broadway.

Odette was working when Speake applied for a job at Trattoria. “He wandered in one day, and I didn’t need to hire anyone, but I saw his résumé and decided to find a place for him,” Odette says. The rest is history.

Flyover ties back to Booches through Sycamore, but it also has a direct tie. One of the owners of Booches from the late ‘70s to early 2000s was Jerry Dethrow, whose son, Dan Dethrow, co-owns Flyover. The current owners of Booches, Charles Kurre and Rick Robertson, both worked at Booches. Adam Wells-Morgan, a co-owner of Flyover, worked at Trattoria under Odette.

Todd and Susan Schapira also worked at Trattoria and then went on to open Abigail’s Restaurant in Rocheport.

Eli Gay, who owns Café Berlin, was an employee of Sycamore under Odette and Speake — and also worked at Cucina Sorella.

Ben Parks, a co-owner of Barred Owl, worked at Trattoria, Sycamore, Les Bourgeois and Bleu Restaurant before opening Barred Owl with Josh Smith. Parks and Smith met while both worked at Sycamore, although Barred Owl took a few more years to be born. The head bartender at Barred Owl, Andrew Ruth, also worked at Sycamore and was one of CACC Culinary Arts Program Instructor Brook Harlan’s students at CACC back in the 2000s.

Another Career Center student (under Jeff Rayl), Trey Quinlan, went on to open Red and Moe Pizzeria, where Trattoria once was and 44 Canteen is now, then Trey Bistro in the same space and then Wolf’s Head Tavern on Tenth Street, where Boss Taco opened in 2018.

Speake, the current owner of Sycamore, also worked for Sheals at Murry’s, which is off Green Meadows Road on Columbia’s south side.

Murry’s opened in 1985, about six years before Trattoria and is owned by Sheals and Gary Moore. Co-owner Sheals is at a loss to count the connections. “There are so many crosses between Murry’s and other restaurants that it’s hard to say,” he says.

Ultimately the four restaurants that Murry’s has a direct connection to are Teller’s, Sycamore, Broadway Brewery and Main Squeeze.

Robin Weatherford and Deb Rust, the two co-owners of Teller’s Gallery and Bar, both worked at Murry’s with Sheals. Weatherford also worked at Trattoria, according to Odette.

Leigh Lockhart, the owner of Main Squeeze, worked with Sheals at Murry’s before opening her natural foods café downtown on Ninth Street.

Still with us? Let’s uncover the host of Nachos Bianco next.

Although it didn’t make it on the graphic, Flat Branch Pub & Brewing has had a big impact on Columbia’s dining scene: It’s where the owners of Sophia’s and Addison’s all worked. “Our family tree is fairly specific,” says Matt Jenne, co-owner of Sophia’s and Addison’s. “All four of the original owners were part of the opening crew at Flat Branch in 1994.” The four original owners were Jenne, Brad Pippen, Adam Dushoff and Jeremy Brown.

However, some of them knew each other before Flat Branch. Pippen, no longer an owner, and Jenne both worked at University Club together. At one point, Pippen, Dushoff, Jenne and Brown all worked for Dick Walls, who owned Boone Tavern and The Heidelberg.

“There was a certain point in time in the ’80s and ’90s where there seemed to be thousands of people that were a part of the restaurant culture.” Dushoff says. “They grew up and opened businesses from there, and it’s a fascinating story once you tie all the threads together.”

One of those threads is John Gilbreth, owner of Pizza Tree, which is downtown just around the corner from Main Squeeze. Gilbreth worked at Sophia’s before being hired by Mirtsching, general manager of Shakespeare’s.

“John worked for us for many years — we actually have his picture cutting peppers in our training manual still,” Mirtsching says. “He called me up some time ago asking about delivery and logistics, like keeping pizzas warm, products to hold them, that sort of thing, because he wasn’t involved in delivery for us.”

One thing that sets Columbia’s local dining scene apart is that everyone wants each other to succeed, Mirtsching says. “We (owners of local restaurants) recognize that people go out to eat at different places. People don’t just come to Shakespeare’s. So, it just makes sense to share advice and information with each other to help all local restaurants succeed.”

Another former Shakespeare’s employee, Ron Rottinghaus, who now owns Uprise Bakery, gathered more than just inspiration from the pizza joint: “He actually bought some ovens from us,” Mirtsching says. “I helped him set them up at his place to bake bread and still buy his bread at the store.”

Dick Walls, founder of The Heidelberg and Boone Tavern, which closed in 2012, is one of the bigger pieces in Columbia’s dining history puzzle.

Hoss, of Hoss’s Rotisserie and Market, worked for Walls in the ’80s. “My husband,” Trish Koetting says, “Hoss, whose real name is Jim, started at Boone Tavern as a cook in 1983.” Fast forward a few years, and Trish was working as a cocktail waitress there as well. Trish later became general manager of another one of Walls’ restaurants, called The Smokehouse, and after Hoss and Trish had worked at Walls’ restaurants for more than 30 years combined, they decided to open their own place in 2002.

Remember that the owners of Sophia’s and Addison’s also worked at either The Heidelberg or Boone Tavern at one point as well. Travis Tucker, owner of Bleu Restaurant & Catering, worked at Sophia’s back in the day.

Bleu had a hand in the creation of 44 Stone Public House and later 44 Canteen. Mark Sulltrop, the owner of 44 Stone Public House and 44 Canteen, met his former business partner, Dave Faron, at Bleu. Sulltrop was executive chef and hired Faron as a sous chef. The two parted ways after Bleu but reunited to create 44 Stone in 2011 and 44 Canteen four years later. Faron and Sulltrop both worked with Hoss — Faron at Hoss’s Market and Sulltrop at Boone Tavern, Sulltrop also worked with Harlan at University Club as the sous chef; Eli Gay of Café Berlin was also working at University Club at the same time.

Perhaps more of a string than a thread, Brook Harlan worked at Glenn’s Café at one point, and his babysitter as a child, Sanny Camp, opened Bangkok Gardens in what was the basement of Glenn’s Café when it stood on Ninth Street where Kaldi’s Coffee is now. Kamp sold Bangkok Gardens to John Pham, who is the current owner.

Did we miss a connection somewhere? Let us know; we might need to reopen the case for a Part 2.

Hot Off The Press