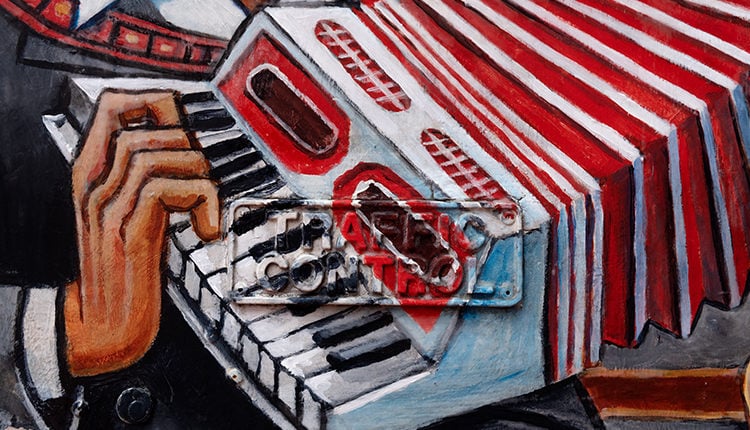 A Perfect Mix of Art and Practicality

If you’ve ever wondered how a guitar-playing deer made it onto a traffic box in downtown Columbia, you’ve come to the right spot. Every year, the City of Columbia hires local artists to decorate downtown’s traffic boxes not only to deter graffiti, but also to bring some local art into everyday life. It’s a great way for local artists to get their work out into the world and to expose Columbians to some of the talent that lives within our city. We spoke with six of these so-called Traffic Box Artists to learn why and how their art came to be part of downtown’s everyday routine.

Why did you first apply for the program?
“I was in school at the time and the Columbia College faculty are always looking for opportunities for their students. I learned about it there and thought it would be an interesting and creative challenge. This was my first piece of public art, so that was a unique medium for me.” 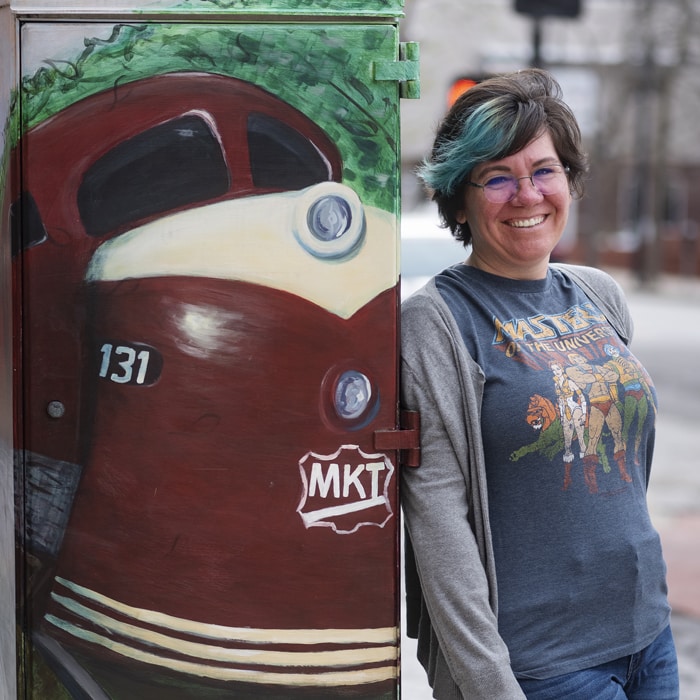 What is your background in art?
“I went to Columbia College’s art program for painting and drawing and my focus has been primarily children’s books illustrations. My first picture book will release this fall.”

What was the inspiration behind your traffic box design?
“That area of Columbia — especially being right there on Seventh — has the cobblestone road and it always makes my imagination go to the past when the roads were like that everywhere instead of those little spots that time has allowed to stay. It sparked my imagination and so with the MKT trail, I started digging. I knew I wanted to focus on what that corner had seen over the years and its proximity to where the train station used to be.”

What does the program bring to downtown?
“I think it adds a unique atmosphere to our city. Columbia is not a huge city, but it has so much public art that really emphasizes the importance of art in the community and the creativity of the people who live here. It creates a colorful and welcoming and inspiring atmosphere.”

Why did you first apply for the program?
“I believe I received a postcard in the mail from the Office of Cultural Affairs that they had sent to artists that had applied for things in the past and maybe didn’t win. So, I went for it.”

What is your art background?
“I am a high school art teacher in Hallsville, about to start my 18th year. My mother was an art teacher, too, so I guess it’s in my blood. I opened my business, Outside the Lines Studio, in 2013 because I was receiving a lot of orders, both commercial and residential.

What was the inspiration for your design?
“I visited Glenn’s Cafe, and sat on their patio across from the plain, empty traffic box. I noticed a lot of people walking their dogs in the area and I’m definitely a big fan of dogs. Because the two boxes had a total of eight sides, I knew I wanted to ask the Humane Society about the most popular dog breeds in Columbia. I figured if I were going to paint dogs on the traffic boxes downtown, the breeds should have something to do with the City of Columbia.” 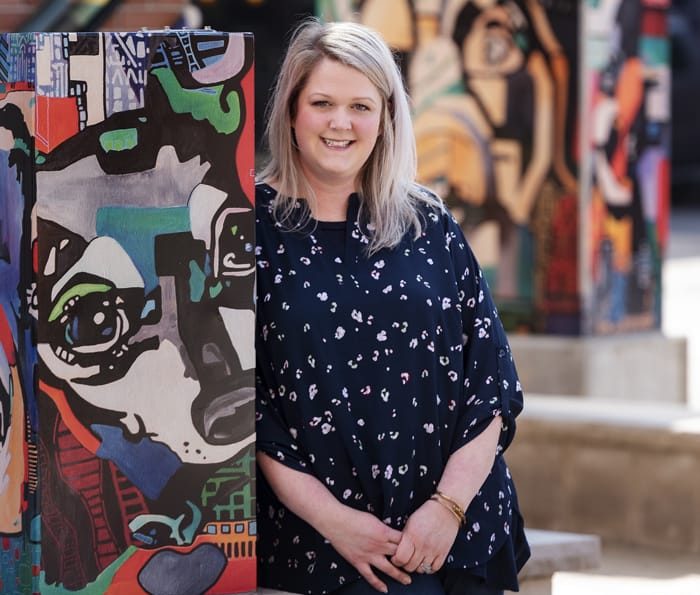 What does the program bring to downtown?
“Being a high school teacher, I know many students take their senior pictures in downtown Columbia. I absolutely love seeing photographs being taken by local artist’s work. These decorated boxes are just so much prettier and interesting than a plain traffic box. I appreciate that the city chooses a myriad of artists with completely different styles to add to the variety of art downtown. 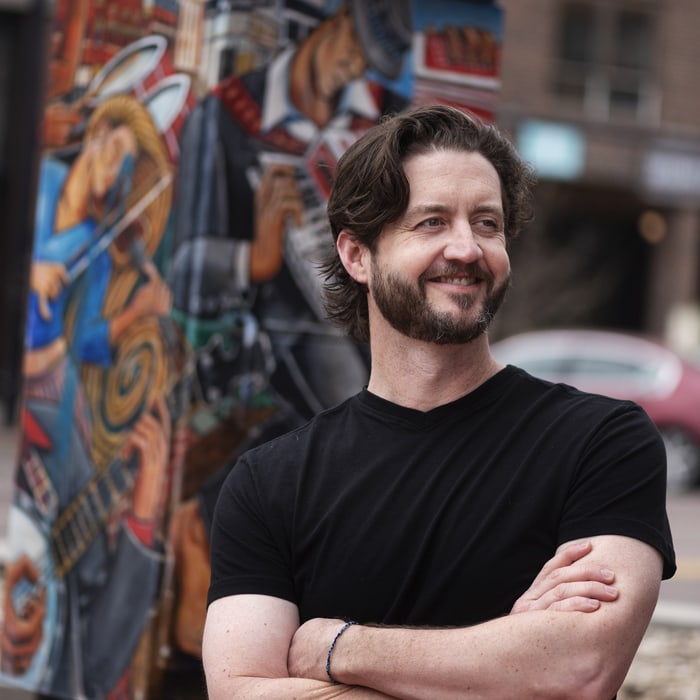 Why did you first apply for the program?
“I was actually asked to do it because I was part of a local festival at the time. There was a lot of graffiti going on and so the police department threw in some money, Central Bank of Boone County threw in some money and the other 1/3 came from the Office of Cultural Affairs and it went over really well — so that’s how the program started.”

What is your background in art?
“I have my undergraduate degree in fine arts from University of Missouri in St. Louis and my master’s in painting and printmaking from University of Missouri in Columbia. My most recent project was at the new Columbia Sports Fieldhouse and involved a lot of transparencies, LED lights and plastics. I enjoy creating art in many forms, anything from graphic design to airbrushing. But painting doesn’t lose power like a computer does.”

What was the inspiration for your traffic box art design?
“It was based on a design I did for Roots N Blues N BBQ, which was actually starting that year.”

Why did you first apply for the program?
“It was a good opportunity — I’m always looking for ways to get work that pays. The city’s program is a great local opportunity.”

What is your background in art?
“I’ve been making art in some capacity for most of my life, but professionally since 2004. I have my Bachelor of Arts from the School of The Art Institute of Chicago, my master’s from New York University in arts administration, and I am currently getting my master’s of fine arts from the University of Missouri. I was previously on the board of directors for the North Village Arts District and owned Resident Arts as well. I don’t really have a favorite medium, but right now I’m doing a lot of sewing, painting and photography.” 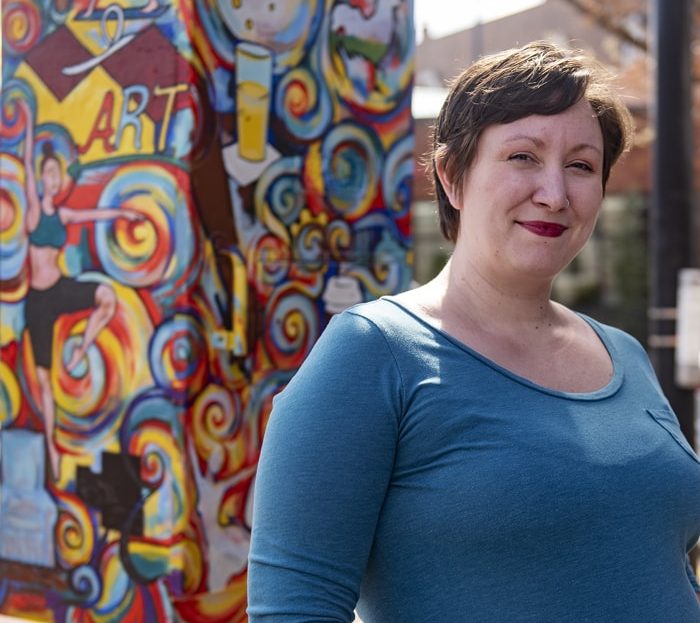 What was the inspiration for your design?
“It was supposed to be a visual representation of the businesses in the North Village Arts District, so there’s a coffee cup for Fretboard and a dancer for MCA and a burger for Ernie’s; there’s these visual representations and they kind of follow that location too. The square of the traffic box is the block of 10th, Walnut, Orr and Park streets and each side follows a block along with images. This was done in 2016, and how much that has changed since then? So, it ended up being a moment in time — a snapshot related to that business district.”

What does the program bring to downtown?
“I think it does something in a practical way and in an artistic way. Studies show that public art deters low level tagging on property because most graffiti artists don’t want to tag over someone else’s work. Historically the traffic boxes have had problems with that. From an artistic perspective, it makes art part of the normalcy of the downtown landscape. That’s really important because not everyone is going to walk into a museum or gallery to see art, so it brings it into life. It’s also an interesting way to create a dialogue between the public and artists. The program also helps local artists; everyone who has a presence in Columbia has a corner that they have painted which is kind of cool, I think.” 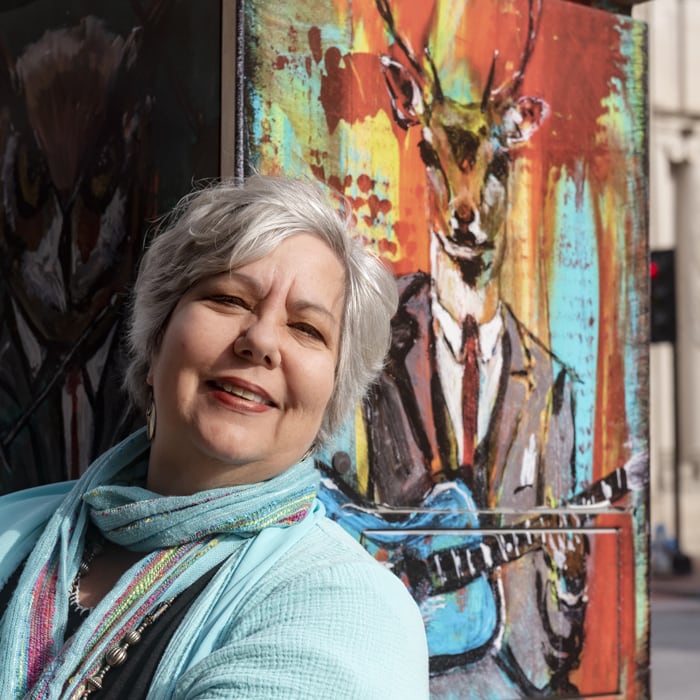 Why did you first apply for the Traffic Box Art program?
“I have loved that program and I watched really awesome artists, of which some are close friends, do different traffic boxes and it seemed like a really great program. After watching the cool art pop up on the boxes, I decided I really needed to apply for that. I wish I had applied sooner.”

What is your background in art?
“I own Artlandish Gallery in the North Village Arts District and have a working studio where I produce my artwork. I got my bachelor’s in fine arts from Columbia College and after being a graphic designer at KOMU for 10 years, decided to pursue fine art. I became the visual director for the art for Roots N Blues N BBQ and I still do that. That’s tons of fun.”

What was the inspiration behind your design?
“It kind of correlates to Roots N Blues because at the time we had moved the festival to Stephen’s Lake Park and the artistic director at the time had suggested we use little critters as our theme, and so I was consumed with relating art with music and animals and the park. I had done a series of works of animals playing instruments and so that’s what I submitted.”

What does the program bring to downtown?
“I think it brings art to the masses, which makes me really happy. That’s kind of what I live for with art. I think everyone should be exposed to art and I think that is like a happy surprise — you’re walking down the street and then you see this artwork. It’s kind of a gift that keeps on giving. I open the city program that they send out and there’s my artwork. I do love having my artwork out there in public.”

Why did you first apply for the program?
“Columbia is an artistic town and our creative community is thriving. Whether it be art, music, cinema, theater, fashion or dance, we are fortunate to have so many talented local artists and bands in our city. I relished the chance to make my own mark in the public art program, too.”

What is your background in art?
“I’m deeply connected to the arts here: I have worked as the head of promotions for our arthouse cinema, Ragtag, since its inception. Remember when we used to paint the individual tickets by hand? That was me! I’m also a multi-instrumentalist (guitar, vocals, flute, sax, trumpet, bass clarinet) in the bands Vulvette (country), Maxito Lindo (rock), and Nevada Greene (ambient). I consider myself lucky — I’ve always been creating art and music. I also have a BFA in painting and printmaking from Mizzou.” 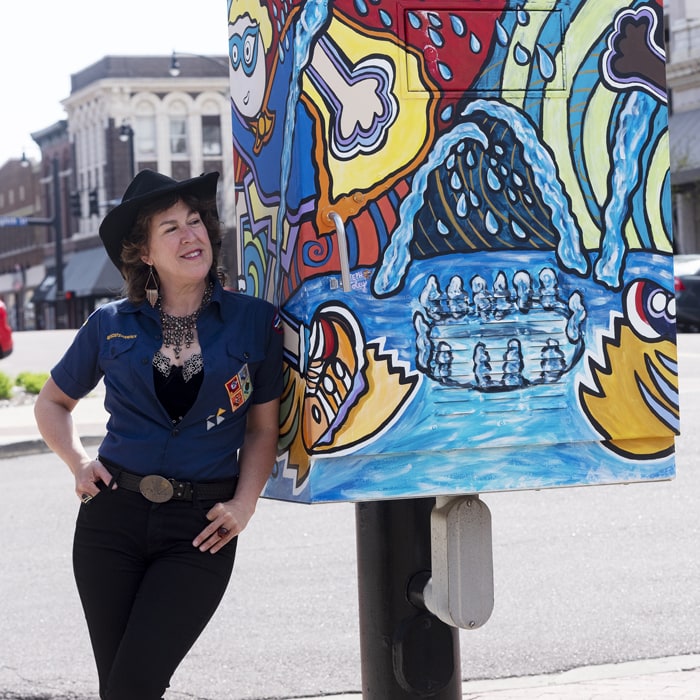 What was the inspiration behind your traffic box art design?
“Columbia has awesome parks. My design highlights the simple joy of playing in the spray grounds on a carefree summer afternoon.”

What do you think the traffic box program brings to downtown Columbia?
“The decorated traffic boxes bring color to our environment and — along with the parking garage sculptures and the light sculptures — show that Columbia cares about the arts. Public art is a chance for artists and the community to interact. It was such a joy to actually be out on the street painting the traffic box. I met a lot of interesting people and even better, a lot of cute dogs!”