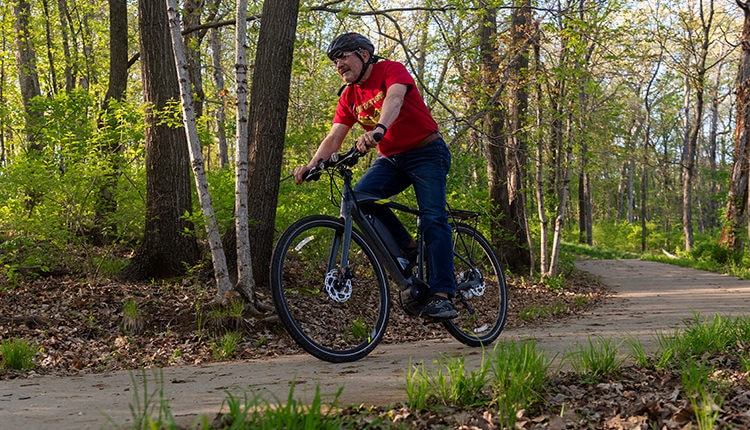 Electric Bikes are Filling the Trails

E-bikes (electric bikes) are everywhere. More people are riding them along the streets and trails of Columbia than ever before. But it’s a hidden trend. Spotting an e-bike on the move is tough because e-bikes look just about the same as standard pedal-powered bicycles. Their motors are all but invisible — completely silent and built into the bike frame or wheel. And their batteries are inconspicuous, blending into the bike frame. Is that person pedaling past you on an e-bike? If the rider just crested a hill and there’s a smile on that person’s face instead of an exhausted grimace, it’s probably an e-bike.

E-bikes are becoming more popular, nationally and locally, for a variety of reasons. Demographic trends account for some of the market growth. A higher percent of the U.S. population is 65 or older. Mark Bendel, service manager at Walt’s Bike Shop says, “We have a lot people 60 and older who want to remain active. They may have limitations in riding conventional bikes, so an e-bike is a perfect solution for those cyclists.”

Younger adults are also fueling the popularity of e-bikes. According to industry reports, the sale of e-bikes has grown eightfold since 2014. In part, the surge in sales can be traced to technological progress. Batteries are now less bulky and more powerful, holding their charge for more miles than they used to. As the bikes have become more user-friendly, more people have become earth-friendly, wanting a means of transportation that doesn’t add to our polluted environment.

Unlike electric motorcycles or scooters, which provide riders no exercise and nothing to do with their feet, e-bikes are designed to assist — not take over. E-bike riders pedal, but when they switch on their battery-powered motors, the pedaling becomes easier. They can go farther, faster and with less exertion. Some e-bikes can accelerate up to 20 miles per hour or more with no pedal assist. Others cut the power as soon as the pedaling stops. But all rely on lithium-ion batteries that can provide power for between 10 to 60 miles of assisted riding before needing to be recharged, according to Bendel. 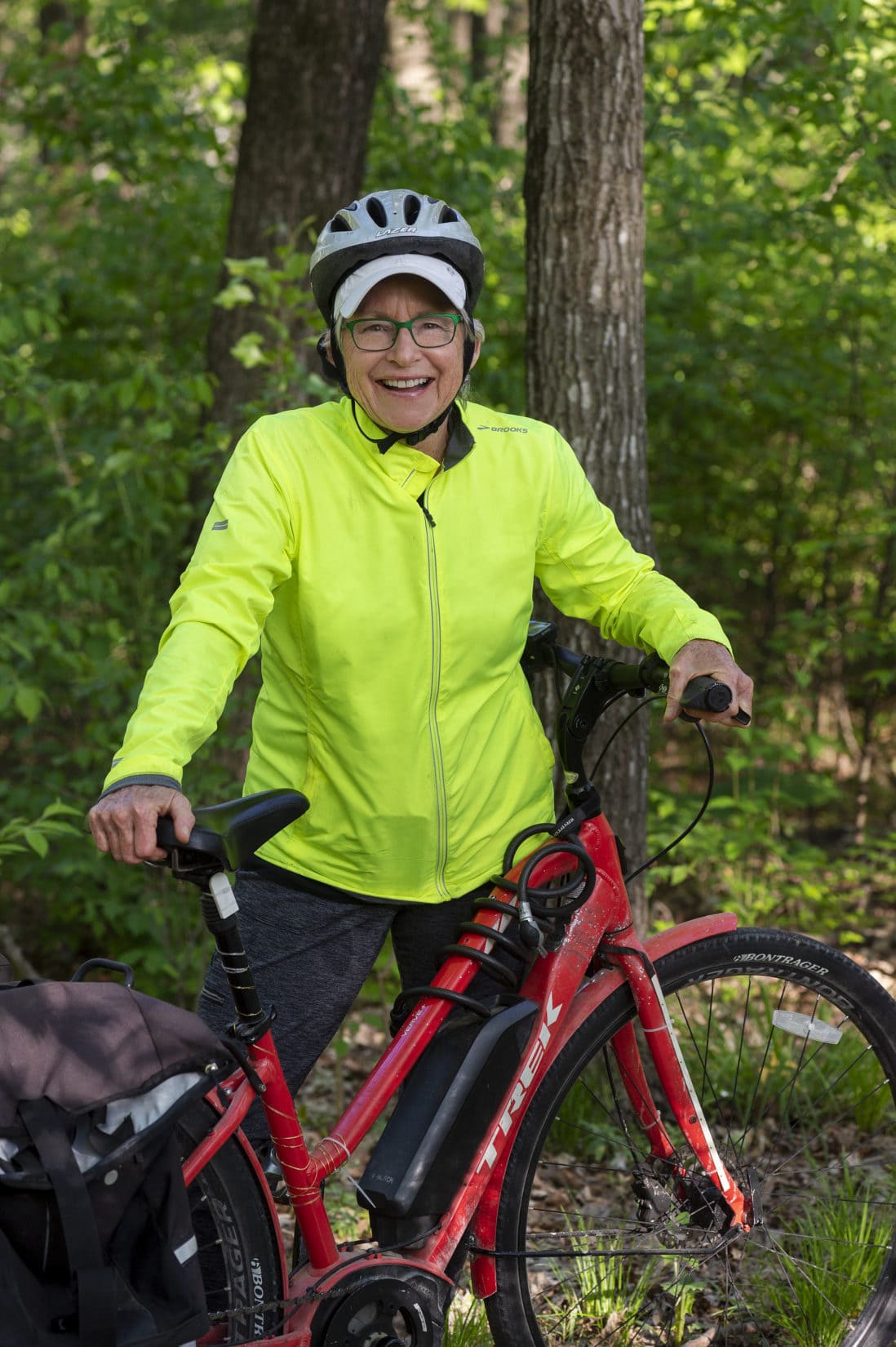 “They are amazing,” says Lawrence Simonson, chief strategy officer for PedNet, a Columbia advocacy organization that promotes biking and walking. Simonson, who is 40 years old, doesn’t own an e-bike yet, preferring standard bikes for himself. But he says that others his age are finding advantages to owning e-bikes. In addition to making longer commutes possible, e-bikes help less experienced riders keep pace with faster friends. “People my age ride them as a mode of transportation and recreation. Some have bought their electric bike because it helps them tow their kids.”

Two things are slowing down the adoption of e-bikes. Price and perception. The starting price for an e-bike can be about $1,500. For a better-quality model that can be repaired and used for many years, the price is closer to $2,000 to $2,500. There’s also a perception among young people that it’s a bit wimpy to ride a bike that assists the rider artificially. (Think of the stigma of riding a bike with training wheels.)

Although it will take time to get the price of e-bikes down, overcoming the perception problem is easier. During Bike, Walk and Wheel Week, held in Columbia each May, bike shops provide attendees with a chance to conveniently test ride different models at one location. “They may come scoffing, but people who have never ridden an e-bike go for rides and it completely changes their view,” Simonson says.

For Pam Spencer, a retired school teacher who is now an Iyengar yoga instructor, it was e-bike love at first ride. One of her friends was so enthusiastic about them that about a year-and-a-half ago, Spencer tried one out. “I was sold as soon as I got on. I loved it. It makes you feel like a kid again,” she says.

Although the cost of an e-bike seems high, e-bikes can save their owners’ gas money. Commuters don’t need a handful of quarters for parking fees, and end up putting fewer miles on their cars and more on their e-bikes. “I hardly ever use my car,” says Spencer. “When I get in my car, I’m like ‘Why am I dragging this big machine around?’”

As e-bikes become more affordable, their novelty will wear off and people will consider them as just another way of getting from place to place. Spencer’s grandchildren don’t think twice when they see her riding her e-bike. “Your lifestyle becomes normalized for your children and their children,” she says. 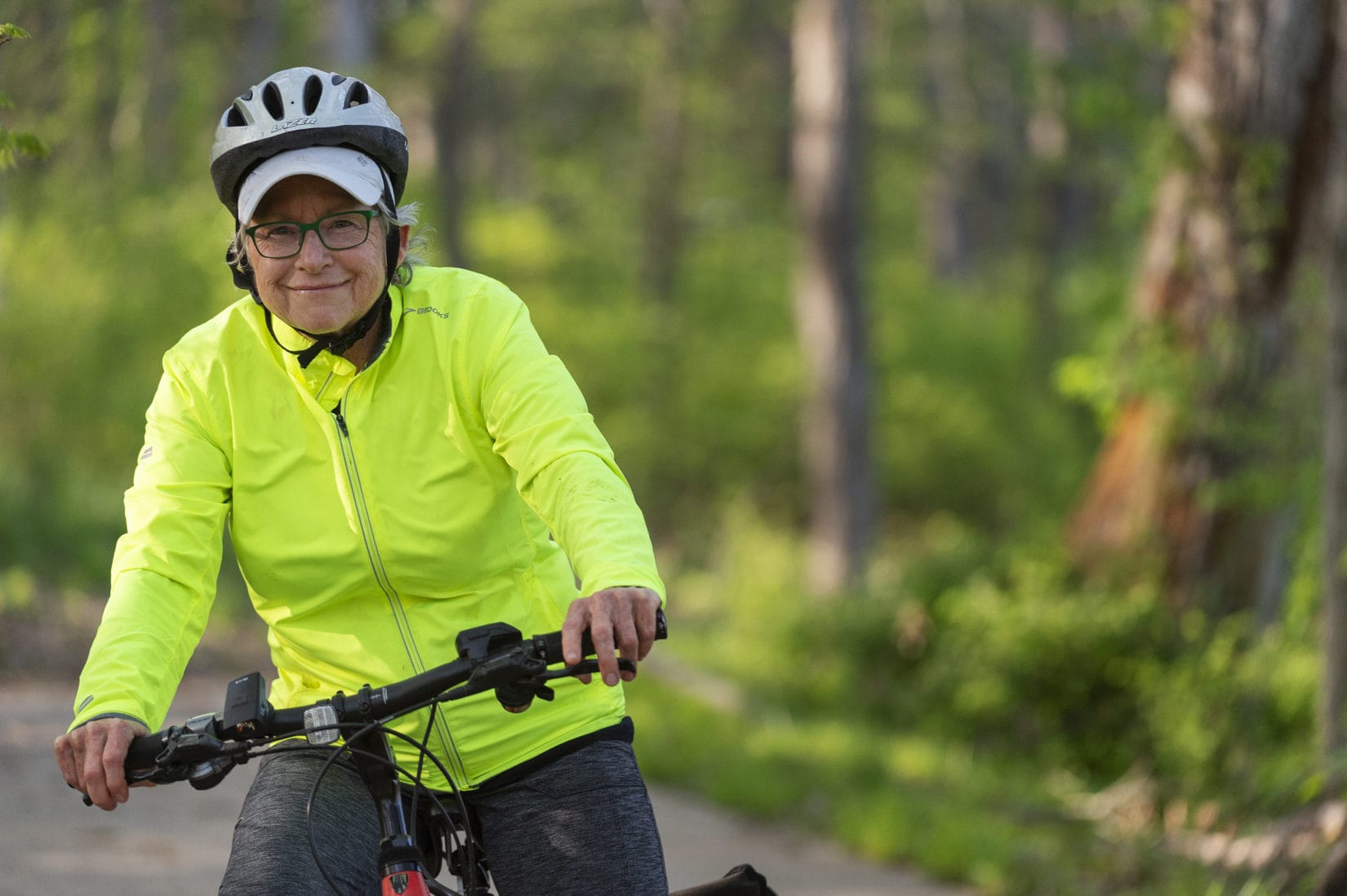 It’s a healthy lifestyle that grandparents, such as Spencer, are modeling. Studies show that riding an e-bike requires less exertion than riding a standard bike, but more than walking. Simonson of PedNet is glad to see more people getting more exercise because of e-bikes. “A benefit of e-bikes is that they allow a cyclist to ride more often and get more aerobic exercise. The fact that we’re getting more people out on bikes is something we should all be excited about,” Simonson says.

Uphill or Down, My E-bike Keeps Me Going

“I love to ride my bike, but I hate hills. I’m sure that gasping for air and learning to ignore the burning pain in my thigh muscles is good for me. But it’s not for me.

Usually, I ride on the MKT Trail, which is flat and only a few miles from my home. Unfortunately, those are uphill miles. The only route to the trail from my house starts at the top of one of Columbia’s steepest valleys. Going down the road toward the valley’s bottom is easy enough; going up is a struggle beyond my ability. Even if I were able to reach the top on my way to the trail, I’d face the other side of the hill on my way back. It’s uphill going and coming. 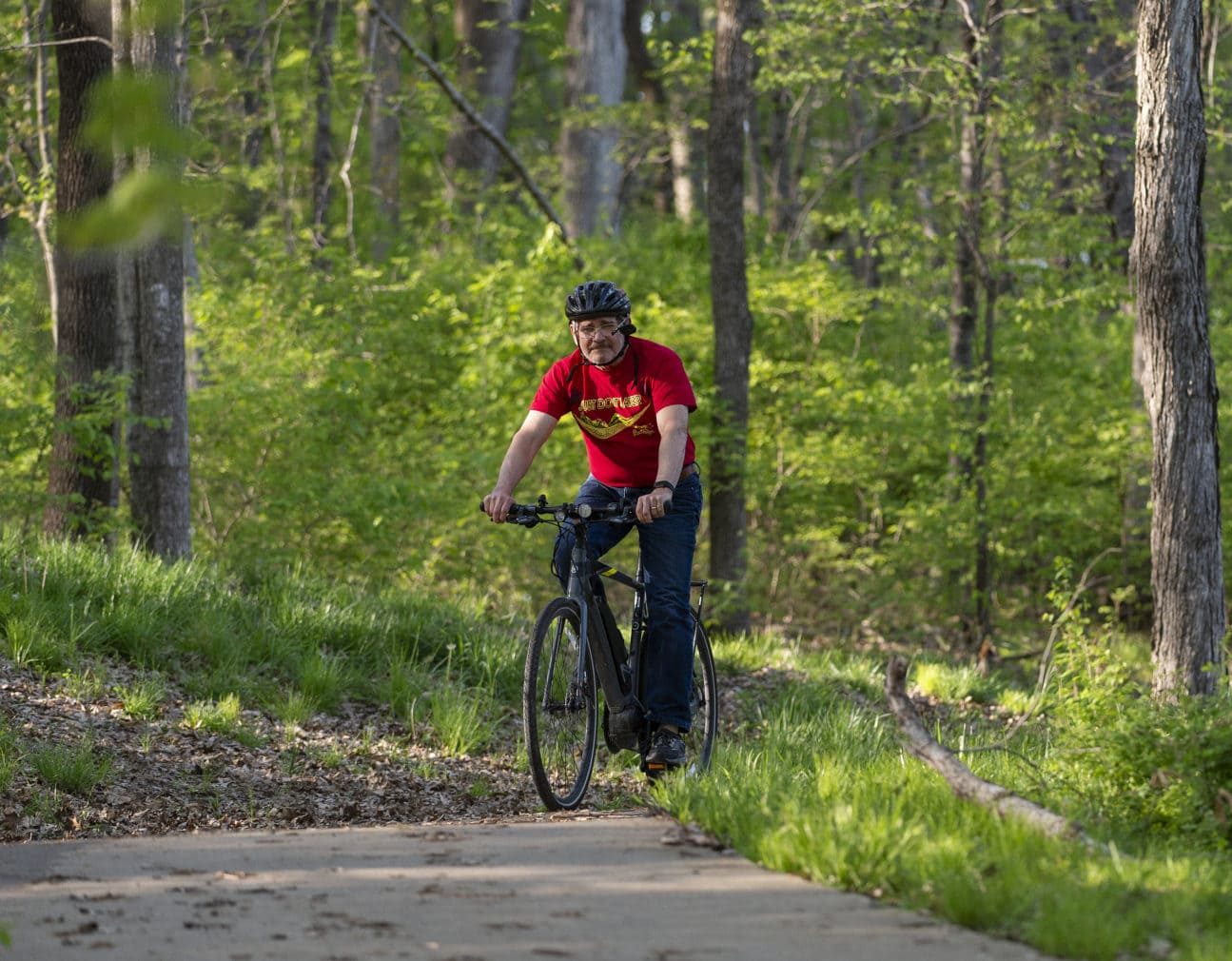 The only way around this hill was to put my bike in my truck, drive the three miles to the Scott Boulevard trail entrance, take the bike down, then ride. This seemed complicated and even extravagant — burning gas so that I could pedal.

I needed to find an easier way to keep riding my bike. That’s when I started thinking about electric bikes. I had this idea that with an electric bike I’d be able to scoot up hills and avoid becoming sore and exhausted.

In March, I started checking out prices and models of e-bikes available in Columbia. On one of the first warm days of the year, I went on my first test ride. It took the salesperson only a minute or two to explain how to ride it. You just pedal like on a regular bike, then when you want to have the electric motor help, you push a button. A few seconds after getting on, I pushed that button and felt a gentle nudge. The next thing I knew I was going just a little bit faster without pedaling any faster. Wow! Pure fun. It was like riding a horse that was straining at its bit.

After a few visits to several bike shops, I found the e-bike that was right for me, bought it and started riding it the next day. I still don’t like hills, but I no longer dread them. Now, when I get to the top of a hill, I am no longer panting or aching. What had been a struggle is now just another pleasant leg of my trip. I still know that I’ve been going uphill but, really, it’s about five times easier. I don’t have any urge to get off my bike and walk it to the top. And after reaching the crest I still have plenty of energy to keep on going.

I wish I had known about e-bikes years ago. Sure, I’m not getting the same workout as someone who can huff and puff their way to the top of any mountain, but that’s not my goal. I like the more moderate exercise, and I just want to be able to keep on riding.”

Groshong Restores The History Of Agriculture One Tractor At A Time