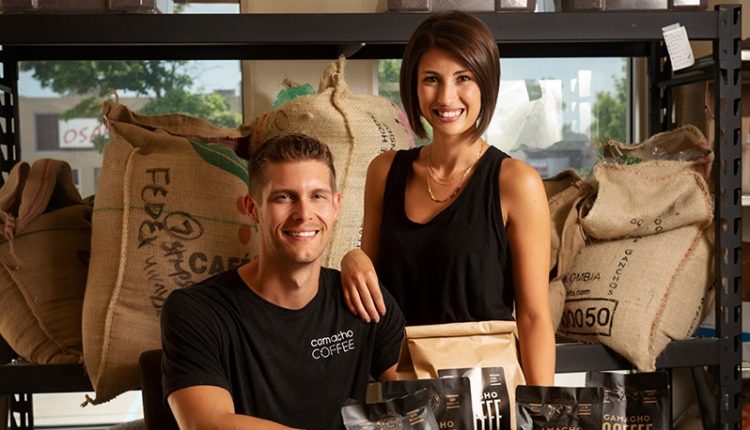 Changes are brewing at Camacho Coffee, a roasting and distribution business owned by Jesse Walters and Megan Meier-Walters. The business is expanding and will be moving early this fall to a new location at Copperstone Plaza, behind Addison’s on Vawter School Road. Currently, Camacho roasts and packages its coffee in a commercial kitchen it shares with B&B Bagel.

The new 1,250-ft space will have room for a second air-roaster and a section for customers who would like to try the different coffee blends. “I compare our new facility to a brewery where they are producing a lot in the back and have a tasting-room in the front,” explains Jesse. He handles the day-to-day work of roasting coffee and distributing it. Megan works fulltime at House of Brokers but makes time to create Camacho’s marketing plans and to find different charities for the business to support. Camacho Coffee gives 10% of its profits to local groups. Although they are young – Jesse recently turned 30, and Megan is 26 – they are determined to have an impact on the mid-Missouri community. “We got our marriage license three years ago and started our businesses within a three-month timespan,” Megan says.

Since then, Camacho Coffee has been picked up by a number of mid-Missouri restaurants and cafes as well as by HyVee, Schnucks, Clovers Natural Market and the newly-opened EatWell grocery store. Through its coffee subscription service, the air-roasted beans can also be purchased from their website, camachocoffee.com. 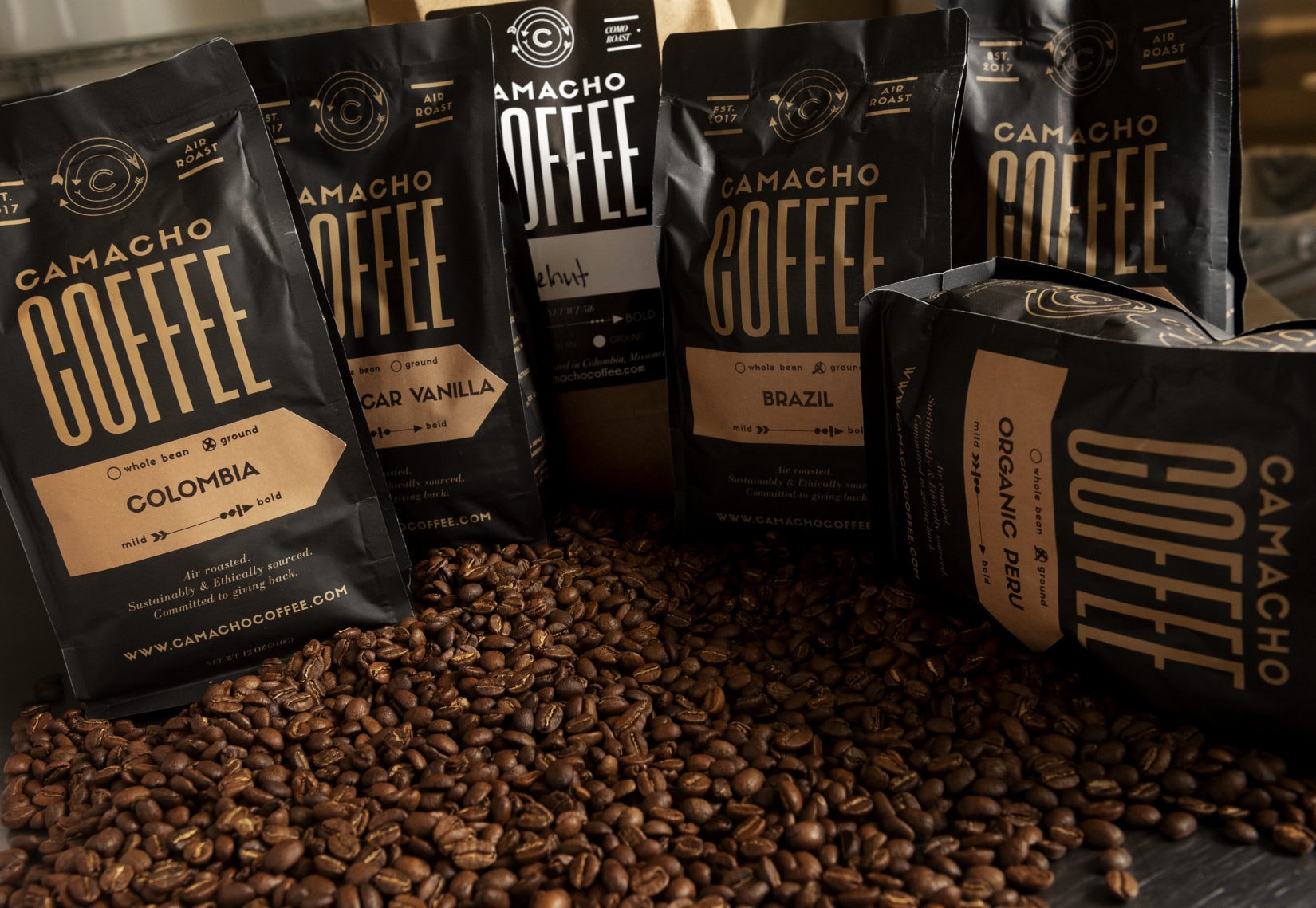 Most people are familiar with drum-roasted coffee, which is the usual way coffee beans are heated. “I compare the drum roasters to cement trucks. They’re just a large spinning chamber,” Jesse says. But the air-roasting process that Camacho relies on uses different equipment that floats beans on a bed of hot air, resulting in beans that are never scorched, burnt or carrying the flavor of smoke. The air-roasting process leads to a less bitter cup of coffee with a smoother, light taste.

The couple started roasting coffee beans back in 2017, after a dermatologist recommended that Megan stop drinking coffee to see whether it was having an inflammatory effect on her body. She quit, and her medical issues disappeared, but she missed her morning cup of coffee. Like many other people, she liked the flavor of coffee but didn’t like the way it made her body feel. Many coffee drinkers get an occasional sour stomach or worse – a case of heartburn. Jesse had heard about air roasting and experimented at home with green (uncooked) coffee beans and a popcorn popper. Before long, Megan was able to start her day with coffee again and Jesse developed an idea for a business.

Having grown up on a farm in Boonville, Jesse always thought of himself as someone who could do things for himself. After getting his master’s in business, he realized that not only did he have the education necessary for a successful business venture, but he also had the independent streak that propels entrepreneurs.

More than just a way to make money, the coffee roasting business is a way for Jesse and Megan to build community. “Coffee is sort of a gateway business for other businesses to collaborate. People meet over coffee and they can grow their businesses together. It gets me excited to think that we can produce a product that brings people together so that they can grow the economy, their businesses and their relationships,” Jesse says.

Although other businesses also give a portion of their profits back to the community, Jesse and Megan make a point of getting to know the organizations they support. “We tell people that instead of just writing a check, we want to have a relationship with you. We want to know what it is you’re doing. Recently, I bought groceries for Coyote Hill and saved them time, money and resources,” Megan says.

Jesse’s immediate goal is to get more people to try Camacho. “If I can get a cup of coffee in your hand, you’ll experience the difference air roasting makes,” he says. Megan adds, “I ask people, do you like your coffee and does it make you feel good? Most of the time they say no to both. What sets our coffee apart is that they won’t have to fill their cup with a lot of milk and sugar.”