Steering Businesses in a COVID-19 World

Many Columbia businesses were on track for a record-breaking year — until this March, when the first COVID case was reported in Boone County. Health officials imposed a stay-at-home order and closed businesses deemed non-essential, such as retail stores, to prevent community transmission. In the last month, we’ve seen a partial re-opening of the county, including non-essential businesses, though they are not allowed at full capacity. As expected, cases began rising as Columbians returned to their somewhat normal routines. Some locally owned businesses have fared much better than others due in part to two things: what industry they are in, and how they pivoted while Columbians were stuck in their homes. The early decisions and solutions implemented by some businesses distinguished them from their competition and ultimately allowed them to survive the shutdown, thus far.

Following the end of Columbia’s stay-at-home order and preceding the passing of Columbia’s mask mandate, Inside Columbia Publisher Emeritus Fred Parry hosted a CEO Roundtable at Zimmer Communications with six local business leaders. The event was sponsored by The Broadway Hotel; the hotel’s award-winning chef Jeff Guinn catered the meal that accompanied the conversation.

It’s no secret that the impacts of COVID-19 have hurt businesses in Columbia. For the participants of this season’s roundtable discussion, those impacts varied. Kit Price, co-owner of Robinson’s Cleaners, says their retail section has been “decimated.” “My one thing I’ve been saying for the last two months is, ‘If you’re not wearing pants to work, you’re not bringing them into the dry cleaners,’ and that is exactly what is happening on the retail side.” However, Robinsons’ dry-cleaning business has been up, probably because people are aware of cleanliness more than before, she says. Robinson’s also does restoration, which has seen an uptick in business as more people have been attempting to cook meals at home, with unsuccessful results. Another uptick? COVID cleaning. Homes that have a confirmed COVID case are deep-cleaned to prevent spread to other housemates. 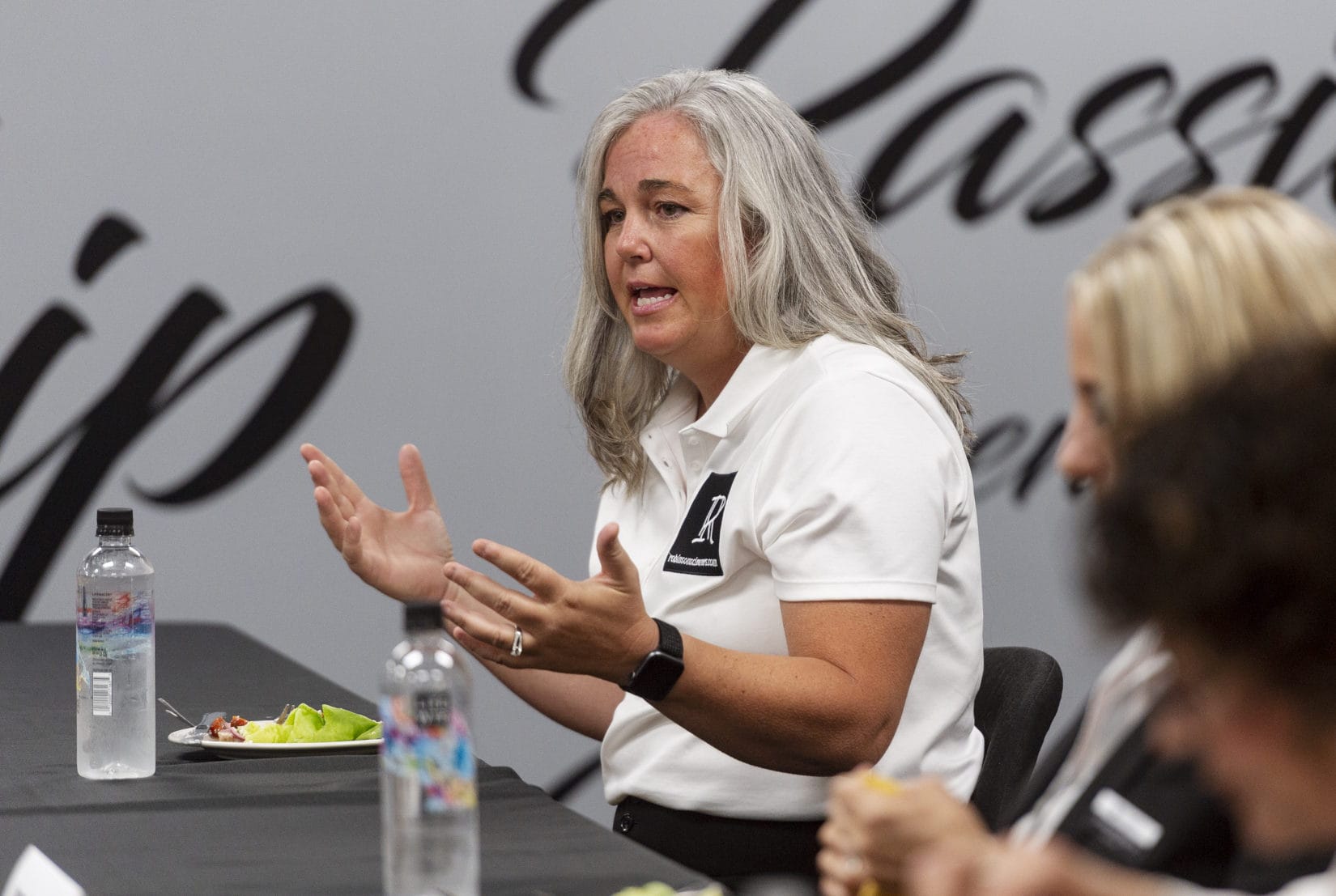 John Mullette, vice president/ General Manager of Culligan Water, says at the beginning of the pandemic, they immediately had to ration water. “Everybody was trying to buy 25 bottles instead of five, and we had to start rationing water to our customers to maintain supply chain, as we are the contact for all the hospitals and nursing homes for emergency water and had to maintain inventory,” he says. “But, overall” he says, “our business is doing well. Our water treatment side is skyrocketing. Our bottled water sales are coming back quite rapidly, up 25% in a week so far.”

You may have heard that Columbia is currently a seller’s market and Realtor Annamarie Hopkins with Columbia Real Estate emphasizes that fact. “We were considered essential workers by Governor Parsons, so we went out and sold homes wearing masks, gloves, and taking certain precautions in place,” she says. Overall, sales at Columbia Real Estate are actually up 6% and interest rates remain low. “The only issue is that we are struggling to have enough listings,” Hopkins says. The real estate market is so competitive in Columbia right now that agents are having to be online more than ever. “I wrote an offer just the other day in a gas station parking lot. I mean, that’s what you have to do in this business right now — it has been very different.”

The restaurant industry hasn’t been as fortunate as real estate during the pandemic, losing what some call the two best months in restaurant sales because of the cancelled MU graduation. Coley’s restaurant saw a 75% drop in sales in April and is still down 30% as of now, owner Brian Coley says. Jersey Mike’s Columbia franchise owner Sterling Sublett said those first few weeks of COVID cases in Columbia hit them pretty hard. “The one thing good for us is that we were kind of a to-go concept, anyway,” he says. “So that really helped us. We didn’t take quite as big a hit as the sit-down restaurants did, but I can’t believe that we have rebounded as well as we have. The last three or four weeks, we are a lot closer to where we’d like to see it and I just feel really thankful for that. The good Lord has kept providing and the local people really stepped up. They made it intentional to try to support us and other local businesses and we hope they will continue to do so as we don’t know how long this thing will last. We appreciate their support more than they know.”

Dryer’s Shoes downtown pivoted from their typical open hours to appointment-only after they were allowed to re-open. “We did two appointments every hour for 45 minutes, so that gave us 12 appointments a day, and then we would still do curbside. We had a really good response for it,” owner Justin Riley says. “They basically got a personal shopping experience for their own 45-minute appointment.” Dryer’s required customers and employees to wear masks from the beginning, he says. “If I have one of my employees get it, and we have to shut down for 14 days again for a second or third time, that is going to be catastrophic. I have to take the position I am fighting for my business. You know, as far as personal belief or freedom, it is my livelihood.”

As non-essential businesses were forced to close and essential businesses limited occupancy, many employees were either furloughed, laid off, or had their hours cut. What set a lot of companies apart was how they treated employees during this time and ways they helped raise morale. “That was probably the hardest part of the whole thing,” Sublett says. “I was pretty transparent with my employees, saying ‘I don’t know what’s going to happen,’ but thankfully we were able to keep everyone working that wanted to be working.”

Coley’s was also able to retain all of their full-time and long-term employees, but did lose part-timers, especially college students. As of June 30, Coley’s was limited to 40% capacity and had to keep their bar closed. “It’s hard to operate at such limited capacity,” Coley says, “but a lot of that to-go, off-premise revenue is helping out.”

Typically, Culligan Water hands out self-addressed customer feedback cards and gets around 40% back, Mullette says. One thing they’ve noticed during the pandemic is that they’ve been getting almost 100% of them back, all with positive feedback. “Our team is exceptional,” he says. “We just communicated openly with them all right off the bat, and we are blessed with complete cooperation from all.”

Riley at Dryer’s says his six employees were also involved in every decision when it came to COVID, and that really helped boost everyone’s spirits. “If something good comes out of any of this, maybe it shines a light on supporting your local business, whether that’s a franchise or not, and keeping your community supported,” he says. 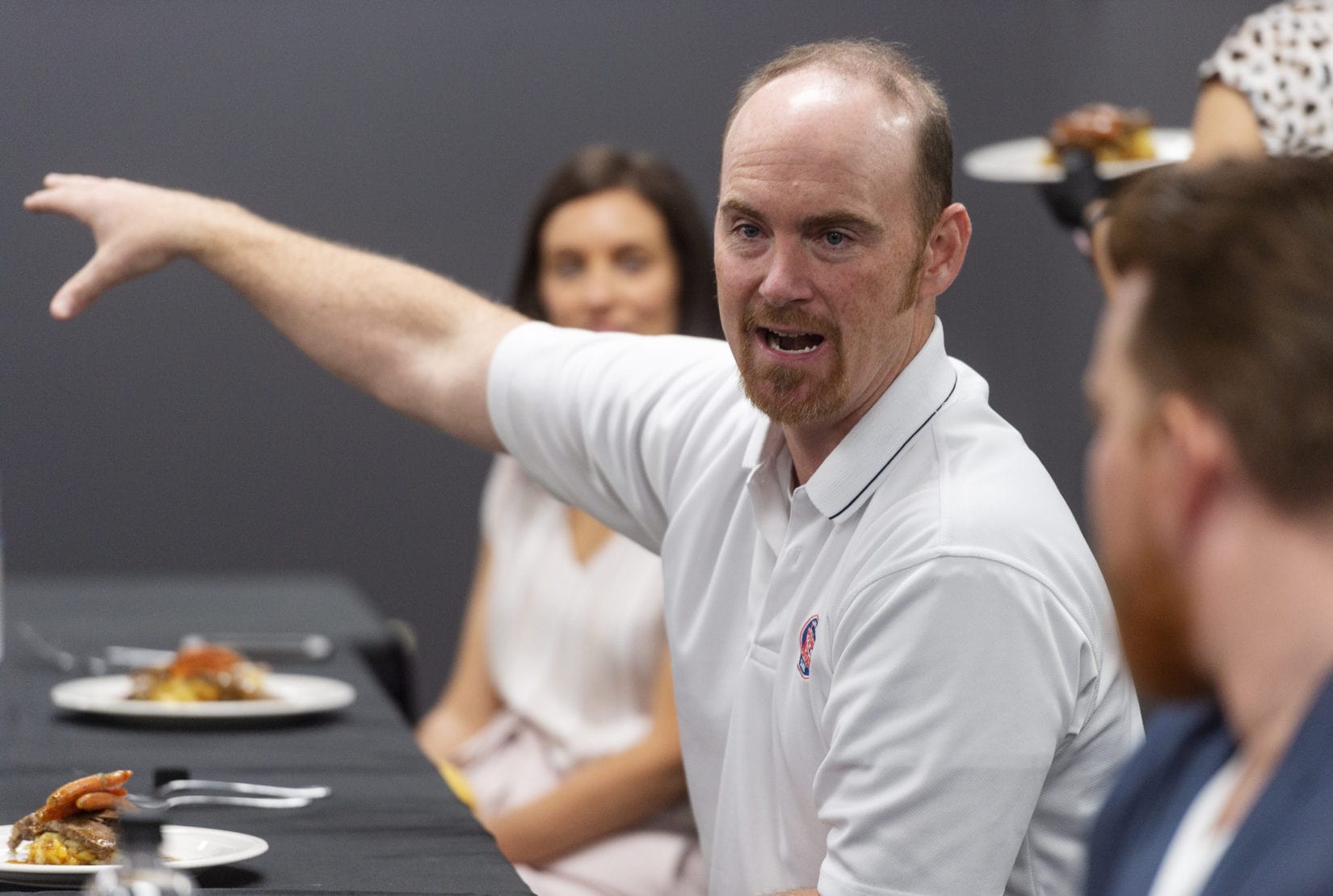 Although community members did step up to help support local businesses, some participants agreed that community leaders, including the health department, could have done a better job helping locally owned businesses. “We had to have a smaller percentage of customers allowed in our business versus big chain stores,” Riley says. “So, it did seem like the guidelines pandered more towards big stores than your local businesses.” Coley agrees that some of the measures taken could have been better. “It seemed like there were a lot of proactive measures taken, but on the back end, it kind of seems like we’re being a little more reactive, and specifically with the Health Department, they need to let us know what the next steps are.” However, he continues, “It’s important for everybody to keep in mind that this is the first time we’ve dealt with this and we’re all trying to figure it out.”

In order to drum up the business they were losing in-store, local business leaders came up with cutting-edge solutions, many of which will be used even in a post-COVID world. Sublett at Jersey Mike’s Subs started delivery nights to small towns around Columbia. “I know a lot of people in those communities, so I would put out a personal post asking who wanted sandwiches for that day,” he says. “We would get 15 or 20 families and you could tell they absolutely loved it. They’d been in their house in a rural town and they’re tired of cooking at home. They’re tired of Casey’s pizza. I know we gained a lot of new customers out of doing that.” Sublett also arranged neighborhood delivery nights as well to places in Columbia, such as The Cascades. For the most part, it was a pretty easy exchange, with people following directions well. “I would show up and I guess it looked sort of like a drug deal going on,” Sublett says. “A sub-deal, I guess.” He says he will likely continue doing delivery nights to towns outside of Columbia, though less frequently, in the future because of the results he saw.

Perhaps a more tech savvy COVID invention would be virtual showings by Realtors. Hopkins says virtual showings did exist before and were beneficial for people relocating to Columbia, but now even those already in Columbia are using the service. “They already have all the documents on the property with them, so if there are certain areas they want to see a little more, I can show them that, the good and the bad,” she says.

Mullette at Culligan says their big innovation was hand washing stations on each service truck. “It’s a five-gallon jug with a hand pump on it that is full of sanitized water along with a spray bottle full of a soap solution for cleansing,” he says. “You won’t believe how many people have called and said, ‘I can’t believe your guy is sitting out in my driveway washing his hands before he puts his gloves on and comes inside.’ I think it has really increased the confidence of the people we serve, and I don’t think we will ever stop.”

Price says overall COVID encouraged her to look at work processes and improve efficiency. “There are a lot of things that COVID took from me,” she says, “but being able to really look at my process and see how it’s affecting the final product has made it more efficient.”

Coley’s began selling family-sized to-go meals. “We just had to get creative,” Coley says. “It was an affordable way to feed a family because you have a lower table price if everyone is eating the same thing.” Their biggest hit? Chicken pot pie. “Other restaurants have a huge online presence and online ordering, and it never really struck me,” he says. “Our food isn’t really made to be delivered, so we had to find packaging that is more take-out friendly.”

Riley definitely relied on his online presence and upped Dryer’s social media during the pandemic. “A lot of people are stuck at home on their devices, and we have a store full of merchandise,” he says. “We really kind of had to keep consistently posting, talking about products. I know a lot of stores were doing live videos, showing and talking about the products. So, you’re basically doing one-on-one sales with your customers about products through social media.”

On Par for Steady Growth