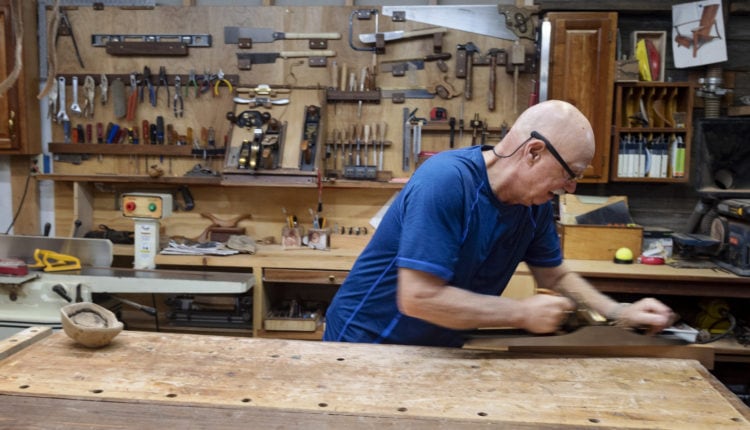 Jeff Glenn Tries His Hand at a Second Career

Starting as a complete amateur six years ago, Jeff Glenn had no tools, no workshop and no background in woodworking. What he did have was a desire to learn how to craft furniture. And that is exactly what he did — out of oak, cherry and walnut. Glenn has progressed, project by project, to become a fledgling professional.

His interest in furniture making is a recent development. He was in his late 60s before becoming a serious woodworker. He now spends about 15 to 20 hours a week in his custom-built basement workshop. The area may be a small part of the condo where he and his wife, Barb, live in south Columbia, but it plays a large part in his life. Glenn takes an unreserved pleasure in all things woodworking and eagerly shows guests his shop and some of his major projects. “I enjoy it all — planning projects, thinking about how I’m going to make something. And then doing it is fun, too,” he says. “I’ll go down to my workshop in the morning, then the next thing I know my wife is calling and telling me it’s time for dinner.” 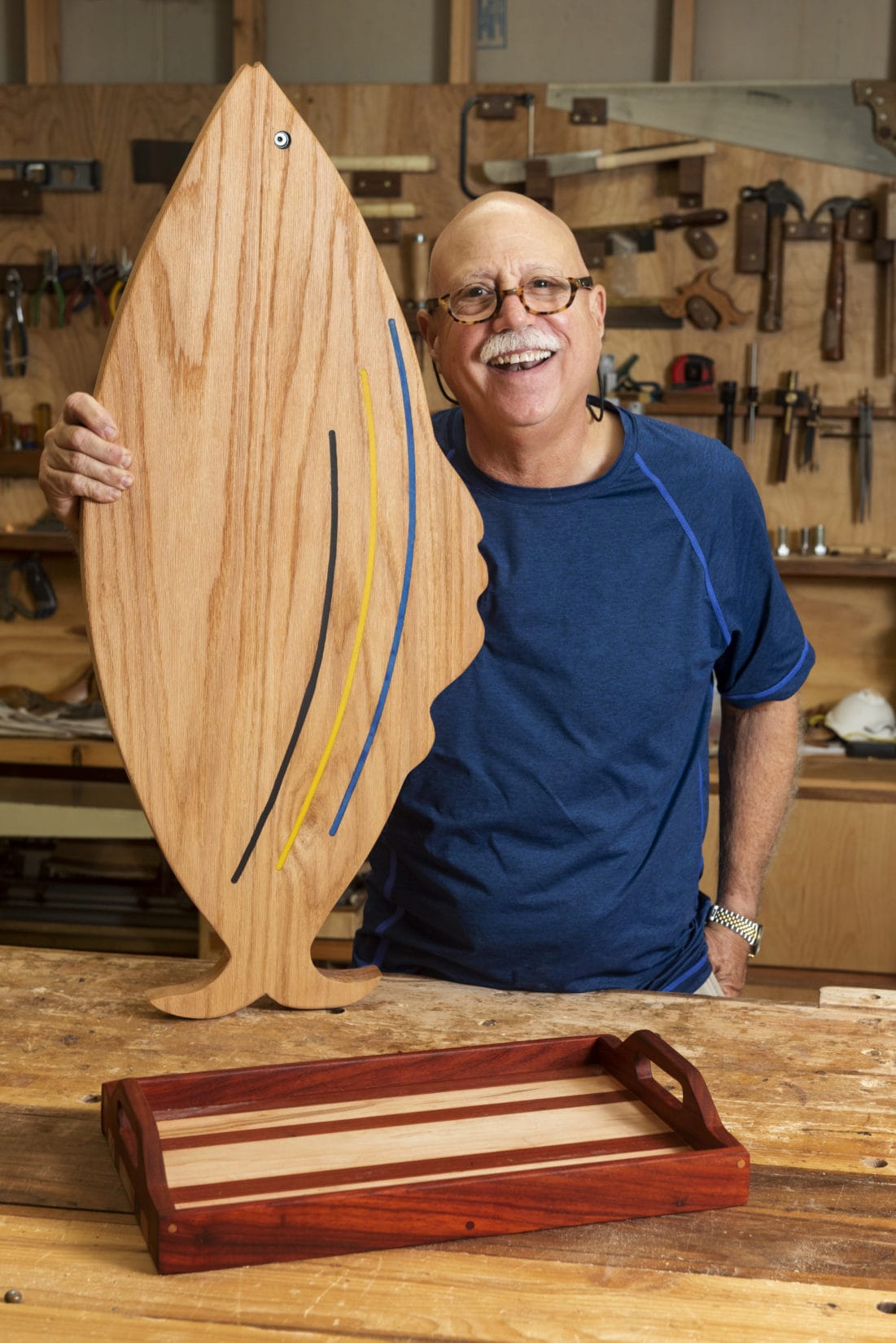 Although most woodworkers stick with simple projects, Glenn prefers challenging himself each time he heads into his workshop. The intellectual challenges associated with woodworking are as much a source of pleasure for Glenn as are the physical problems of measuring, cutting and shaping wood. His level of expertise shows itself in the stylish pieces of furniture that he’s crafted and are now in use throughout his house. Among those are a bed made of rich cherry wood, supported by gracefully curved arches; end tables to match; outdoor furniture, including several Adirondack-like chairs; an oak liquor cabinet; and a live-edged walnut table. He’s currently experimenting with colored epoxy as an inlay for a fish-shaped serving platter.

In addition to making furniture for his own use, he occasionally makes a piece for friends and his children. And in the past few months, he’s begun making some of his smaller pieces — such as cutting boards and napkin cases — available at Tallulahs, under the brand name, Wood-N-You? Mary Stauffer, owner of Tallulahs and a longtime friend of Jeff and Barb, is glad to be an outlet for Jeff’s creativity. “People are impressed by his crafts, and they love that it’s locally made and beautiful,” Stauffer says.

Having a dexterous mind can be more important to a woodworker such as Glenn than having dexterous hands. Self-taught, he learned the basics of how to work with wood by watching YouTube videos and studying woodworking websites. He also had help from Mark Hall, a friend, who has served as his “wood guru.” Starting with only a radial arm saw, Glenn added to his collection of tools and built his own workshop, creating cabinets and tabletops so that he could do large projects in a small area. “Having limited space, I wondered how to set it up, and I used a magazine article as a model, copying the design. Now, it all ties together, working in this small space,” he says.

It takes confidence and commitment to go from zero knowledge about workshops and woodworking to building a complex project. But diving enthusiastically into unknown waters is something Glenn has had a lot of experience with. Although raised in Columbia, he moved 4,000 miles away to Honolulu, where he owned and operated a shoe store. He closed the store to move back to Columbia, where he and Barb bought Missouri Cotton Exchange in 1997. Never mind that he had never stepped foot in a screen-printing shop before. Lack of experience didn’t stand in the way of getting things done. Today, he and Barb own that business plus the Flying Cow Shirt Company. Revenue has tripled since they bought their businesses, and the number of employees has grown to more than 20 people. Glenn is now semi-retired and spends only a few hours a week at the business, but Barb, who is in charge of accounting for the businesses, is at work most days.

Glenn has been a longtime admirer of furniture designed by Thomas Moser. An acclaimed Maine woodworker, Moser designs and oversees production of handmade furniture that includes elements of Shaker, Queen Anne and Pennsylvania Dutch design. By chance, Jeff and Barb were visiting a hand tool company in Maine and wound up having dinner with Moser and his wife. In addition to getting to know one of the nation’s preeminent masters of furniture design, Glenn took home some words of woodworking wisdom. “Moser said that woodworking is a risk. You put all this work into something — sand it, flatten it and put a certain angle on it. Then you get to a point where you have to cut into it and you say, ‘here goes.’ And when you do it and it works, you get a great feeling of satisfaction.”

Woodworking isn’t Glenn’s only interest. A golf cart is parked inches from his back deck that overlooks Country Club of Missouri’s golf course. Keeping his wine cellar stocked and trying new wines is also something he and Barb look forward to. And in pre-Covid-19 days, the couple enjoyed travelling to visit their grown children. But when it comes to getting a sense of achievement, woodworking is his go-to activity. He enjoys the satisfaction of looking at a finished project that started as an idea and ended as a beautiful piece of furniture. “It always surprises me, and I think, ‘did I actually do that?’” he says.