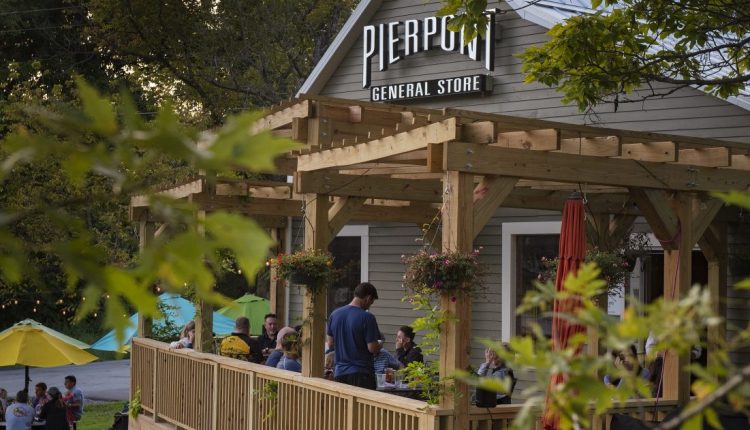 Live music on Saturday nights, picnic tables and a bar made out of repurposed wood and metal are defining characteristics of Jed and Brandy Taylor’s newest addition to Pierpont General Store. Owners since August 2018, the couple hatched plans from the beginning to introduce a café and bar to the historic general store. In order to preserve the authenticity of the century-old store, wood and metal from the original structure were fashioned into the indoor bar space that now occupies a room across from the operating general store.

Outside the Pierpont General Store, tables with umbrellas are now scattered about a patio and in the grass. Music artists including Clayton Hicklin Band and See Rock City play under the open sky for all who come to listen on a Saturday night, which includes neighbors, along with Pierpont picnickers. “We are in the middle of a neighborhood, so it’s kind of fun because they will sit on their front porch and listen,” Brandy says. “We mix up the artists a little bit and some of them come back regularly. We try to find different people that fit us and fit the crowd.” The performances occurred from 7 to 9 p.m. during the summer, but at time of press happen between 6 and 8 p.m. as the sun sets earlier.

Prior to the construction of the café and bar, the Taylors offered grab-and-go sandwiches at the store. However, the menu has expanded with the opening of the new space. Accompanied by Shakespeare’s Pizza, a selection of sandwiches and drinks are available. “We have a Reuben and a gluten-free, vegan sandwich on the menu, too,” Brandy adds. “We continuously change it and mix it up. It’s constantly evolving.”

All food is prepared off-site by Bleu Events due to limited space in the Pierpont Café kitchen. Deliveries on Wednesday and Friday bring in the necessary items, and Pierpont staff cook or bake the foods in their ovens and panini grills on-site. Despite the cozy and modest appearance of the bar with its repurposed stained wood and metal siding, the drink selection leaves nothing to be desired. “We kind of thought we were going to keep it a little more simple, but we ended up with about a full bar,” Brandy says, laughing.

In addition to their stocked bar, On The Rocks pre-made cocktails and beer on tap are also on hand. The selection of On The Rocks cocktails served at Pierpont Café and Bar includes margaritas, old fashioneds, Cosmopolitans and Mai Tais. “They use very good ingredients and pair up with people who are already doing alcohol well,” Brandy explains. “So there is EFFEN vodka in the Cosmopolitan and Knob Creek whiskey in the old fashioned. They are wonderful and super strong, so we warn everybody that it’s a little potent.” Six taps from the inside bar and four taps outside hold local staples Logboat beer and Wave Cider, as well as St. Louis’s 4 Hands beer and classics such as Blue Moon.

In anticipation of cold weather, Brandy plans to incorporate a few features to keep the outdoor seating as functional for as long as possible. “We have the big fire pit here that will help us go further into the season and we’re looking to put up a roof over the deck in the back so at least it’s covered,” Brandy says. “I don’t know that we’ll be able to use the patio all winter, but I think we can get into November for sure.” The indoor bar seating will be put to use once COVID-19 regulations allow.

Although the Taylors were concerned about the Pierpont Café and Bar opening amid the pandemic in March, the new outdoor seating proved to be just what they needed. “We thought we were crazy when the timing worked out that we were opening our bar and café in the middle of COVID, so we almost didn’t do it,” Brandy recalls. “We decided to go through with it and it’s been amazing. It has exceeded our expectations, but is keeping us on our toes for sure!”