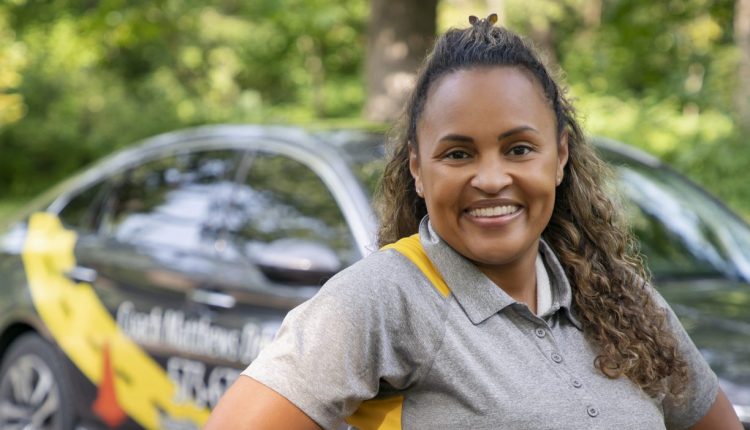 Megan Matthews, known in mid-Missouri as Coach Matthews, likes to help kids drive, whether it’s on the basketball court or behind the wheel. “I’ve been a coach most of my adult life,” she says. The students she coaches aren’t the only ones with drive. She’s a woman who strives for success in all she does. In addition to a full-time job as a driver’s education instructor at Capital City High School in Jefferson City, she aspires for a Ph.D. in education and runs a small business in the evening and on weekends — Coach Matthews Driving School, in Columbia.

Matthews has an extensive background for her work. For 15 years she has taught P.E. and health, topping off her education with an administration certificate, a master’s degree in athletics and secondary education, and additional courses leading to certification for teaching driver’s education. For the past five years she has taught teenagers and adults to drive safely.

Like most entrepreneurs, she has a variety of reasons for working so hard. “I want to give something back to my community, and I’d like to someday hire other teachers to do the instruction,” she says. As well, she’s inspired by her family, knowing that someday her 13-year-old son, Jalen, or 24-year-old daughter, Jordan, might find a place in the business.

It takes a bit more than experience and a coach’s enthusiasm to teach driving. It also takes someone who enjoys what they do and can relate to teens. “I like the immediate feedback I get. One day, I might be teaching someone how to make a left turn, and the next day, they have it down perfectly,” she says. Plus, she takes pride in her students’ success. One teenager had failed his driver’s test two times before his mother called for Matthews’ help. After just two lessons, he passed with flying colors.

Teens and older learners benefit from Matthews’ expertise and her caring personality. Rose Cunningham, who recently moved to Columbia from Manhattan, Kansas, didn’t know where to turn for help in teaching her 16-year-old daughter, Faith, to drive. She found the Coach Matthews Driving School Facebook page and took a chance. “She is so patient, understanding and authentic,” she says. “She’s the best thing we’ve experienced here in Columbia.”

Faith not only perfected her driving with Matthews, but also got a welcoming introduction to Columbia, which is a much larger city than she was used to. Columbia’s heavier traffic and challenging roads made the thought of learning to drive here a stressful one. “Coach Matthews helped me with merging into traffic, and she was so encouraging, telling me how I’d do great in high school,” Faith says.

Some parents dread teaching their children to drive. Some don’t have time. And even those who look forward to the task might be steering their children wrong. “A lot of people have picked up bad driving habits over the years, and their kids will imitate them,” Matthews says.

Advances in car technology are making cars safer, but smart cars don’t do away with the need for new drivers to learn to parallel park. “When you take your driver’s test, they won’t let you use computerized features like that. They even put tape over the rearview camera, requiring you to use your mirrors and the skills you’ve learned.” Matthews says.

Of all the reasons parents bring their children to Matthews, one stands out. On her business Facebook page, Matthews relates an important statistic: one out of five 16-year-olds is involved in an accident in their first year behind the wheel. Taking a driver’s education course doesn’t come with a promise to keep young drivers safe, but as most auto insurance companies agree, it changes the odds in their favor.