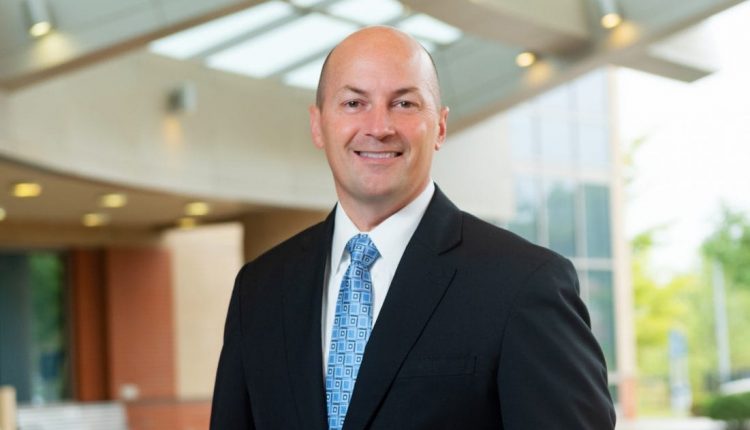 The best time to begin a new position as CEO of a major hospital probably isn’t in the midst of a pandemic. But that didn’t stop Troy Greer from starting work on Sept. 1 as the new CEO of Boone Hospital Center (BHC). Although he’s new to mid-Missouri as well, he already seems comfortable and sure of his and Boone’s place in the medical community.

His communication style is exactly what you’d expect from someone who will be growing the hospital’s network of referring physicians and outlying clinics — professional yet personal. (If he were a doctor, he’d be described as having a good bedside manner.) Asked about his priorities, he says, “I think the first thing you have to do is establish relationships. Even though I have a lot of strategic thoughts on what we can do, I have to get to know the medical staff here first — finding out what their needs and challenges are and how I can assist them.”

When not learning about staff needs in the hospital, Greer is taking part in Zoom meetings or getting out to surrounding counties. He’s made a point of visiting neighboring clinics and meeting referring physicians. “Really, it’s an extension of that relationship piece, focusing on both the internal and external,” he explains.

In the administrative offices of BHC, Greer is wearing a mask, sitting at a conference table that has been marked with red decals indicating social distance spacing that must be followed. “We’re trying to deal with the pandemic while making sure we’re providing the other care our patients need,” he explains. “That’s becoming more normalized. In our early days we had to shut down our ancillary services. Those are returning to us and patients are able to receive care that isn’t COVID-specific.”

Part of Greer’s self-assured manner is based on his 23 years of experience in health care settings and part is based on Boone Hospital’s record of achievements. It was recently recognized by U.S. News and World Reports as the No. 1 hospital in mid-Missouri and one of the top five in the state. But if there’s one thing he’s learned about health care systems is that nothing can be taken for granted. While the pandemic stresses all health care systems, Boone is also undergoing a major transition. On Dec. 31, the lease with BJC Health Care ends and Boone becomes an independent community hospital. That move to independence is a big part of what drew Greer from his most recent position as CEO of Lovelace Medical Center and Heart Hospital in Albuquerque, New Mexico.

“It’s a bold, innovative step,” Greer says. “It shows the trustees’ level of commitment to the community. Something like this goes against the currents of conglomeration, and the excitement means a lot to me.”

The shift to independence should make Boone more competitive and better able to meet community needs. “Being part of a large system is sometimes wonderful, but it may not be as easy to respond as quickly to some challenges. We’ll have our same focus on quality and service, but we’ll be a more agile organization, which allows us to serve the health care needs of the greater Columbia area,” he says.

Greer is looking forward to exploring Columbia as he and his wife become part of the community. His wife, Mandy, will be joining him shortly, while his children, both grown, continue on their paths. He has a son, George, in the Army at Fort Benning, Georgia and a daughter who is a senior at the University of Alabama. “We really do make this move as a family. It’s our job to learn about Columbia and to be good contributors to the community,” he says. Already, he has been impressed with the Columbia Farmers Market, the MKT Trail and the welcome he has received from the area’s faith community.

Although he is 48 years old, Greer has a lifetime worth of experience settling into new communities. As part of an Army family, he moved 11 times before he turned 14. Born in England, he considers himself an Alabamian and started his career at a small rural hospital in Tuscaloosa, before assuming healthcare leadership positions in Florida, Texas and Albuquerque, New Mexico. In addition to a bachelor’s in health care management, he has masters’ degrees in business administration as well as in health management, all from the University of Alabama.

Despite an ongoing pandemic, the transition away from BJC, and an uncertain economy, Greer is calm and optimistic about the future. “We’ve seen a lot of changes in health care and I think at some point it becomes almost the norm that our cycle of change is pretty quick. When you step into an organization that has a reputation for excellence and quality, it gives you a sense of comfort as you move forward,” he says.