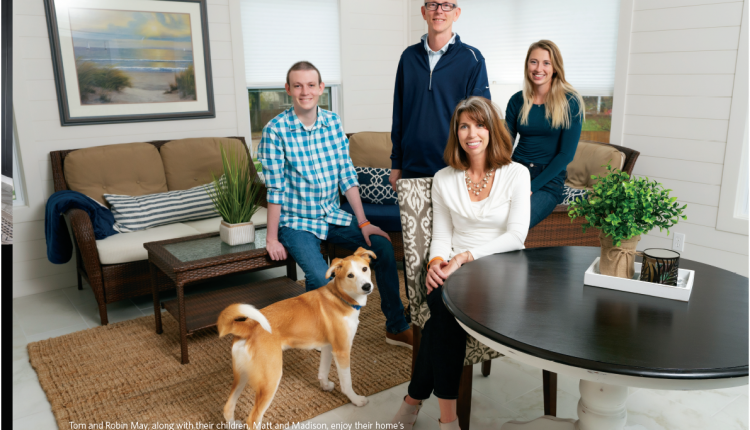 HOMES TELL STORIES ABOUT THE PEOPLE WHO LIVE IN THEM — their struggles and their triumphs. They tell of quiet moments and loud celebrations, of dreams that come to life and others that are lost without warning.

OUR HOUSE — specifically our new addition — tells all this and more. Its story is one of beauty and tragedy, woven into a narrative of cancer and COVID that no one could have predicted.

For years I had dreamed of adding a sunroom to our home. Although our house was built in 2007, the large deck that expanded across the back of the home already needed repairs when we purchased it in 2013. After a couple of failed attempts to power wash and restore the worn-down deck, it was clear it needed to go.

Shocked at the price to replace the existing deck with maintenance-free materials, I began to explore other options. I figured if we were going to spend a significant amount of money for a new deck, now was the time to make my dream come true.

Our home is happiest when it is filled with people. Whether it’s 100 cross — country runners from Rock Bridge High School or 20 young marrieds from our church, we love having it full of activity and laughter. But we also love the quiet of our home and I covet moments spent journaling and writing. I wanted a new space that would create opportunities to fill my soul — both by entertaining and by being still and productive. Thankfully, my husband, Tom, agreed.

“The room evolved from being a screened-in porch to a three seasons room, to ultimately being a four seasons room because we wanted to be able to use it year-round,” he says.

After meeting with several builders over the span of two years, we were excited to choose Hercon Construction to help further refine our dream space and bring it to life. Like me, Hercon Owner Jeff Herigon attended a small, rural school and many years ago, our schools competed against each other in sports. Even though we hadn’t spoken in decades, our familiarity with one another immediately helped build trust and made communicating with one another easy.

“Jeff helped us figure out what we really wanted versus what we thought we wanted by discussing how we would use the room and how we envisioned living in it,” Tom says.

By the end of February, we were finalizing the plans and ready to move forward building a 19-foot by 18-foot four seasons room and attached deck. But none of us saw what was coming next.

BEFORE: Before the addition, twin windows facing the north flanked the fireplace.

AFTER: To keep the height between the existing window and new door level, the Mays added a transom above the door leading to the sunroom. It mimics a similar transom above the front entry door to create design consistency throughout the home.

March brought the beginning of the pandemic and with it, we began to question our sanity in moving forward with the addition. The potential far-reaching and long-enduring impacts of COVID were just beginning to come to light and prompted us to evaluate the implications to our financial security. But eventually, we decided that we had already spent a significant amount of time energy getting a plan and financing in place, and we weren’t turning back from here.

In April, we were challenged to reevaluate this decision when we received the devastating news that our son, Matt, had once again been diagnosed with leukemia. Originally diagnosed when he was 18 years old in 2017, we knew that if his cancer ever relapsed, he would need a stem cell transplant.

Now faced with this reality, we quickly packed up the car and dropped Matt at the front door of the University of Kansas Medical Center. Because of COVID, there was no going with him. No visiting him. No holding his hand to cry and process the news.

Instead, the best we could do is sit in a parking lot across the street from his hospital room. There we would Facetime and wave at one another’s silhouettes.

Although we couldn’t be with Matt during those first 15 days of hospitalization, Tom and I immediately decided we weren’t leaving Kansas City. We wanted to be close to Matt and were determined to have a “home” for him to come to once he was discharged. With the help and generosity of our Columbia community, we found that home and remained committed to living there until Matt could return to Columbia after his recovery from his stem cell transplant.

Meanwhile, as Matt’s treatments continued in Kansas City, so did building the addition in Columbia. Just as Matt’s body was being made new, so was our home.

“Given Matt’s cancer treatments and your family’s situation, there was an added element of responsibility and ensuring all phases progressed smoothly,” Herigon says. “Everyone is busy in the residential construction market right now but as soon as the project’s objective and its unique situation was explained, everyone jumped on board without hesitation and did what was required to meet the project goals.”

After five months in Kansas City, we returned home and realized the space was even more beautiful in person than it was in the photos we had been receiving. Maximizing natural light and clean lines, the large windows, shiplap walls and beadboard ceiling tie in perfectly with the 12- by 24-inch porcelain tile flooring. The 14-foot ceiling opens the entire space, making it feel spacious and connected to the outdoors. The casual décor creates a comfortable space where we can be relaxed and feel at home.

Yet the most beautiful thing about this new space is the hope that lives in it. It is a physical reminder that we are blessed with a lovely home and the gift if today in which to enjoy it. It is a symbol of old things being made new; of tears turning to laughter and of mourning giving way to joy.

Robin May is a former editor of Inside Columbia. To read more of her writings, listen to her podcast or learn more about Matt’s transplant journey, go to www.RobinMayMinistries.com or find her on Facebook.