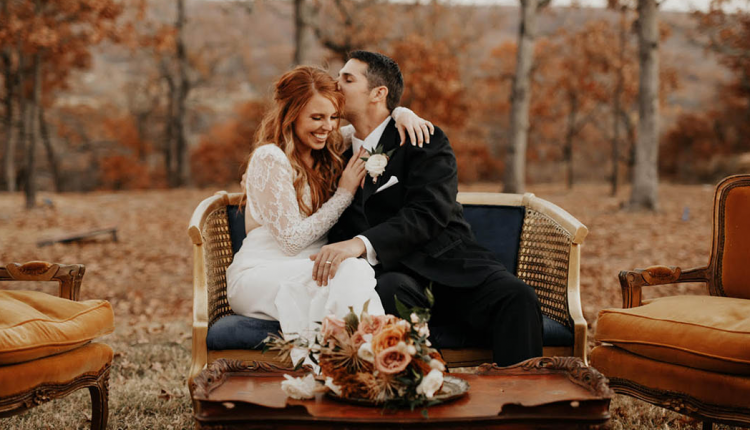 Columbia Couple goes the distance for their dream day.

When Elizabeth Duesenberg and Will DelGrosso were students at Lindenwood College in St. Louis, they were introduced by mutual friends who were dating and wanted another couple to double date with. When Will proposed, he took Elizabeth to the very same spot on campus where they first met. He had asked her mom Pam ahead of time for permission to marry Liz, so Pam was on hand with a camera to capture everything.

Elizabeth, who goes by Liz, knew that she had found “the one.” But when it came to finding a wedding dress that was “the one,” she couldn’t — and ended up buying three!

“The third and final one was PERFECT!” Liz says. It was mostly crepe, while the bust and sleeves were a thicker lace material. The train had a beautiful lace design and she wore a cathedral veil with beaded trim. She accessorized with a dainty necklace and earrings from her mom and two sisters and wore her  hair half up/half down with a braid down the center. 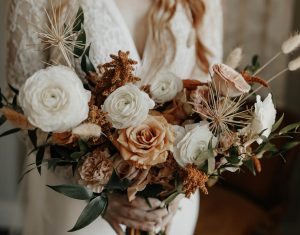 The couple was married on Nov. 7 of 2020, at a venue called Dream Point Ranch in Bixby, Oklahoma. “I really wanted the perfect mix of bohemian and classic, trendy and traditional,” Liz says. “Dream Point has this outdoor ceremony spot that overlooks the Arkansas river.” Because the spot is gorgeous and truly breathtaking, they really didn’t decorate much. One very special touch was an arbor Will designed and built with a friend, out of trees Will cut down, sanded and assembled. Liz helped by staining. The couple brought the arbor with them and decorated it with a huge floral piece in the upright corner. Today, the arbor stands in their garden.

Before the very traditional and religious ceremony, Liz’s mom and sisters gave her away. In a very nontraditional move, Will walked down to meet her to “November Rain.” He admits his choice was “different, but it’s one of my favorite songs and I thought it would be so fun because we got married in November! It just had to be done and I’m so thankful Elizabeth gave me the thumbs up to do it!”

Liz’s Uncle Mike officiated, praying over the couple before marrying them. After exchanging their own vows, a different aunt and uncle (Julie and John) prayed over them, blending part of a prayer from their own wedding with half of an Irish blessing. When Liz and Will were announced as husband and wife, they grabbed their dogs from the bridesmaids and walked them up the aisle. The beloved corgis, Nellie and Dasher, were all dressed up in a white dress and tuxedo that Will’s mom made. 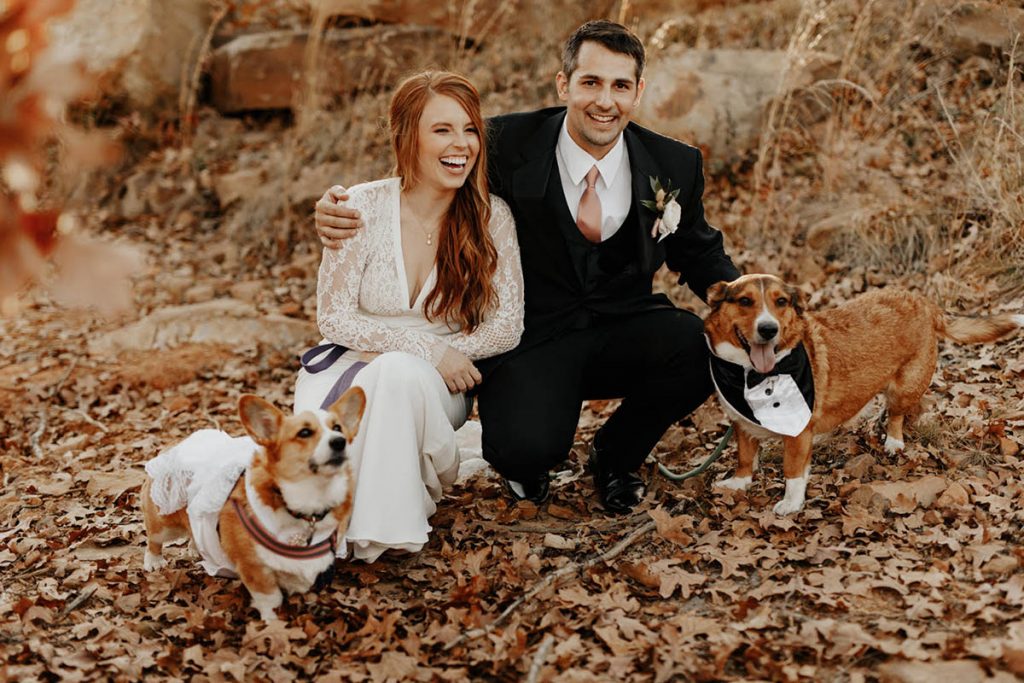 Each bridesmaid wore a different dress, donning a mix of chiffon, satin and velvet that Liz describes as “sunset colors and tones.” 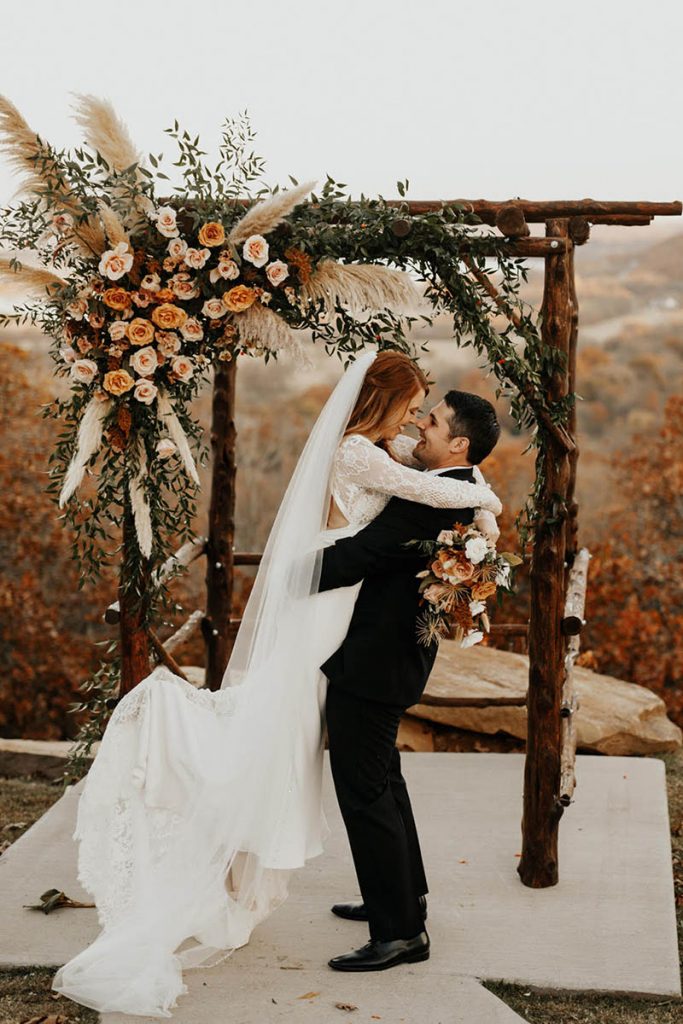 The reception, held indoors at the same venue, featured cream-colored linens with white plates lined in gold. Different framed pictures from the couple’s engagement shoot held the table numbers which were stamped on the glass. Will’s mom had wine bottles made with the couple’s initials etched on them, which fittingly enough read WED.

For Elizabeth, a favorite detail was how family-oriented the day was, including having their “fur babies” take part. “It would have felt like a piece of our hearts were missing if we didn’t,” she says. For Will, a highlight was seeing Liz walk down the aisle. “My best friend of almost a decade was about to become my wife and it was an image I will always cherish.” 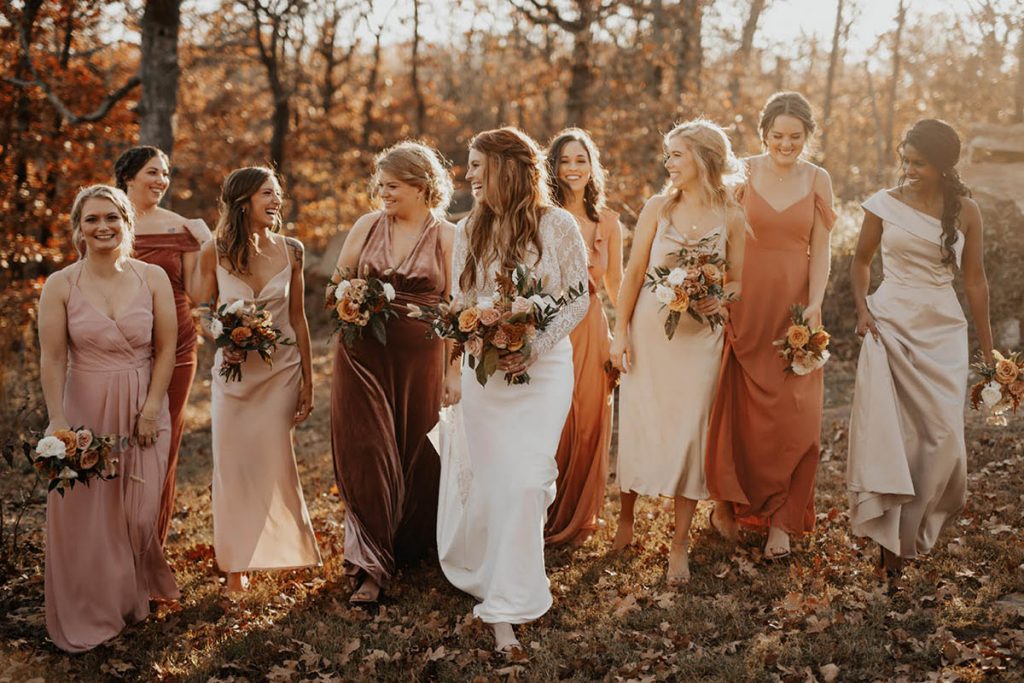 The bride’s mother is Pam Duesenberg of St. Louis. The groom’s parents are Nick and Barbara DelGrosso of Tulsa, Oklahoma.

Due to COVID, the newlyweds had to abandon their grand honeymoon plans, but look forward to a trip to Seattle this summer. The new Mr. and Mrs. DelGrosso live in Columbia where Liz is co-host of “Liz and Scotty in the Morning” on Clear 99, and Will is an accounting assistant at Stephens College.