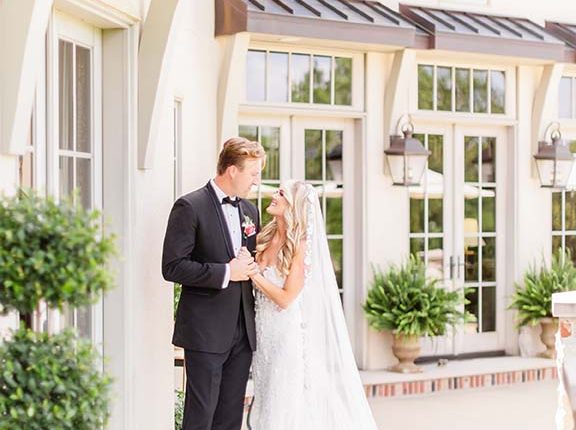 You could say that after spotting Taryn Cadle, John Miles was a bit squirrely. According to their “how we met” story, John and his friend Case  — one of John’s groomsmen — ate breakfast together at Dobbs Hall on MU’s campus every morning before class back in 2011.

According to Taryn, Case could often be found scouting the ladies, while John could be found admiring the squirrels. One late October morning, an attractive blonde with a ginormous hair bump caught John’s eye. “Who is that?” he asked Case. “That’s Taryn, she’s a Golden Girl and  Tri Delt,” Case replied. “Wanna go meet her?” The two walked over, introductions were made, and John never looked at those squirrels again. He was nuts about Taryn.

The couple got engaged over Homecoming weekend in 2019. “Mizzou’s always held a special place in our hearts,” Taryn says, “and John proposed that Friday on the Quad.” He assembled all their family and friends for a surprise engagement party at the atrium.

The couple married on July 24 at Missouri United Methodist Church. The honorable Kevin Crane, a long-time family friend of the groom, presided. 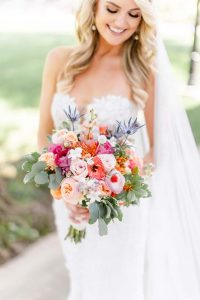 The  religious ceremony was filled with people from the couple’s “village,” who played key parts. John’s brother-in-law, Tyler Jenkins, who knew Taryn since the day she and John started dating, spoke. Taryn’s soon to be sister-in-law, Chelsea Sinjem, and groomsman Jordan Bley, both read bible verses. And John’s cousin, Turner Staton, a professional opera singer, performed.

She accessorized with Kate and Mari “Ashley Earrings,” and a diamond tennis bracelet from the couple’s dear friend and Buchroeders’ designer, Sara Sarno.Taryn jokes her hair had “Lots of volume and curls, back to my Golden Girl days!”

She carried a brightly colored, hand-tied bouquet of blush garden roses, periwinkle thistle, lavender stock, ranunculus ranging from pink to coral to raspberry, fuchsia mokara orchids, orange pincushion protea, purple gomphrena, white stephanotis and pink freesia. The bridesmaids carried smaller versions of the bride’s bouquet, minus the thistle and stephanotis. Those were reserved for only the bride’s bouquet and groom’s boutonniere. The bright bridesmaid’s bouquets stood out from their different styles of navy crepe Amsale dresses.

The groom and his groomsmen wore tuxedos from the French Laundry.

When it came to church decor, the couple felt that between the vaulted ceiling and stained glass windows, the church’s chapel was stunning on its own, so they added only a few floral arrangements.

In keeping with the bride’s favorite color, blue, the reception at the Country Club of Missouri featured periwinkle striped table linens and coordinating napkins. Huge arrangements of limelight hydrangeas (grown in the groom’s mother’s garden) were featured prominently.

A boxwood “wall” was used to hold the table cards under a light-up “Miles” sign. The groom’s grandmother, Deanna Spray, a talented local artist and accomplished needle pointer, scribed every guest table card in beautiful calligraphy.

Edith Hall made the three-tier traditional wedding cake. “We somehow convinced her to come out of retirement, and so glad she did!” Taryn says. 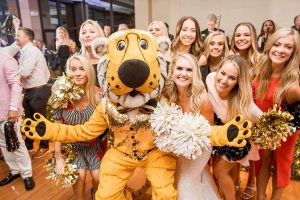 For the couple, one of the most memorable moments, other than “saying I do,” was the fireworks show with music curated by groomsman Chris Volpo: “It was a magical moment and we loved looking back at our guests illuminated by the firework’s light,” the groom says.

After the fireworks, Truman the Tiger made an appearance and joined Taryn and her former Golden Girl teammates to fittingly perform “Eye of the Tiger!”

The bride’s parents are Roxanne and Galen Cadle of Eden Prairie, Minnesota. The groom’s parents are Dr. John Miles and Heidi Miles of Columbia.

The newlyweds honeymooned in Puerto Vallarta, Mexico for a week, and now reside in Kansas City, Missouri.

The bride works for PSG, a private equity firm headquartered in Boston. The groom  spends the majority of his time running his family’s funeral home business throughout the greater Kansas City metro area, and also works as an insurance producer with Centennial General Agency out of Columbia.