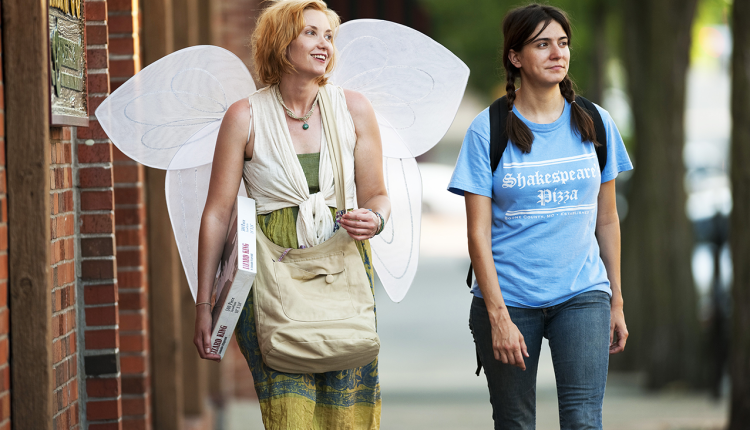 Columbia Is A Big Fish In National "Small Pond" Movie

In the opening scene of “Small Pond,” a full-length movie, a young woman wakes up groggy, wearing her pajamas, an oversized T-shirt. As she shakes off her slumber and hangover, she seems indifferent to the young, slovenly man who obviously spent the night with her. “Last night was awesome,” gushes the guy. “We’ve got to do this again sometime.” 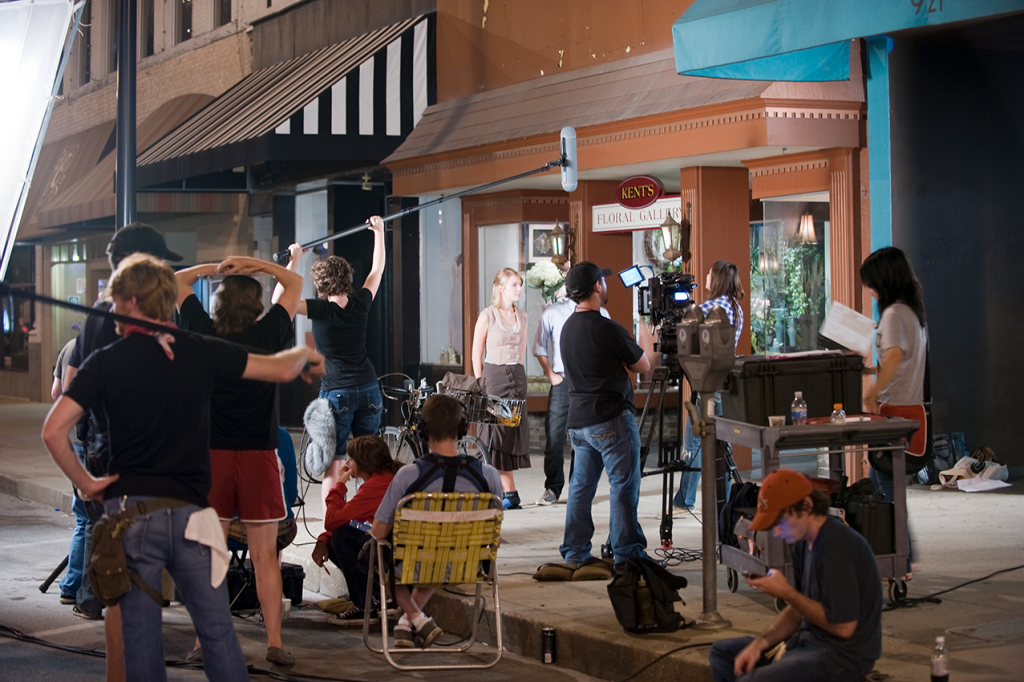 The young woman mumbles and gets out of bed, pulling a fresh tee over her head. “Going to work?” the guy asks. The young woman ignores him, and as she makes her quick exit from the scene — and probably his life — she turns toward the camera. In that instant, the writing and logo on her light blue tee becomes readable and the location of the scene becomes unmistakable. It’s a Shakespeare’s Pizza shirt — and she is definitely in Columbia.

Columbians who watch “Small Pond” (available for rent or purchase on iTunes and Amazon) will get a double treat. First, it’s an engaging movie — kind of grungy and offbeat. The film industry thought enough of this independent film to present it the Programmers Award at the 2011 Sidewalk Film Festival, held in Birmingham,
Alabama. Regardless of how film professionals rate the movie, Columbians will enjoy catching glimpses of their hometown in just about every scene. Filmed back in 2009, it’s clearly a work of fiction, but it’s about our very real town as much as it is about the characters. In addition to familiar local landmarks, there’s a cameo by one of mid-Missouri’s celebrities. In a bar scene, a younger Carl Edwards masterfully tosses off his one-line contribution to the movie — “That’s three strikes, captain,” he says in his role as a bouncer at McNally’s Irish Pub. 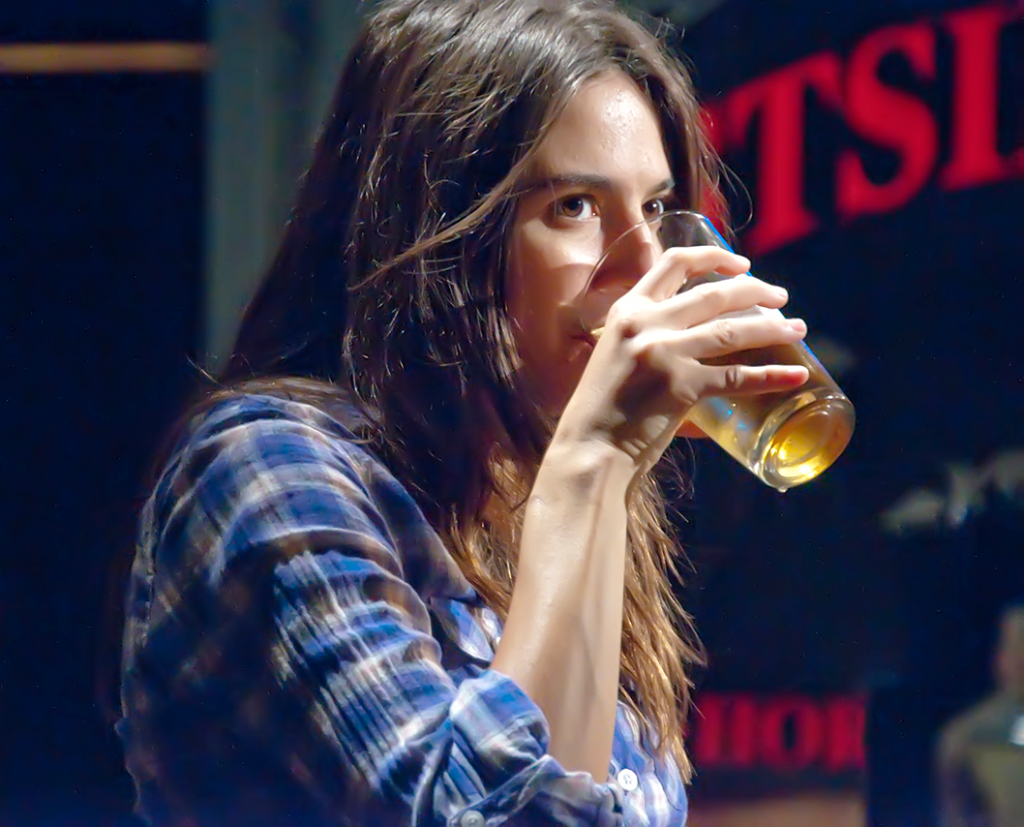 The Columbia that the movie portrays is a slice of summer life as experienced by young adults not quite sure of who they are and not quite ready to commit to the adult world of 9-to-5 work. Although the characters are having trouble finding their identities, Columbia viewers will have no trouble identifying the local landmarks that make up the background. Among the most obvious are Shakespeare’s Pizza, Ernie’s Café and Steak House, the water tower off Walnut Street, downtown Columbia, the limestone wall in front of the Calvary Episcopal Church, Patricia’s Grocery on the eastside of town (now a Moser’s) and the flying french fries sculpture outside the Boone County Public Library. The 2009 summer in Columbia vibe wouldn’t be complete without the main character, Kirsten, watching videotapes of old “Pepper and Friends” shows.

The effect of viewing a movie that takes place in your hometown is a bit like a déjà vu experience. It’s a doubletake situation, one that feels familiar yet novel, simultaneously. David Wilson, filmmaker and cofounder of the Ragtag Film Society and the True/False Film Festival, describes “Small Pond’s” relationship to Columbia in this way: “In addition to telling a fictional story, the movie also delivers a real-life time capsule of the moment.” 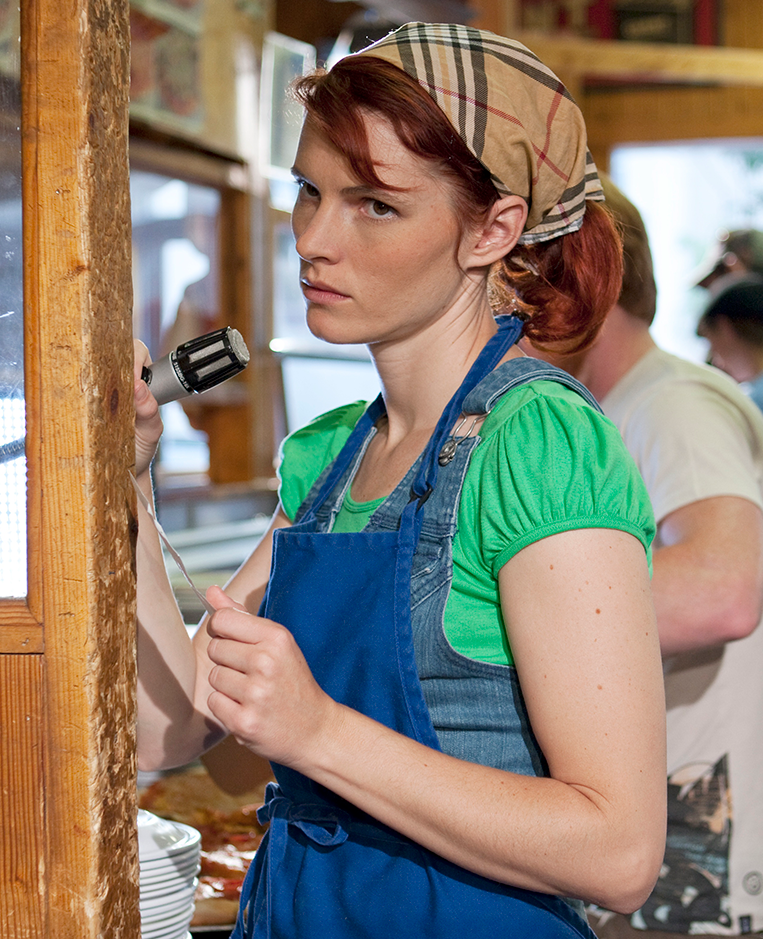 “Small Pond” was the brainchild of filmmaker Josh Slates. He produced it with then-Columbian Kim Sherman; co-wrote it with Kirsten Straub and directed it himself. Slates, who was raised in Columbia and now lives in Baltimore, has since gone on to take a prominent place among the film crews of blockbuster movies and Emmy-winning TV series. Slates does most of his work as a location manager, the movie professional who scouts the nation for just the right place for a scene, then coordinates production logistics. Occasionally, Slates serves as a cinematographer, editor and writer of short features.

He’s as much a part of the film industry as it is a part of him. He’s worked on productions that have become woven into global pop culture — movies, such as “Captain America: The Winter Soldier;” “The Dark Knight Rises;” “Transformers: Dark of the Moon;” and “He’s Just Not That Into You.” Among his television credits are his location work on “Veep” and “House of Cards.”

When preparing to shoot “Small Pond,” Slates brought in professionals to play the main characters, but he used locals for small parts and as extras. One of those Columbians who had a supporting role in the movie was Jay Sparks. Today, Sparks is the entrepreneurship coordinator for Regional Economic Development Inc. (REDI). But 12 years ago, he was working at McNally’s Irish Pub as a bartender when he got to know Slates. It turned out that McNally’s would become a perfect location for one of the movie’s key scenes and Sparks would be typecast, playing the familiar role of bartender.

Sparks wasn’t a newcomer to the film world. He had been involved in Columbia’s 48-Hour Film Competition as well as CAT TV’s “One Night Stand”, which gave aspiring local filmmakers 24 hours to make a movie. Acting in “Small Pond” was fun for him as well as for a lot of other Columbians. Part of what made the movie meaningful to him was gaining an insight into Slates’ vision. “I loved seeing Josh’s mental direction as it evolved. It had all the indie vibes of the town in the summer.”

When the shooting of the movie ended, the relationships of the film crew and actors didn’t. “I enjoyed getting to know Josh, and we became friends and still see each other. The movie holds a special place in my life,” Sparks says.

There’s really no such thing as being “just” an extra in the film business. Being part of a movie can have a long-term impact on everyone participating in the film. “It makes lasting memories for the people involved,” Wilson says. “We’re talking about the world of low-budget filmmaking, which is clearly a labor of love, and I think it’s really important and valuable for everybody involved. People come together because making a movie is always hard and means long hours of work. It’s sort of like an improbable accomplishment. Just getting a movie done is a really big deal.”

The storyline to “Small Pond” revolves around the life of Kirsten, a young (maybe in her late 20s) woman who can’t catch a break. Her life is a bummer. She doesn’t like her roommate; has no goals; no future; is bored with her job at Shakespeare’s and is always broke. She also has a drinking problem and seems to have substituted beer for water as her main source of hydration. She is offered a better job at Shakespeare’s, as bartender — one that would provide health insurance as a benefit — but passes it up. One night, she is doing “whippets,” which is a dangerous way of getting high by inhaling nitrous oxide (laughing gas). In a moment of haste, the frigid nitrous oxide fuses Kirsten’s face to the stainless steel “whippet” canister and the results are disastrous. She is left with a horrible gash and her friend gets her to the emergency room late at night. Unfortunately, the hospital won’t accept her credit card. Afraid of being billed, Kirsten and her friend drive off without getting any help. They manage to staunch the bleeding with Kleenex, leaving Kirsten with mummy-like facial bandages that leave her unable to speak clearly until she heals. Too self-conscious to work at Shakespeare’s, she quits and pins her hopes for the future on traveling with a band and tending to the merchandise table.

Hari Leigh, the actress who played Kirsten, is still in the film industry, based in Los Angeles where she directs actors playing roles in video games. “I am still acting and writing my own projects whenever I get the chance,” she says. She remembers Columbia fondly.

“My co-stars and I had a great time at all the local haunts and found everyone to be really warm and friendly.” The only bad things she recalls are the Midwest humidity and having fake blood made of corn syrup on her face. The corn syrup seemed to attract mosquitos.

The Columbia of 2009 has long since faded as a memory, but its impact on the fictional lives of a group of young people coming of age then has been preserved in “Small Pond.” It’s definitely worth revisiting this time and place, as well as this movie. “It is one of those curious oddities that if you live in Columbia long enough you find these little things worth investigating,” Sparks says. “It’s almost more interesting that this movie is not well known, then discovering it for yourself.”

How “Small Pond” Was Conceived And The Youth It Portrays

I grew up in Columbia and graduated from Hickman High School in 1994. My family was living on an unpaved stretch of Vawter School Road that is probably more bustling these days.

I enrolled in film school at Rochester Institute of Technology in Rochester, New York, because honestly, I was excited to wind 16mm Bolex cameras and make inscrutable avant-garde films. I’m currently working as a location scout in Baltimore, Maryland.

The rarest gift is to direct a movie that you have conceived from scratch with some of your best friends. Producing that movie on location in Columbia with Kim Sherman during the summer of 2009 is still the craziest thing that I’ve ever done. We were all completely out of our minds!

The whole thing kind of started as a screenplay fragment from Dean Stover’s Write to Publish class at Hickman High School. It was maybe six or seven pages of this bored young woman wrapping up her shift at Shakespeare’s and wandering around an empty downtown Columbia in the dead of night. To me, that sounded like the most amazing thing at the time.

One thing we all really wanted to strive for was to create this simultaneous element of timelessness and anachronism. The character of Kirsten has to go to Daniel Boone Regional Library to check her email, but she’s lost her cordless phone and stealing the newspaper from her next-door neighbor’s lawn. Is this the early ’90s or the late ’70s or even today? It doesn’t really matter. Whenever I revisit “Small Pond,” it’s like I’m watching a documentary about that moment and that summer. It’s like revisiting our youth. 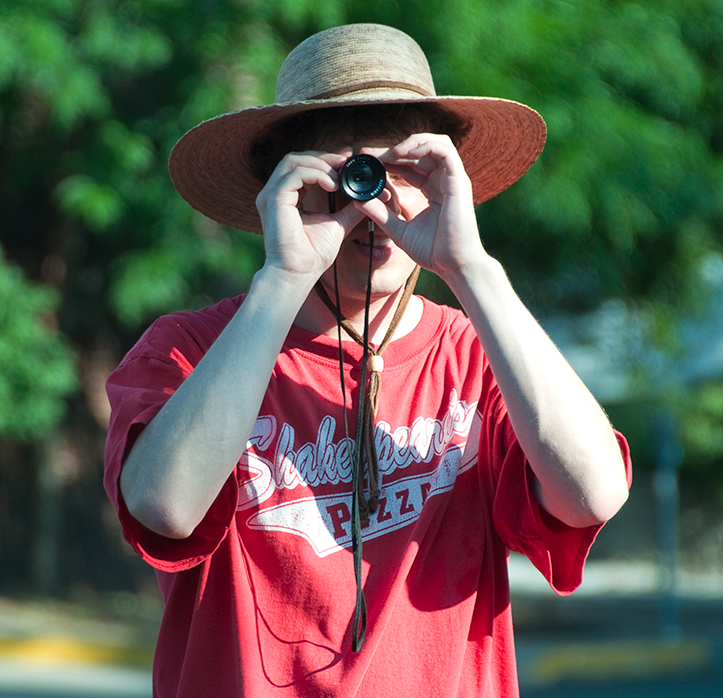 This movie never would have happened without the incredible generosity of Jay Lewis and Kurt Mirtsching. Why on earth did they ever allow us to film at the downtown Shakespeare’s headquarters? They begged us over and over to consider filming at one of their satellite locations but it was essential to tie Shakespeare’s pizza to the rest of Columbia’s weird nighttime downtown world.

I definitely credit our producer Kim Sherman for rallying the Shakespeare’s crew. The cast even attended a Shakespeare’s Boot Camp where they were schooled in all of the essentials. But the only way to make it work was to film outside of regular hours: midnight to 7 a.m., or then 4 a.m. until the dough machines started up at 9 a.m. It was miserable but fulfilling.

Trends and fashion may come and go but McNally’s remains a reassuring constant. I also have some unreasonable nostalgia because I fondly recall when it was a Godfather’s Pizza way back when. My friends and I wasted most of our teenage years watching ridiculous movies on VHS tapes and then wandering over to their endless buffet on 6th Street.

Location scouting is just about the most incredible job anyone can have in the film or television industry. I wake up every day and I never know where I’m going or what I will see or who I will meet. Never a dull moment.

Thank you, Columbia, for the memories.
Josh Slates