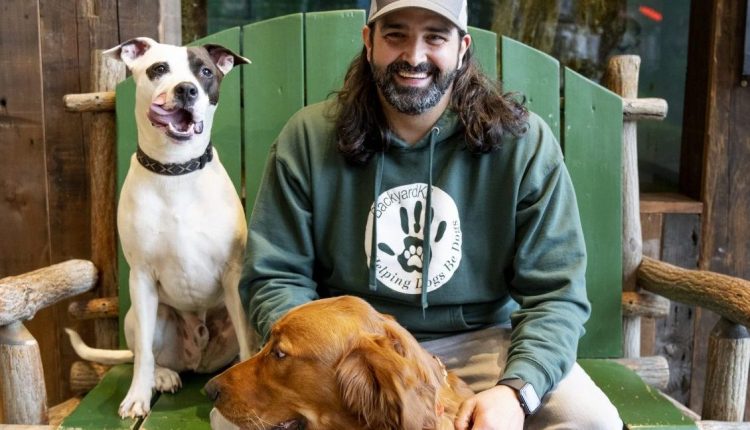 The owner and lead trainer for Backyard K9 had grown up with dogs and certainly been around them, but he never really trained them or sought them out. In fact, the path to founding Backyard K9 had quite a few bumps.

Dawson is a Columbia native but he left the area years ago and substance abuse issues led to his being incarcerated. He ultimately spent time in 27 different jails across 12 states, returning to Columbia in 2013. But his substance abuse continued, and he was incarcerated with the Missouri Department of Corrections, where he began his work with dogs.

While at Algoa Correctional Center in Jefferson City, Dawson decided to apply for the Puppies for Parole program, which gives offenders the opportunity to become trainers to rescue dogs. And though he didn’t expect it, he found a real purpose, ultimately becoming the lead dog trainer for the Algoa program. “A lot of these dogs, this is their second, third, fourth chance, and that’s what’s so special about Puppies for Parole. It’s not only a dog that’s working with an inmate, but it’s the inmate that’s working with a dog. A lot of these guys have never had that unconditional love that a dog supplies. It just gives people a purpose,” Dawson says. “These dogs are basically unadoptable … and our job was just to kind of make these dogs adoptable, and just produce a really socialized, good dog.”

On Christmas Day 2019, Dawson was released from the Department of Corrections. He returned to Columbia, where he applied at In2Action, a local organization that provides transitional and recovery support for those released from prison or at risk of incarceration. “I didn’t know what I was going to do,” he recalls. “For the first time in my life, I wasn’t weighed down by addiction.” He went to his new bed and sat down with his Bible, but he was quickly and quietly joined by the house dog, Jobe, who stayed with Dawson through the night. “I knew the next day that I was right where I was supposed to be.” 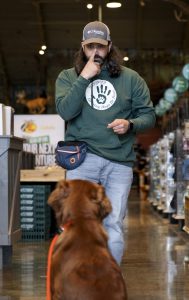 Dawson began to take Jobe to a local dog park, where he would talk to other people and give tips on how to train their dogs. Soon enough, people were encouraging him to start a formal dog training business, and Backyard K9 was born. Dawson says the key to training is really training owners in how to properly communicate with their dogs. Dogs need exercise, discipline and attention in order to thrive, he says, and he helps guide dog owners in giving their animals confidence. “Backyard K9 is here for the dogs,” Dawson says. “It’s not just a training session. It’s a lifetime commitment.”

The business itself has now grown to include two other trainers, Mike Montagna, who assists in Columbia, and Danny Ramsey, who has taken Backyard K9 to the Lake of the Ozarks. Both Montagna and Ramsey are former lead trainers with the Puppies for Parole program, just like Dawson, who emphasizes how important they are to the business and its continued success.

Dawson doesn’t have a physical business location, instead training in a variety of places, from area dog parks to businesses that have agreed to allow him to train on site, such as Bass Pro Shops and Home Depot.

In addition to Backyard K9, Dawson works as activities coordinator for In2Action and as a peer specialist at Burrell Behavioral Health. He relishes any opportunity to give back and to help others, crediting his success to his relationship with Christ, his church and In2Action, among other local organizations that provided support.