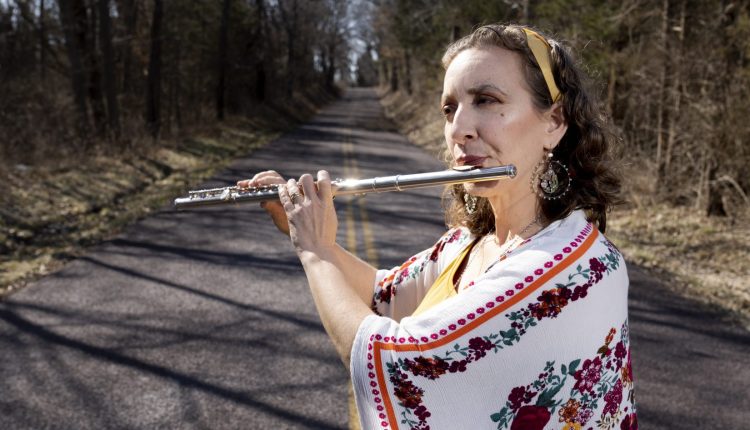 With summer comes vacation, which for some can mean loading up the car with suitcases and snacks, and hitting the road with loved ones. Local author Kathleen Basi’s debut novel, A Song for the Road, tells the story of an unconventional cross-country road trip that becomes a journey of discovery. After all, she says, a road trip is never just about the destination.

A Song for the Road follows Miriam, a recently widowed mother who lost her husband and twin teenagers in a drunk driving accident one year ago. She tries to stay occupied in her job as a choral director, but her days have become monotonous, the grieving is unbearable, and she knows that change is imminent. When going through her daughter’s room to begin taking inventory of all that was left behind, Miriam finds a flip- a-coin road trip app that her children had created for her and her husband to take upon becoming empty nesters. In search of answers and adventure, and in hopes of honoring her family, she takes a road trip across the country. But no road trip is complete without obstacles, twists and turns, and Miriam faces her fair share, both external and internal.

The book can be described as women’s fiction, upmarket fiction or book club fiction. Basi says she realizes that the story sounds like it could be very depressing as the main character struggles to deal with such heartbreaking losses. “I had to think carefully about how to keep it from becoming so heavy that it couldn’t bear the weight of human interaction,” Basi says. “It needed a lightness to it in order to find a readership.” Basi says she also knew she couldn’t write a book about a woman traveling across the country alone, which helped lead her to create the character of Dicey, a young, pregnant hitchhiker who travels across the country with Miriam.

Basi says she was shocked at the positive reaction to her book, which was released in May 2021. She worried about who would purchase a book about a dead family in the middle of a global pandemic when everyone was worried about losing their own families. “I was surprised because it turned out that it was exactly the right time for this book. We were sensitized to how important our families were because we were
cut off from (our extended families) in many cases,” Basi says, adding that these types of stories help remind us of how precious the gift of family and love is. Family is something everyone really needs when there’s a lot of stress, like during a pandemic, she says.

Outside of writing, Basi is a church choral director, which is similar to the career of Miriam. The banter, jokes and things that happen at choir practice in the novel are things that Basi has experienced herself. But outside of that, Basi and Miriam are completely different people. “Characters interestingly develop their own reality. A character morphs into their own person throughout the revision process, and that’s a really fun part of the revision process. It’s like they become real people,” Basi says. Miriam struggles with things Basi’s never had to struggle with, but a lack of experience doesn’t mean a lack of empathy or understanding. “I wanted to highlight some of those things in the hope that it would illuminate the human experience for other people,” she says.

Writing A Song for the Road required careful planning, as Basi wanted the road trip to make sense and match up with real locations. The first landmark she decided on was the Cahokia Mounds in Collinsville, Illinois. “I spread out a big AAA map of the United States and did a Google search for places to see and then started putting sticky tabs all over the map. I wanted to highlight really cool but less obvious places,” Basi says. “I narrowed the list down by figuring out a route that could be done in six to eight hours of driving between stops because that was about all I thought was realistic.”

She also used a website called Roadside America, which is described as an online guide to offbeat tourist attractions. Basi says this site delivered the UFO viewing platform in Hooper, Colorado, and the High Trestle Trail Bridge in Iowa as well. But she also visited some of the landmarks in person when possible. “Anything I felt like we could drive and go see, we did — so I visited the Cincinnati waterfront, Cahokia, Hannibal and the Iowa trail.”

A Song for the Road is available locally at Skylark Bookshop and Barnes and Noble.

Bugging Out: 5 Unique Species Found at the Enns Entomology Museum