Book Signing for “From Melon Fields to Moon Rocks,” the story of Charles W. Gehrke, founder of ABC Labs 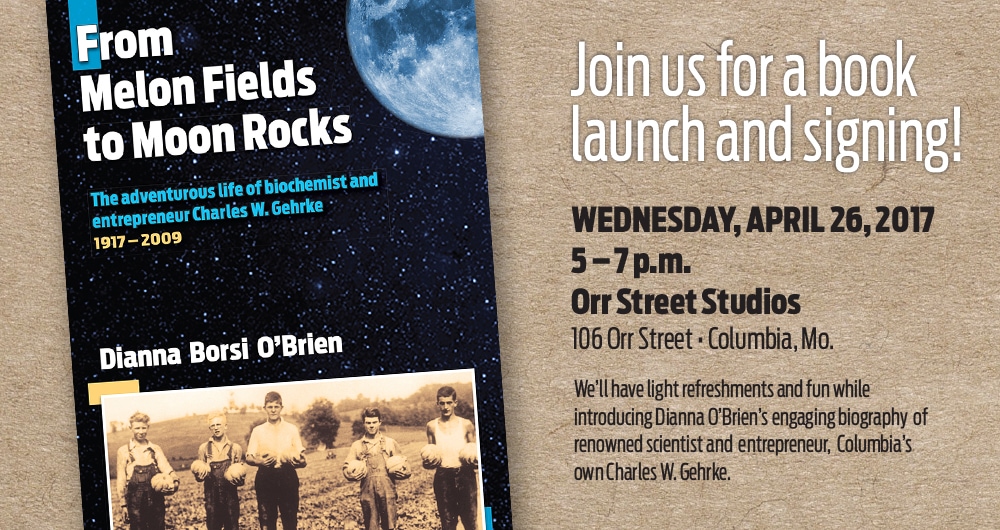 A book signing/launch party for a book about the life of the late Charles W. Gehrke is set for 5 to 7 p.m. Wednesday, April 26 in Orr Street Studios.

The book is “From Melon Fields to Moon Rocks,” and is a rags-to-riches story.

Another celebratory event will be held 5 to 7 p.m. on June 22 in the Boone County Historical Society.

Gehrke was an MU professor who was tapped to analyze the moon rocks brought back from the 1969-1974 Apollo missions and in 1968, he founded ABC Labs, which went on to employ about 300 people before it was bought out in 2015 by EAG Laboratories.

The book is more than poor-boy-makes-good story. As John Bucksath, former ABC Labs president and CEO said, “In this biography, his family life, work and career are all laid before us, in a work that is accurate, concise, revealing the ‘chemistry’ that made this man special.”

This biography gives readers an inside view of a man who had planned on staying home to help support his German immigrant mother, until his brother insisted on putting him on a train to Ohio State University. The book also shows how as an MU biochemistry professor, Gehrke wasn’t sure about becoming an entrepreneur, even though a scientific instruments firm suggested that he do just that, until he asked two of his former graduate students if they were interested. Once he had their enthusiastic approval, Gehrke did what he did best and managed to get friends and family members to open their wallets to collect $200,000 within six months, an amount worth $1.4 million in 2016 dollars.

The book also reveals Gehrke’s other traits like his stubborn insistence on running the show, which would lead to the near demise of what he often called his other child, ABC Labs – and, for a time, the loss of his friendship with one of his former students and fellow founder of the company.

In many cases, poverty-to-success stories come at a price, a cost in personality, damaged marriages and families – but not in Gehrke’s case. He and his wife were set to celebrate their 65th anniversary the day she died. Less than three months later, his son and daughter began seeking out a writer to help their father finally write the book he’d been threatening to write all his life, the story about how he’d left the small hamlet of Canal Lewisville near Coshocton, Ohio where he’d had to work in melon fields to help support his single mother and his four siblings and gone on to be reach the top of his profession.

The author, Dianna Borsi O’Brien, has a master’s degree from the MU School of Journalism and has been a freelance writer since 2003. She is also an adjunct instructor at the School of Journalism. Her work has appeared in national trade magazines such as Package Design and Smart Meetings. For more information, see diannaobrien.com.

The Lamb Who Would Be King