Skylark Bookshop is thrilled to present Romalyn Tilghman as she reads from and discusses her richly rewarding first novel, To the Stars Through Difficulties, which was a Kansas Notable Book

Skylark Bookshop is thrilled to present Romalyn Tilghman as she reads from and discusses her richly rewarding first novel, To the Stars Through Difficulties, which was a Kansas Notable Book of the Year in 2018.

Andrew Carnegie funded fifty-nine public libraries in Kansas in the early 20th century–but it was frontier women who organized waffle suppers, minstrel shows, and women’s baseball games to buy books to fill them. Now, a century later, Angelina returns to her father’s hometown of New Hope to complete her dissertation on the Carnegie libraries, just as Traci and Gayle arrive in town–Traci as an artist-in-residence at the renovated Carnegie Arts Center and Gayle as a refugee whose neighboring town, Prairie Hill, has just been destroyed by a tornado. The discovery of an old journal inspires the women to create a library and arts center as the first act of rebuilding Prairie Hill after the tornado. As they work together to raise money for the center, Traci reveals her enormous heart, Angelina discovers that problem-solving is more valuable than her PhD, and Gayle demonstrates that courage is not about waiting out a storm but building a future. Full of Kansas history–from pioneer homesteaders to Carrie Nation to orphan trains–To the Stars through Difficulties is a contemporary story of women changing their world, and finding their own voices, powers, and self-esteem in the process.

Straight out of graduate school, native Kansan Romalyn Tilghman was hired as Executive Director of the Association of Community Arts Councils of Kansas and was lucky enough to work with rural arts councils throughout the state. She saw first-hand how groups of (mostly) women encouraged culture on the Plains. From there, she went on to work for the National Endowment for the Arts as Regional Representative, eventually serving a territory that stretched over the Dateline, over the Equator, and over the Arctic Circle. For more than twenty years, she has worked as a freelance consultant in the arts – conducting strategic planning, initiating audience engagement projects, and assessing grant programs for nonprofit organizations, government agencies, and private foundations. She has served on the boards of Americans for the Arts, Association of California Symphony Orchestras, and Western Arts Alliance, as well as on numerous national panels. She lives in Long Beach, California. To the Stars through Difficulties is her first novel. 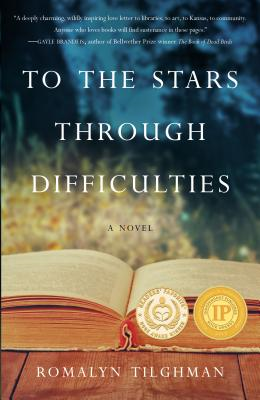