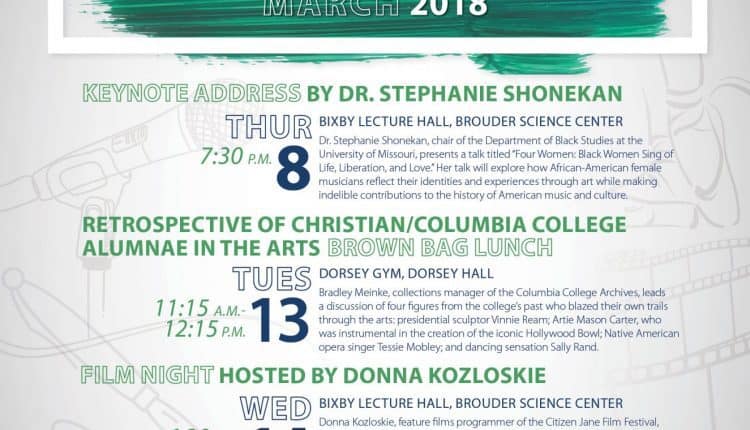 March is national Women’s History Month, and Columbia College has a series of events to celebrate the occasion.

The theme for this year’s programming is “Taking Center Stage: Celebrating Women who Create and Inspire,” highlighting the integral role women play in the arts. The month’s two main events are an art installation by Columbia College and University of Missouri alumna Valerie Wedel and a keynote lecture from Dr. Stephanie Shonekan, chair of the Department of Black Studies at the University of Missouri.

Shonekan’s talk, titled “Four Women: Black Women Sing of Life, Liberation, and Love,” will be held on Thursday, March 8 at 7:30 p.m., in the Bixby Lecture Hall in Columbia College’s Brouder Science Center. Her presentation delves into how African-American female musicians reflect their identities and experiences through art while making indelible contributions to the history of American music and culture.

Wedel, who earned her bachelor’s degree in painting and drawing from Columbia College before going on to earn her master’s in sculpture from the University of Missouri, has created a large-scale art piece in the Atkins-Holman Student Commons on campus that will be on display for the entire month of March. Wedel’s installation features colored cords and voile fabric forms hanging from the second-floor catwalk in the commons, continuing the theme of creating immersive experiences for the audience that she exhibits in her body of work.