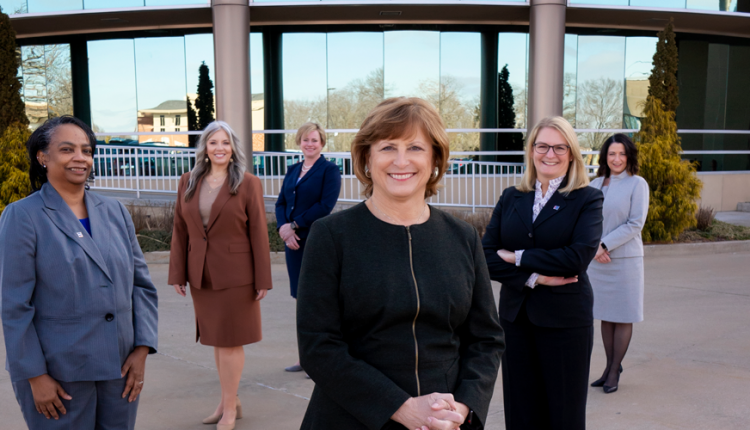 Randa Rawlins didn’t intend to make history, but she did. This past January, Rawlins became the 13th president of Shelter Mutual Insurance Company, the first female president in 75 years. In July, when current CEO Matt Moore retires, she will assume the title of president and CEO.

Her status as the first female to lead the company is nowhere near the top of her mind or the main way she defines herself. “I didn’t set out to work at Shelter with the idea of being the first woman general counsel or first woman executive vice president or first woman president. That’s not what I’m about. I came in with the idea that I had something to offer, and that I wanted to make this a better place to work for myself and others,” she says.

Still, the significance of her status isn’t lost on her. “I try to balance the fact that this just isn’t about me. I know it means a lot to many people to see that the company recognizes your efforts regardless of your gender,” she says.

Rawlins is quick to point out that being a woman isn’t reason enough to land a position or to advance with Shelter. “I feel like we have given opportunities to many people in this company based on their work, skills and efforts — not on what they looked like,” she says.

Rawlins is definitely not the new kid on the Shelter block. She has been with the company since 2002, getting her start as general counsel. Before moving to Columbia, she spent 20 years as an insurance defense attorney in private practice in Kansas City. She grew up on her family’s farm, outside of the small northeast Missouri town of Hale. Her mother was in charge of the family’s dairy operation and her father took care of the row crops as well as doing some custom farming. Rawlins attributes her work ethic to her home environment, where her parents raised four children in addition to running their farm. “My parents worked harder than anybody I’ve ever known,” she says.

Since the pandemic, Rawlins and her husband, Blaine Einspahr, have been able to spend more time on the farm, which she is now part-owner of. It’s a relaxing place for her and Blaine, where she can work remotely or take a break and mow the lawn. The couple enjoy golfing together and have been able to take a few get-away trips to break the monotony of the limited travel that Covid-19 has ushered in.

In pre-pandemic days, Rawlins enjoyed some international travel, helping with construction projects on church mission trips. Closer to home, she sits on the boards of the Columbia Airport Advisory, the Missouri Innovation Center and REDI. “I enjoy getting out and meeting people in the community who are working for better things for us, and Shelter has always done a very good job of supporting that,” she says. As a graduate of what was then known as Northeast Missouri State University, Rawlins has since served on the governing board of Truman State and on its foundation. 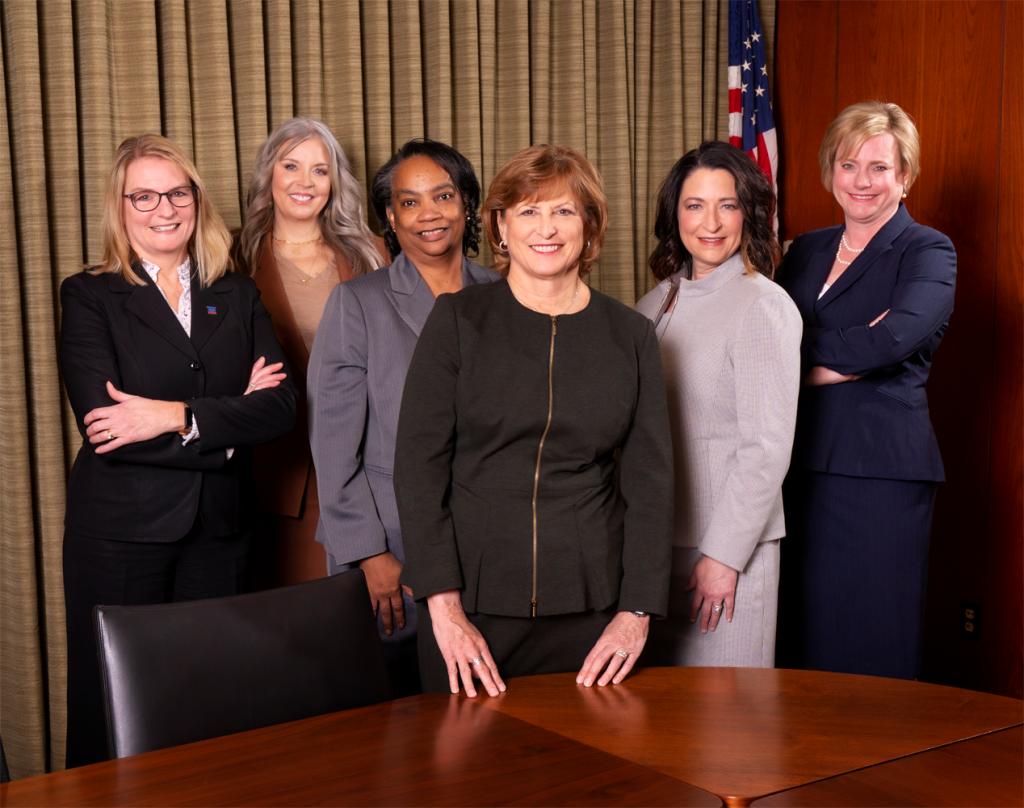 Rawlins, like the other 1,200 employees who work at Shelter’s Columbia headquarters, has had to find ways of weathering the pandemic while conducting the company’s business. Most of the time, she works from her office, in a building that now seems almost deserted. Only about 150 employees are at their desks at any one time. “Although some of them come in for part of the day, then leave, the pandemic means that people are required to run our business from their kitchen tables or their basements, or in whatever space at home they’ve figured out will work,” she says. And as for marketing reps, travel is no longer a feature of their jobs. The challenges of selling and servicing insurance during a pandemic means that a problem-solving approach to every obstacle is a necessity. “We’ve had to figure out whether we can do it, how can we do it, and can we do it better,” says Rawlins.

Part of doing things better means relying on others. Rawlins appreciates the expertise of those who she works with. “I can’t know everything there is to know about the insurance business. There are a lot of people in this building who know a lot more about certain areas than I do,” she says.

Stacye Smith, vice president of human resources, has been on the Shelter management team for the past 16 years and has worked with Rawlins since her training days in 2000. “One of the things I noticed about her, right off the bat, is that you always know where you stand with her. She’s very direct and confident but has the knowledge to back it up,” she says.

Rawlins combines her direct approach with a low-key and personable style of interacting with others. Teresa Magruder, Shelter’s executive vice president says, “When I think of Randa, I think of her calm demeanor and her consistency, even when topics are challenging and can be emotional.” 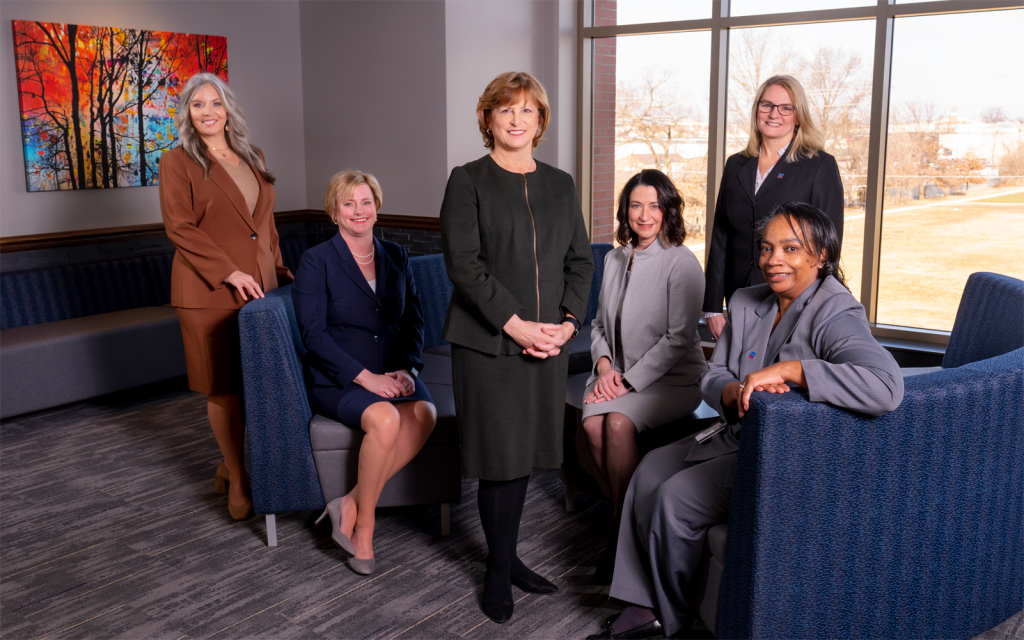 For everyone in the insurance industry, keeping up with the latest technology is a continual challenge, one key to a profitable future. Rawlins looks forward to leading Shelter through whatever changes new technology requires. “People can now buy their insurance online, if they prefer,” Rawlins says. “Some want to shop and buy online. Others want to shop online then buy from an agent in person.”

Shelter seems to have no problem implementing new technologies and keeping up with the competition. Over the years, typewriters morphed into computers, computers linked into networks, then networks linked to the Internet. From their modest start in Missouri, the company eventually expanded to 13 states. Now they are in 21 and are classified as a super-regional company.

Becoming Shelter’s first female president and CEO wasn’t a goal of Rawlins, but her new position is a recognition of her 19 years of steady and sure leadership. Behind that leadership is a deceptively simple philosophy that has guided her: “Be true to yourself,” she says, “and make sure you are taking advantages of opportunities. But sometimes, it’s up to you to make those opportunities for yourself.”