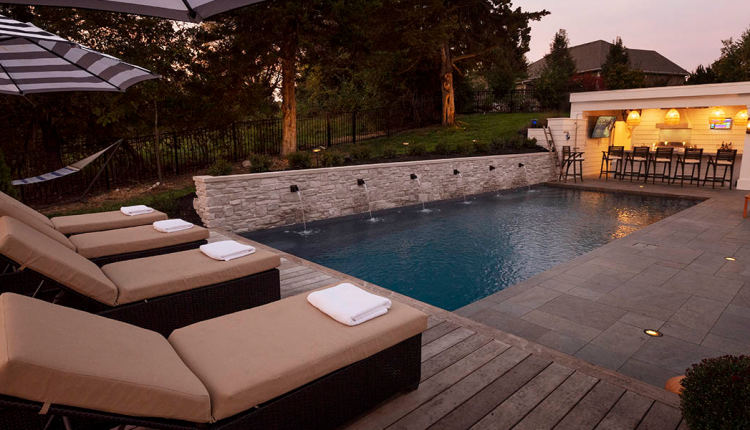 This outdoor entertaining oasis has it all.

Jeremy Spillman readily admits that early last year, when his family first floated the idea of putting in a pool, it held zero appeal. He didn’t want the maintenance hassles or upkeep costs. Nor was he eager to spend money on something he knew, from his experience as a builder, would add little, if anything to the resale value. But that was all pre-pandemic.

Once COVID hit, it took away his favorite pastime of traveling. It also closed the family’s neighborhood pool. Left high and dry, Spillman revisited the prospect of adding a  pool to his property. He discovered advances in technology had greatly improved pool pump and heater efficiency. Beyond that, he realized he could create a sanctuary and “pseudo” spa/resort where his family and friends could make memories until travel become feasible again — and well beyond.

Going into the project he had a good idea of what he wanted but says it evolved as he began laying it out. He approached the pool the same way as any of his new builds or renovations. “I started dissecting details on pools in any picture I could find,” he says. “I spent hours and hours until I had a deep understanding of what can change it from feeling like the Bellagio for example, or a basic pool, versus a more swanky modern boutique vibe that I wanted.”

Once Spillman realized which details would give him the clean look he was after, he started drawing and pricing everything out. This included getting custom-made coping (the defining edge around the pool) as opposed to the normal bullnose you see on coping. He says it’s a combination of small details such as that which make the pool area feel the way it does.

One of his biggest challenges was working with a backyard that had a 16-inch elevation change in a very small footprint. “I felt like what it must feel like adding a pool in the middle of Broadway downtown with no space to stage anything,” he jokes. He knew that with such an elevation change, a wall on the pool was a must. He liked that idea for two reasons: The wall would serve as a jumping feature (without increasing his homeowners insurance the way a diving board would) and it would be the perfect place to add cascading water. “I really wanted to hear the sound of a waterfall,” Spillman explains. The aesthetics of the space and the tranquil waterfall sound were must-haves for the family, Spillman says, since they plan to operate it almost all year. “There is no better place to read a book,” he says. “Some days I work from the outside bar and listen to it in the background. It’s a huge piece of the overall ambience.”

He also determined that by doing an earth contact structure — just like a reverse walkout basement — he could do a 9-foot foundation wall and hide it with the pool house. This would give them more space, dodge engineering fees, and even better — create space for a bathroom next to the pool. “Everyone who had a pool preached how miserable it was to walk into a cold house slopping water everywhere to use the restroom,” he says. The idea evolved to a pump house and an outdoor bar and kitchen. “I really just took my own advice I give my clients if we are doing an addition,” he says. “‘Let’s make it count while the man power is there, as there is no other time you will do it as cost effectively and then you only live through it once.’” 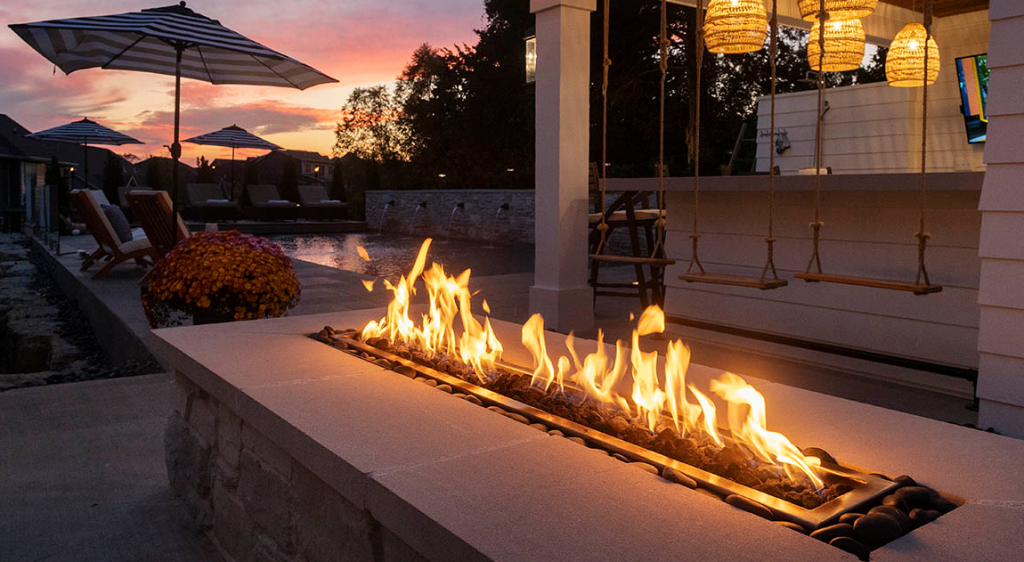 He designed the firepit so that it’s at your back when sitting at the bar, and a radiant heater in the bar’s ceiling allows heat to encapsulate you on a brisk day. “I just couldn’t wrap my head around making an investment like this and only getting four months a year. For the extra investment, to gain at least three to four additional months made it so worth it!”

The family swam late into the fall last year, and won’t drain or cover the pool, outside of a solar cover when heating it for use. They plan to resume swimming again next month.