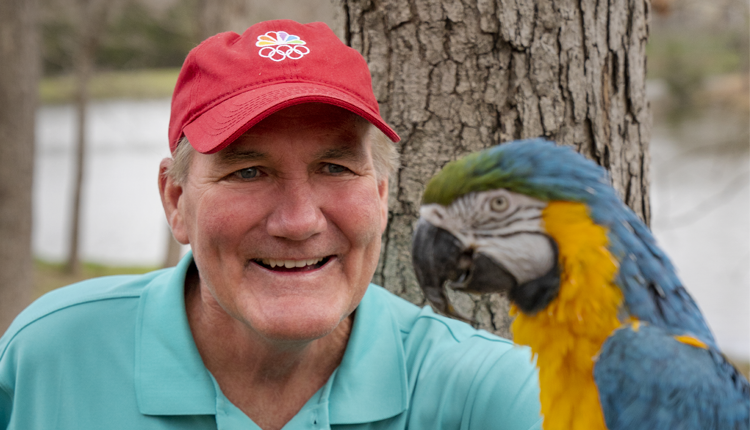 Off-Screen But On-Track for Retirement Adventures

Jim Riek has vanished from the KOMU newscast. More likely than not, wherever he is at this moment, there’s a broad smile on his face, reflecting his good-natured approach to life. He’s probably on a golf course or with a friend. Certainly, he’s sharing a story or two. After 23 years of anchoring and reporting at KOMU-TV, Riek’s smile, his face and his calm demeanor are recognized by most mid-Missourians. Dressed in blue jeans and wearing a red baseball cap with an NBC logo, he has a fresh, newly retired look. Free from the daily routine of work, he is ready for whatever comes next.

More than ready. He’s watched all the episodes of “Going RV”, dreaming of the day he buys a 24-foot motorhome of his own. In his imagination, he can picture himself in the driver’s seat, his pet macaw, Skipper, perched next to him in a padded cage that protects the bird should he stop suddenly. They are headed down the highway, maybe to Kitty Hawk, North Carolina, or to Montana to visit the site of Custer’s Last Stand, or maybe to the Great Smoky Mountains — all places on Riek’s list of sites to see.

Macaws are known for their playful personalities, their language skills and their sociability. Skipper and Riek are a good match, sharing some of the same traits. Except that Skipper hasn’t progressed beyond his limited vocabulary, and Riek — after 45 years of communicating with audiences — is a practiced and enthusiastic storyteller. Not only has he used stories to bond with thousands of KOMU viewers, but he also has the rare knack of bonding with strangers almost instantly. He is guileless, with a personality that is an open book, which he gladly shares. Some people start a conversation with “How’s the weather?” Riek might start with a story about the time he and a news crew were chasing a tornado and barely missed being swept up by the twister. 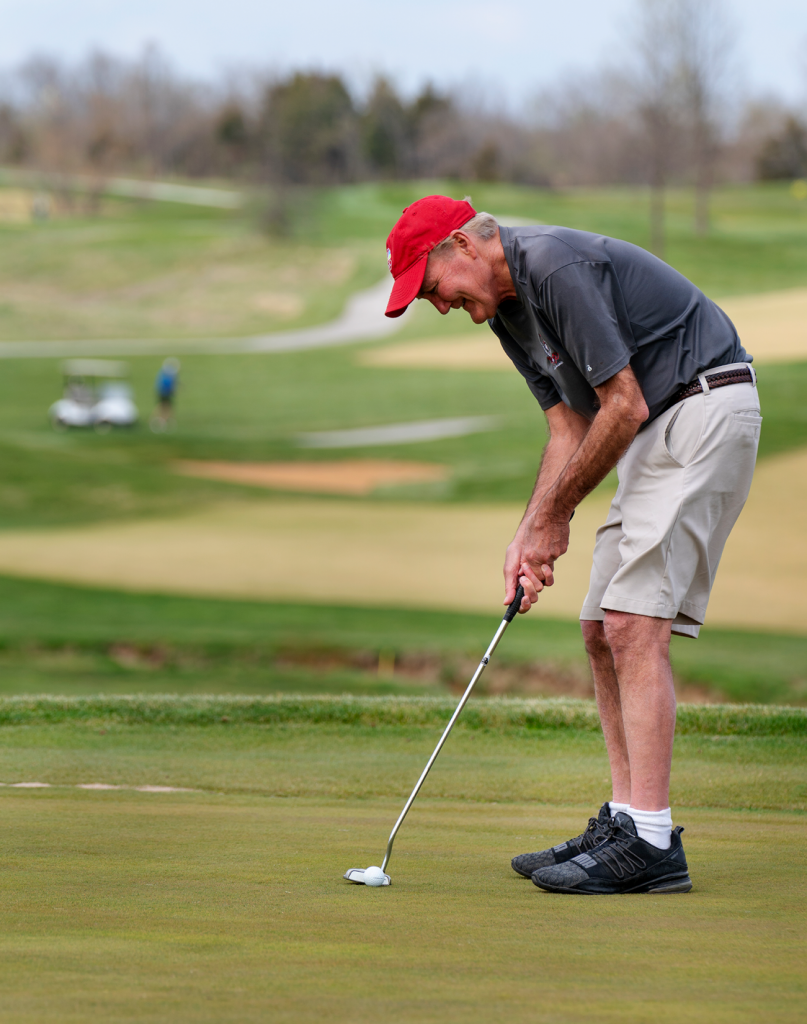 He lives with his blue-and-gold feathered friend a few miles outside of Fulton on a small acreage in a large house. Since his wife’s passing last June, Riek has lived alone but not in isolation. He’s close to his family — two daughters, a son and two grandsons, all of whom were in the KOMU studio with him during his final newscast. And then, there are his many friends and golfing buddies. Riek is nothing, if not sociable. After decades of interviewing hundreds, probably thousands, of people from all walks of life, he has perfected an easygoing style of interacting with others.

Looking back on his broadcasting career, Riek is a bit astonished that he was paid to do exactly what he loved. “I had the luxury over 23-and-a-half years of covering what I wanted to, whether it was for ratings or something dear to me that I wanted to cover,” he says.

He has travelled to all Missouri’s 114 counties, except for Worth. And among his favorite interviews were those with politicians and well-known public figures whom he caught up with in his “Where Are They Now” series. Among his favorite in that series were segments with Wendell Bailey, Walkin’ Joe

Teasdale, and Governor Jay Nixon. “It was a blast,” he says

And then there were the people of Joplin. Riek has a special relationship with Joplin, partly because he went to college there and partly because of his coverage of the May 22, 2011, tornado and Joplin’s recovery. In the aftermath of that tornado, Riek made a total of 48 roundtrips from Columbia, reporting on the immense damage and the community’s struggle to recover from it. Michelle Bogowith, KOMU’s meteorologist at the time (and now with WDAF-TV in Kansas City), made most of those trips with Riek. Their coverage and the documentary film they made won state and national awards, including the Society of Professional Journalists’ documentary of the year. Together they wrote a book about covering the story, donating all the profits to the recovery effort.

“Getting to know him on all those trips was really fun. I love the guy,” says Bogowith. “He is the most genuine, down-to-earth person who I’ve worked with in the TV business. He deeply cared about the people of Joplin and the stories we were covering.” 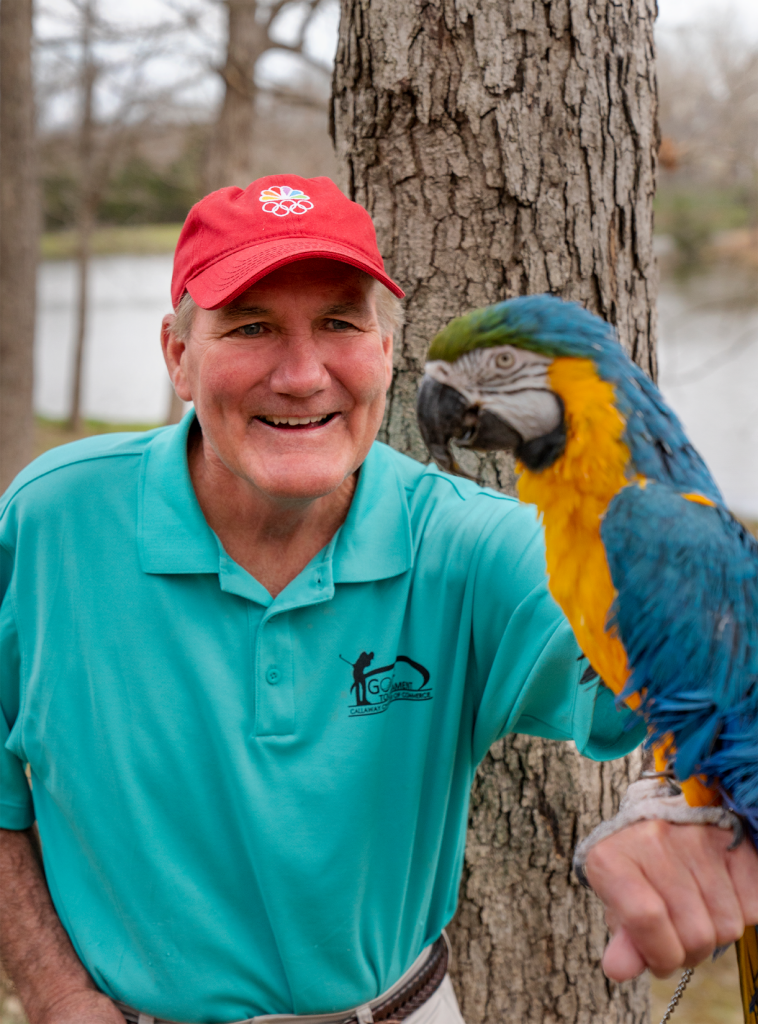 Working at KOMU is unlike work at any other TV station. Each semester a new crew of student reporters enters the newsroom. “Although the students change, the philosophy behind the news doesn’t,” Riek says. In addition to his work at the station, he also taught a class each semester on sports reporting. The principles of solid, community journalism and storytelling are the same today as they were when Riek entered the profession. But what has changed is the technology and the level of expertise of fledgling journalists at the station. Large, heavy video cameras have given way to iPhones and compact high-definition cameras. “The students are learning to do everything — write for the web, shoot videos and write for radio as well as for TV. These Channel 8ers are getting jobs right out of college in major markets, like Kansas City and Dallas,” he says.

Supervising and teaching student journalists required good humor as well as a good dose of patience. As anchor, Riek proofread each story two or three times before going on the air, sometimes rewriting in his own words. Although he was respectful of students, there were some things that got under his skin. “I don’t like certain words,” he says. “’Official,’ is one of them. I’ve never seen a name tag that says, ‘I am an official.’” Another word on his list of inexact, local words is “local.”

But it’s more than having the right words that makes for a great news anchor. A key skill Riek perfected is one that was never obvious. “There were newscasts that were about to go really bad. I could feel the lug nuts coming off, and I always tried to be the glue that held things together. If the viewers don’t realize how the newscast is about to go really, really bad, you’re doing a good job,” he says.

Riek hasn’t been on a news set since the day he retired. If the weather is pleasant, he’s probably on the fairway, playing golf. He loves the game and can recall every stroke of a favorite game he played when he was in his prime, 10 years ago. Shawn Brazas, a good friend of Riek’s, occasionally joins him on the golf course. Their friendship is based on more than the enjoyment of a round of golf. 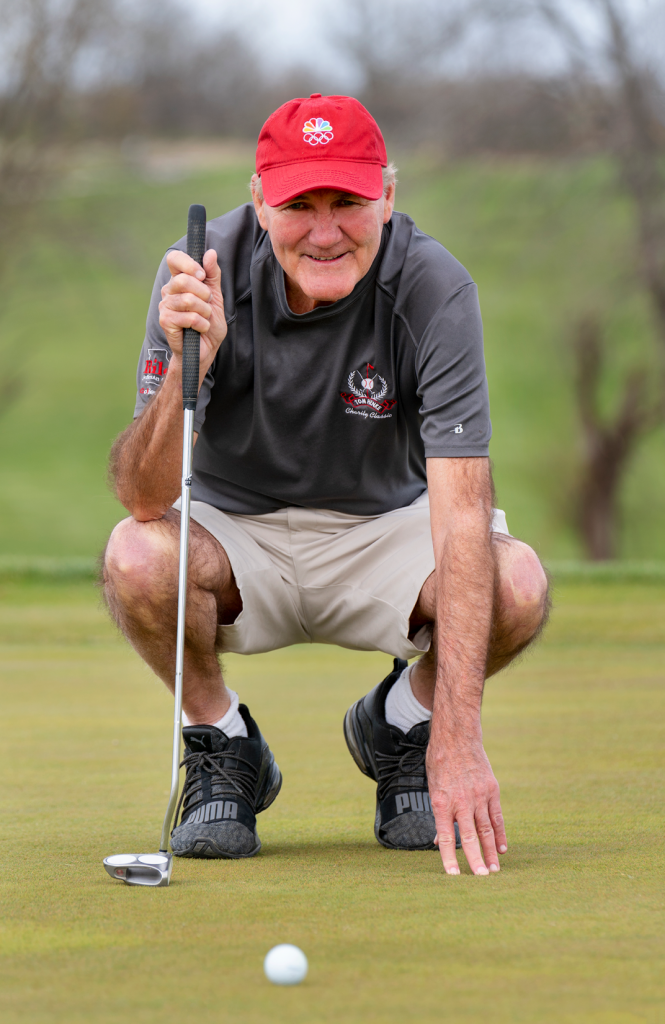 “He is by far the most optimistic person I know. He doesn’t stop smiling. When he sees a friend or stranger, his face lights up and you cannot keep from smiling back,” Brazas says.

The two met when Brazas, a Missouri Highway Patrol trooper, was called to investigate a suspicious person who was pointing a gun at drivers along Route WW. The suspect turned out to be Riek, and the gun turned out to be a radar gun Riek was using for a story about speeders. As the highway patrolman approached, Riek guiltily asked his cameraman, “Are we doing anything illegal?” His worries subsided when Brazas recognized him as the “guy from TV.”

Riek gets a good laugh out of telling the story. Just as he finds something to enjoy in most of the other stories he tells. While at KOMU, as anchor he had a clothing allowance, a necessity for being part of a formal news setting. Of course, in speaking of the clothing allowance, Riek changes what could be a routine fact into one of his stories. “I must have had about 80 ties,” he says. “On my last day, I brought them to the station and had a sign, saying “take up to three.” He chuckles at the thought of those ties still being on air and having a second life. Like Riek, the ties are colorful and bright — just a small part of the legacy he leaves behind.