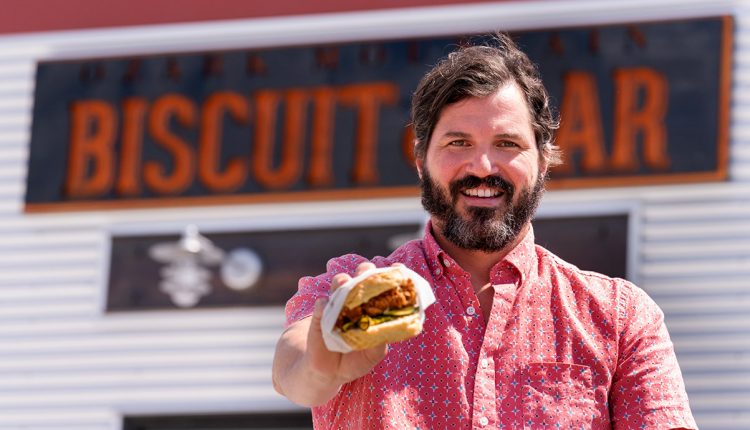 A Grab-and-Go No More

Sometimes the best things in life start out in a whirlwind of chaos. Such is the story of the Ozark Mountain Biscuit Company.

Flashback to August 2013: The truck’s production is behind schedule with the manufacturer in Florida, but its debut was scheduled for that weekend. Owner Bryan Maness flies to Florida to drive the truck back to CoMo — and rolls into town the night before the event. The health department gives approval for a limited menu since they didn’t even have time for a full inspection, and the very next day the Ozark Mountain Biscuit Co. food truck served their brag-worthy biscuits for the first time ever at Pridefest at Flat Branch Park.

What some might take as a foreboding sign, Maness just rolled with the punches and eventually made Ozark Mountain what it is today: a biscuit brick and mortar.

“We wanted the opportunity to give our clientele more diverse menu options,” Maness says. “Plus, we wanted to have a place where we could sit down and eat with folks. The food truck is always grab-and-go, and we never got to see folks after they enjoyed the meal.”

With a permanent building comes a few perks: A more diverse menu, beer and cocktails are on the horizon. “We realized people don’t always only want a biscuit sandwich,” Maness says. “Our food is Midwest-style, so the biscuit will always be a centerpiece, but we will also have soups, sandwiches and entrees.”

For example, Sunday nights will offer a family-style all-natural fried chicken dinner. The restaurant’s all-day menu will feature breakfast, brunch and lunch with salads and sharing plates, and in the evening will have a rotation of dinner plates including a braised-then-seared short rib and a few seafood options.

Our menu started off pretty basic,” Maness says. “Since then, we’ve added more seasonal items such as local green tomatoes for our Haughty Hillbilly biscuit sandwich. We’ve diversified some of the basic biscuit sandwiches from something you could get at any breakfast restaurant to something more diverse.”

With their location being right next to Logboat Brewing Co., Maness says they knew the area had a high beer saturation. “We know the market is cornered on that front, so we’re going to offer innovative takes on classic cocktails.” But, the restaurant will also have Logboat, Broadway Brewery and other Missouri breweries on tap, such as Second Shift.

If you’re a fan of the walking biscuit, don’t fret. The food truck will still operate at local events such as Friday nights at Cooper’s Landing and will be at the Columbia Farmers Market Saturdays as well.

“We really enjoy the support that the community has given us on our almost eight years of operation and we are looking forward to putting down roots and becoming a fixture of the CoMo dining scene for years to come.”

All photos by L.G. Patterson