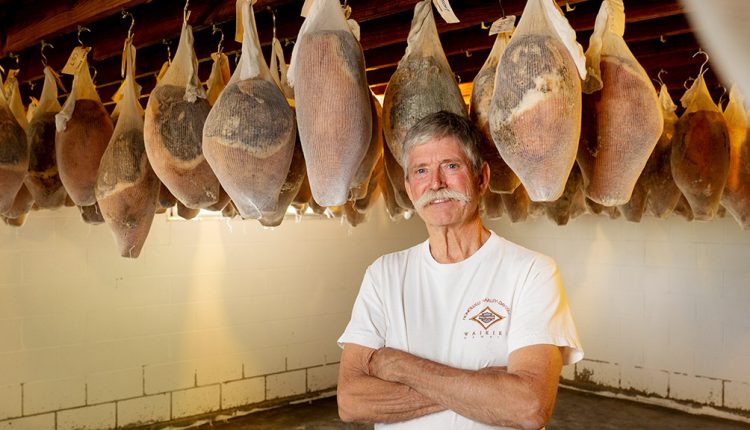 Steve Baumgartner, the owner of Baumgartner’s Boone County Cured Hams, thought his mentor, Arnold Winkler, was keeping the curing recipe a secret. But that wasn’t the case. These three ingredients — plus a ham — add the perfect flavor to Boone County cured hams.

Baumgartner was just 25 years old when he approached Winkler about learning the curing business. “I would buy a country ham every Christmas from Arnold and Albert Winkler for my father. In 1977, I told Arnold that if he needed help, I’d volunteer my time to learn about the business.” He worked with Winkler for 10 years and cured 600 hams — 125 each year — while Winkler introduced him to the business.

In 1988, Baumgartner and his wife, Lynda, moved to Rocheport and built a steel ham building like the Winkler’s on the property. For the next 33 years, he continued to cure hams and sell them on his website boonecountyhams.com.

“I’m following the curing process of the Winklers exclusively. I didn’t invent it — I’m merely carrying on the Boone County tradition,” Baumgartner says. At that time, Bud Gardner was the only other person curing hams commercially.  Many people cured hams, but those two were inspected by the USDA.

“It’s somewhat a lost art. I do it to continue the tradition of curing — it’s strictly for the tradition and fun of it. The part I enjoy the most is listening to the stories of those who remember curing hams with their grandfathers, for example. They’ll talk about the times they spent curing, aging and eating county hams. They remember the salty taste and delicious smell of home cured hams.”

The smell of a delicious ham breakfast and the feel of rubbing salt onto a ham is something that Baumgartner would like to pass on to the youth. Every year he works with 4-H students who learn the almost-lost art. He instructs them on applying the correct portion of cure onto the ham, rubbing it, encasing them in paper and netting and hanging them up. They hang until the cure moves into the muscle of the meat — the process takes around 40 days. Next the hams go into a 3- to 6-month aging process. The longer it ages, the more flavor it develops.

“This year we had 85 kids come and go through the ham curing process,” Baumgartner says. “We have worked with many 4-H and FFA members in the past years. They learn to cure hams, trim them and take them to the fairs to be judged. I’m strict in that I want the youth to do the work. Sometimes they are so young they can barely see over the table. I want them to wrestle with the ham and do it themselves.”

And what about the future of curing Boone County hams?  “I would love to introduce some young person to the tradition of curing hams. Just like the recipe, I have no secrets. I would bend over backwards to help them get established and learn the process,” he says. “But that person hasn’t found me yet.”