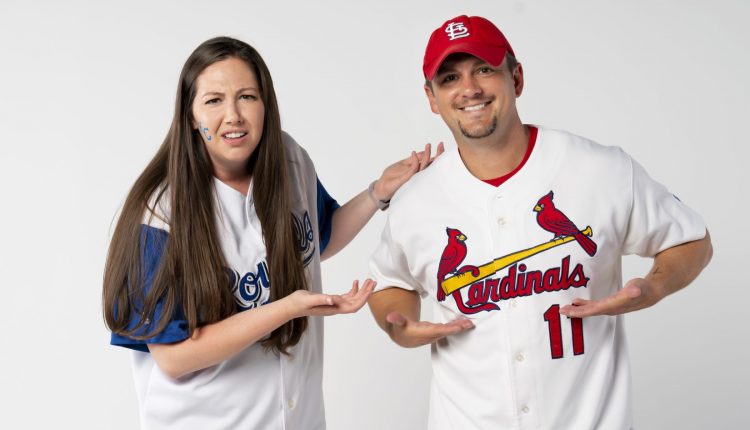 Lauren and Aric Engage in a Team Tiff.

Each issue, two on-air talents from two different Zimmer Radio Group stations will voice their opinions on what you might call a controversial topic. This issue, check out Lauren’s and Aric’s takes on the best baseball team in Missouri.

Ok listen. I don’t NOT like The Cardinals. If my friends and family are going to a Cardinals game, I’ll happily tag along. BUT I’ll never love them like the Royals.

My love affair with the Royals started when I was in college. I went to school in Warrensburg and every few weeks, we’d take a road trip for a game. Back then, it was a much smaller stadium; a Jumbotron didn’t even seem like a possibility at that point. A seat in the student section was $8 on Wednesdays and hotdogs were a dollar. My earliest memories at the K involve partying with my friends, making new ones and a guy who was there every week in a Scooby Doo costume.

We celebrated the wins, and we kept on loving them despite the losses. That’s my favorite thing about Royals fans; no fair-weather fans in this crowd. Every single one of us is a fan because we’ve fallen in love with the sportsmanship, the comradery, the Salvy Splash, and the “lemonade lemonade lemonaaaaaaade (WOO!)” guy.

Plus, our parking lot is one giant tailgate party before every game and parking at Cards games is GARBAGE.

I became a die-hard Cardinals fan at 6 years old. My parents pulled me out of first grade to drive three hours from Sedalia to St. Louis to see game six of the 1987 NLCS between the Cardinals and Giants.

Ozzie Smith backflipped onto the field — Busch Stadium was SO LOUD that day. John Tudor pitched and we won 1-0 when Jose Oquendo scored on a sacrifice fly in foul territory.

From that moment on I’ve been a die-hard Cardinals fan. Let’s be honest, 11 World Series Championships are a LOT better than two (and really we all know 1985 was a screw job thanks to Don Denkinger, so it should be 12 versus one).

When you get to see 3 million fans fill Busch Stadium practically every year since 1998, it’s pretty special. The Cardinals are truly a part of summer across Missouri. Do we really need to mention their long-standing success? If you want to teach your kids the right way to play and watch baseball, there’s a name for it: The Cardinals Way. And it dominates not just the state of Missouri, but because of the incredibly large Cardinals Radio Network, the majority of the Midwest. Go Cards!

See you at Busch Stadium!

In the Right Direction