Shawn Oberle, head brewer at Broadway Brewery, hardly made a beeline for brewing. “I was a business marketing major at Mizzou and had been more on the business operations side for a few years,” he explains. I was finishing up a job around 2014, and had kind of a blank slate to figure out what I wanted to do.

“I was always tinkering with stuff at home as a kid in the kitchen with my Mom. So that kind of culinary side mixed with the creative side kind of led me into brewing.”

Oberle had already done some home brewing in college and a little post-college. “Nothing that was super spectacular by any means,” he says. “I made some really bad home brews with my old roommates.”

He reached out to the former head brewer at Broadway and then apprenticed under him, working his way up to assistant. He then quickly moved up to head brewer after his mentor left for another brewery, essentially throwing him into the deep end of the vat.

Oberle faced a massive learning curve, and a minute timeframe. With 12 years of brewing under its belt, Broadway was well-established. Oberle was brand new and making beers with expected taste profiles that people had been drinking for years. “Being able to produce something consistently and jumping into learning was certainly its own challenge,” he says. 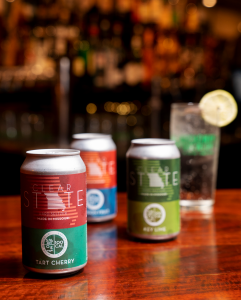 The Segue Into Seltzers

“The seltzer was a big project for both of us. It’s a subset of Broadway Brewery but we leaned into it in a way try to separate it as kind of a new company in and of itself,” he explains.

They wanted the new seltzers to reflect on the state of Missouri in both name and branding, to be clearly from the Show-Me state, christening the line “Clear State.” They also wanted the logo, label and packaging to be really colorful and lively. Katz designed the logo.

Oberle says, “For me personally, as a producer and brewer and a tinkerer in a lot of things, it’s another area I can explore and learn about. Seltzer is kind of a blank slate — you can mess around with different flavors and flavor profiles. It’s really kind of endless.”

Seltzers are … interesting, ” Oberle says. “From their very beginnings, White Claw was kind of the big one that tipped the scales. They’ve really grown in their segment and taken a lot of the beer share.

“You had this spike in people who are drinking less soda and drinking more soda water. It kind of follows in tandem with that: ‘I want something that’s not laden with sugar, carbs and calories but I still want alcohol.’

“For us, as a brewery, seltzer falls in the camp of what the government tells us we can make and what it’s classified as. Seltzer’s classified as a beer, technically,”  he explains.

He says originally, there was a kind of feminity/masculinity question around seltzers. “Like guys thinking, well, I can’t be seen drinking seltzer. Those stigmas that have existed in the market can be challenging for consumers. I do feel like there’s a shift in that,” he notes. It’s largely a non-issue today, Oberle says. “Whatever you like drinking, drink that.”

The first offerings from the new company are Key Lime, Passion Fruit and Tart Cherry, available in either single flavor six-packs or a 12-pack variety. “We started with some that I think are friendly for consumers to at least give them a try. Then we plan to get more creative,” Oberle says.

“I really do believe seltzers are here to stay. Not necessarily every brand that’s out there. But there’s no shortage of demand for them, so it makes sense on that level.”