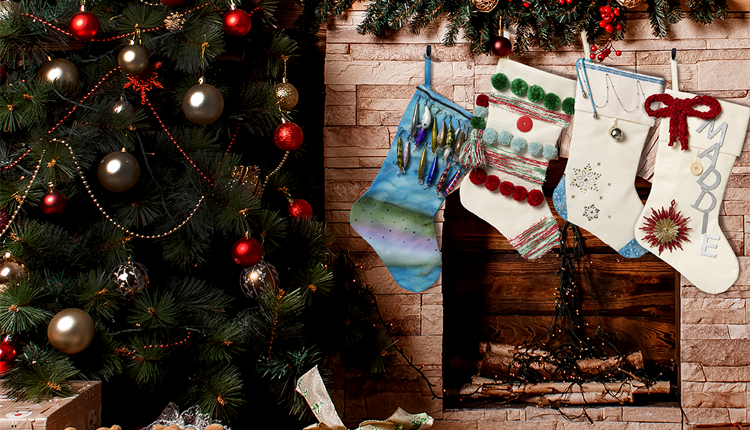 Hanging the Stockings with Personality

ICM Staffers Get Creative With A Christmas Tradition. 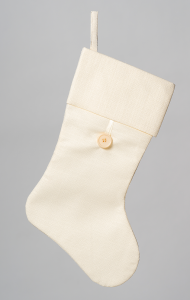 The holidays are filled with so many wonderful traditions, but there’s something special about hanging that Christmas stocking.

So the Inside Columbia staff decided to put our best twists on one of this year’s hot holiday trends – linen stockings. We picked up some plain linen stockings at Hobby Lobby ($10.99 each, though they were 50% off at time of purchase), and divvied them up between Art Director Tim Flanner, Graphic Designer Madelyn Jones, Associate Editor Peg Gill and Editor Madeleine Leroux. Get more details on each of our stockings below.

Happy holidays from Inside Columbia! 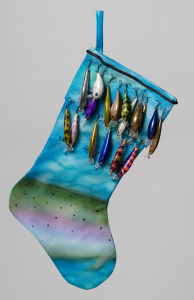 “What better way to decorate my stocking than channeling my passion. I airbrush my own lures, so I figured why not airbrush a stocking and hook some of my lures into it? It might be a bit dangerous for Santa to drop in some gifts, but the fish will like it. Being an avid fisherman, all the tools needed were already on hand, and the whole project took less than an hour.” 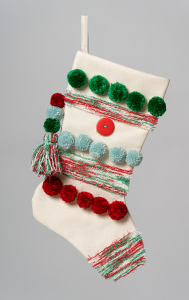 “I got the materials for my stocking at JOANN Fabric and Crafts. I handmade the tassel and pom poms displayed on my stocking. ‘The Neon Tea Party’ (https://theneonteaparty.com/online-craft-studio/pom-poms-tassels/) has a step-by-step tutorial to make both of these items.

I was gifted the Loome Pom Pom & Tassel Tool ($12) from the same website, which made the process a lot easier! If you do not wish to purchase this tool, you can create a makeshift one out of cardboard.

For the pom poms, I used acrylic yarn in the colors Really Red, Grass Pelouse and Spa Blue. These are around $5 a piece. While following the website’s tutorial, I also added an extra step. I kept the string that ties around the pom pom long, instead of cutting it. This was so I could attach it to the stocking with an embroidery needle. You can also glue it on the stocking with fabric glue.

For the tassel, I used Red Heart Scrubby Yarn in the style ‘Jolly’ ($4.99). I used the same yarn between my pom poms and the bottom of my stocking. I glued it on using the Quick Dry Fabric Fusion and I chose the mini pack ($6.49).” 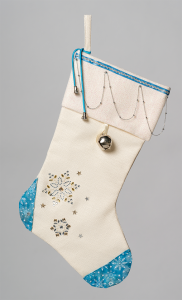 “One of my two dear sisters-in-law, Barb, is Jewish. Hence, my brother Chris’s family celebrates ‘Hannamas.’ I know other blended faith families who christen it ‘Christmakkah.’

This was the inspiration for my stocking — to portray a sense of inclusion and unity — something all too much missing from our divisive, dismissive world today. The holiday season is meant to be one of peace and joy for all mankind. (Womankind — whatever is your indentikind! Let’s just say, humankind. Though the ‘kind’’ has often been absent lately.)

Everything that adorns my stocking is something I had on hand. Besides writing, I really love pursuing other creative outlets, including sewing and flower arranging. I also thoroughly enjoy ‘MacGyvering’ things!

The blue snowflake fabric, silver rick rack, turquoise ribbon and turquoise cord piping were from two stockings I was commissioned to make last year by a co-worker of my daughter’s.

The jingle bell came from my ‘Christmas stuff’ stash. The stick-on snowflakes and stars were left over from my granddaughter’s stocking, which I made last year. The two silver ‘caps’ on the turquoise cord piping (which dangled from the stocking’s hanger loop) were from a multi-pack I bought to gussie up a boring belt on a summer dress. The shimmery net fabric on the cuff of the stocking was from my Halloween costume. I went as Pegasus and the fabric gave my wings that needed iridescence. Finally, the silver chain that drapes in loops across the stocking’s cuff is actually a lanyard for my reading glasses. I had bought a pack of four and deemed that one too dainty for the duty!” 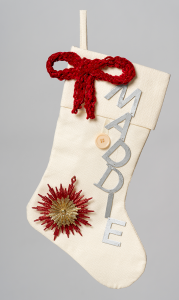 “I’m not a crafty person — my mother will be the first one to tell you that. But I love the idea of crafting and the personalization that becomes possible through such projects. I just usually lack the patience to see a project through to the end, not to mention the talent to make it look the way I had imagined.

So for my stocking, I knew I needed to keep it simple. Manageable. Alright, I’ll just say it: Easy.

I looked up some ideas online to find something I could model mine after. The inspirational stocking I used had letters hanging off it with beautiful silver jingle bells attached and a perfect, large knit bow that went across the top.

Because I’m not crafty, I did not have any tools on hand, so I took a trip to Hobby Lobby and spent about $80 on materials. (I have a lot leftover: so many letters, an entire jar of metallic silver paint, embroidery needles, an awl, a spool of thread, a huge ball of the softest yarn ever, not to mention the brushes, etc.) I decided to go with red and silver as my overall color scheme, cause it’s both Christmasy and matches colors I like. But when I couldn’t find a good ornament that both fit my color scheme and the image I had in mind, gold became incorporated.

I tried sewing the letters and the ornament — it wasn’t great. Thanks to a friend with a hot glue gun, things were salvaged.

The hardest part of this project for me was the red knit bow placed in the corner. It’s done by finger knitting, which is something I had never heard of before October. But, after several YouTube videos, I gave it a try. And another try. And another. (The sounds of my exasperation as I would give up on yet another attempt caused my boyfriend some concern.) The main issue for me was getting a strand long enough to make a bow. Ultimately, I improvised by making two shorter strands and using those to create a bow that was then hot glued onto my stocking as the final touch. (At this point, I will note that my stocking spells out ‘Maddie’ because that is how I’m known around the office. Two Madeleine’s — regardless of spelling differences — required a nickname.)

I love the way it turned out, but I’ll be honest: I have no desire to continue finger knitting. But I can point out some useful tutorials if you’re ever interested!”